White Americans are Americans who are considered or reported as white. The United States Census Bureau defines white people as those "having origins in any of the original peoples of Europe, the Middle East, or North Africa."[2] Like all official U.S. racial categories, "white" has a "not Hispanic or Latino" and a "Hispanic or Latino" component,[3] the latter consisting mostly of White Mexican Americans and White Cuban Americans. The term "Caucasian" is often used interchangeably with "white", although the terms are not synonymous.[4][5][6][7][8][9]

Definitions of who is "White" have changed throughout the history of the United States.

The term "White American" can encompass many different ethnic groups. Although the United States Census purports to reflect a social definition of race, the social dimensions of race are more complex than Census criteria. The 2000 U.S. census states that racial categories "generally reflect a social definition of race recognized in this country. They do not conform to any biological, anthropological or genetic criteria."[12]

The Census question on race lists the categories White or European American, Black or African American, American Indian and Alaska Native, Native Hawaiian or Other Pacific Islander, Asian, plus "Some other race", with the respondent having the ability to mark more than one racial and\or ethnic category. The Census Bureau defines White people as follows:

"White" refers to a person having origins in any of the original peoples of Europe, the Middle East or North Africa. It includes people who indicated their race(s) as "White" or reported entries such as Irish, German, Italian, Lebanese, Arab, Moroccan or Caucasian.[2]

In U.S. census documents, the designation White overlaps, as do all other official racial categories, with the term Hispanic or Latino, which was introduced in the 1980 census as a category of ethnicity, separate and independent of race.[13][14] Hispanic and Latino Americans as a whole make up a racially diverse group and as a whole are the largest minority in the country.[15][16] 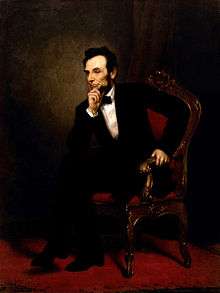 President Abraham Lincoln was descended from Samuel Lincoln, and was of English and Welsh ancestry. 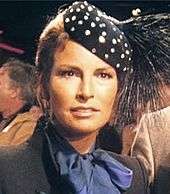 Actress Raquel Welch of Spanish (via Bolivia) and English ancestry back to the Mayflower.[17]

In cases where individuals do not self-identify, the U.S. census parameters for race give each national origin a racial value.

Additionally, people who reported Muslim (or a sect of Islam such as Shi'ite or Sunni), Jewish, Zoroastrian, or Caucasian as their "race" in the "Some other race" section, without noting a country of origin, are automatically tallied as White.[18] The US Census considers the write-in response of "Caucasian" or "Aryan" to be a synonym for White in their ancestry code listing.[19]

In the contemporary United States, essentially anyone of European descent is considered White. However, many of the ethnic groups classified as White by the U.S. Census, such as Jewish-Americans, Arab-Americans, and Hispanics or Latinos may not identify as, and may not be perceived to be, White.[20][21][22][23][24][25]

The definition of white has changed significantly over the course of American history. Among Europeans those not considered white at some point in American history include Italians, Greeks, Spaniards, Irish, Swedes, Germans, Finns, Russians and French.[25][26][27]

Early on in the United States, white generally referred to those of British ancestry or northern (Nordic) and northwestern (British and French) European descent.[28]

David R. Roediger argues that the construction of the white race in the United States was an effort to mentally distance slave owners from slaves.[29] The process of officially being defined as white by law often came about in court disputes over pursuit of citizenship.[30]

Critical race theory takes, as one of its founding influences, the nonfiction essays of James Baldwin, who argued that Whiteness was a fictional category, a construct without reference to any culture at all except for the purposes of domination and genocide. Scholars such as David Roediger, Paul Gilroy, and others have based some of their work on this notion.

As Whites, especially White Anglo-Saxon Protestants, or WASPs, are the dominant racial and cultural group, according to sociologist Steven Seidman, writing from a critical theory perspective, "White culture constitutes the general cultural mainstream, causing non-White culture to be seen as deviant, in either a positive or negative manner. Moreover, Whites tend to be disproportionately represented in powerful positions, controlling almost all political, economic, and cultural institutions."

Yet, according to Seidman, Whites are most commonly unaware of their privilege and the manner in which their culture has always been dominant in the US, as they do not identify as members of a specific racial group but rather incorrectly perceive their views and culture as "raceless", when in fact it is ethno-national (ethnic/cultural) specific, with a racial base component.[31]

Whites (non-Hispanic and Hispanic) made up 79.8% or 75% of the American population in 2008.[15][16][36][37] This latter number is sometimes recorded as 77.1% when it includes about 2% of the population who are identified as white in combination with one or more other races. The largest ethnic groups (by ancestry) among White Americans were Germans, followed by Irish and English.[38] In the 1980 census 49,598,035 Americans cited that they were of English ancestry, making them 26% of the country and the largest group at the time, and in fact larger than the population of England itself.[39] Slightly more than half of these people would cite that they were of "American" ancestry on subsequent censuses and virtually everywhere that "American" ancestry predominates on the 2000 census corresponds to places where "English" predominated on the 1980 census.[40][41]

White Americans are projected to remain the majority, though with their percentage decreasing to 72% of the total population by 2050. However, projections state that non-Hispanic Whites of that group will become less than 50% of the population by 2042 because Non-Hispanic Whites have the lowest fertility rate of any major racial group in the United States,[42] mass-immigration of other ethnic groups with higher birth rates, and because of intermarriage with Hispanic whites.

While over ten million white people can trace part of their ancestry back to the Pilgrims who arrived on the Mayflower in 1620 (this common statistic overlooks the Jamestown, Virginia foundations of America and roots of even earlier colonist-descended Americans, such as Spanish Americans in St. Augustine, Florida), over 35 million whites have at least one ancestor who passed through the Ellis Island immigration station, which processed arriving immigrants from 1892 until 1954. See also: European Americans.

According to the Census definition, White Americans are the majority racial group in almost all of the United States. They are not the majority in Hawaii, many American Indian reservations, parts of the South known as the Black Belt, the District of Columbia, all US territories, and in many urban areas throughout the country. Non-Hispanic whites are also not the majority in several southwestern states.

Although all large geographical areas are dominated by White Americans, much larger differences can be seen between specific parts of large cities.

States with the highest percentages of White Americans, as of 2007:[45]

States with the highest percentages of non-Hispanic Whites, as of 2007:[46] 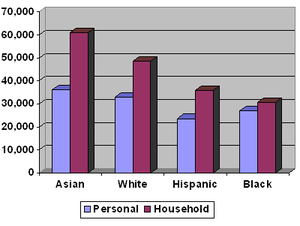 personal and household income
in the United States Census
in 2005

The poverty rates for White Americans are the second-lowest of any racial group, with 10.8% of white individuals living below the poverty line, 3% lower than the national average.[49] However, due to Whites' majority status, 48% of Americans living in poverty are white.[50]

White Americans' educational attainment is the second-highest in the country, after Asian Americans'. Overall, nearly one-third of White Americans had a Bachelor's degree, with the educational attainment for Whites being higher for those born outside the United States: 37.6% of foreign born, and 29.7% of native born Whites had a college degree. Both figures are above the national average of 27.2%.[51]

White Americans are more likely to live in suburbs and small cities than their black counterparts.[53]

Population by state or territory 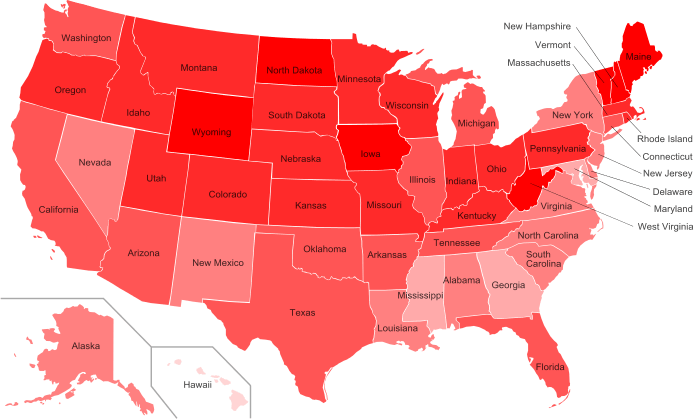 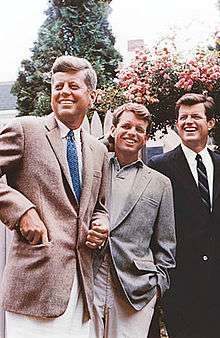 Three members of the Kennedy political dynasty, John, Robert and Edward. All eight of their great-grandparents emigrated from Ireland.

In his 1989 book Albion's Seed: Four British Folkways in America, David Hackett Fischer explores the details of the folkways of four groups of settlers from the British Isles that came to the American colonies during the 17th and 18th centuries from distinct regions of Britain and Ireland. His thesis is that the culture of each group persisted (albeit in modified form), providing the basis for the modern United States.

According to Fischer, the foundation of America's four regional cultures was formed from four mass migrations from four regions of the British Isles by four distinct ethno-cultural groups. New England's formative period occurred between 1629 and 1640 when Puritans, mostly from East Anglia, settled there, thus forming the basis for the New England regional culture. The next mass migration was of southern English Cavaliers and their working class English servants to the Chesapeake Bay region between 1640 and 1675. This spawned the creation of the American Southern culture.

Then, between 1675 and 1725, thousands of Irish, Cornish, English and Welsh Quakers plus many Germans sympathetic to Quaker ideas, led by William Penn, settled the Delaware Valley. This resulted in the formation of the General American culture, although, according to Fischer, this is really a "regional culture", even if it does today encompass most of the U.S. from the mid-Atlantic states to the Pacific Coast. Finally, a huge number of settlers from the borderlands between England and Scotland, and from northern Ireland, migrated to Appalachia between 1717 and 1775. This resulted in the formation of the Upland South regional culture, which has since expanded to the west to West Texas and parts of the U.S. Southwest.

In his book, Fischer brings up several points. He states that the U.S. is not a country with one "general" culture and several "regional" culture, as is commonly thought. Rather, there are only four regional cultures as described above, and understanding this helps one to more clearly understand American history as well as contemporary American life. Fischer asserts that it is not only important to understand where different groups came from, but when. All population groups have, at different times, their own unique set of beliefs, fears, hopes and prejudices. When different groups came to America and brought certain beliefs and values with them, these ideas became, according to Fischer, more or less frozen in time, even if they eventually changed in their original place of origin.

Some White Americans have varying amounts of American Indian and Sub-Saharan African ancestry. In a recent study, Gonçalves et al. 2007 reported Sub-Saharan and Amerindian mtDna lineages at a frequency of 3.1% (respectively 0.9% and 2.2%) in American Caucasians (Please note that in the USA, "Caucasian" includes people from North Africa and Western Asia as well as Europeans).[57] Recent research on Y-chromosomes and mtDNA detected no African admixture in European-Americans. The sample included 628 European-American Y-chromosomes and mtDNA from 922 European-Americans[58]

Most Hispanic Americans self-identify racially as white in the US Census; however, a large amount of them, would rather consider themselves as ethnically mestizo (of mixed European and Native background) or mulatto (of mixed African and European background); for instance, just a tenth of those who considers themselves as mestizo or mulatto select multiracial on the census, preferring to answer just white in the census.[64] Genetic research has found that the average European admixture among self-identified White Hispanic Americans is 73% (the average for Hispanic Americans regardless of race is 65.1%), contrasting to that of non-Hispanic European Americans, whose European ancestry totals 98.6% in average.[62][65]