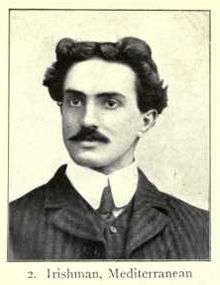 Irishman of Mediterranean type, from Augustus Henry Keane's Man, Past and Present (1899).

The Mediterranean race (also, Mediterranid race) is one of the sub-races into which the Caucasian race was categorized by most anthropologists in the late nineteenth to mid-twentieth centuries.[1] According to various definitions, it was said to be prevalent in Southern Europe, in Western Asia, Central Asia and north-western South Asia, in North Africa and the Horn of Africa, and in certain parts of the British Isles and Germany.[2][3][4][5][6][7][8] It is characterized by medium or shorter stature, long (dolichocephalic) or moderate (mesocephalic) skull, a narrow and often slightly aquiline nose, prevalence of dark hair and eyes,[9] and pink to reddish to light or dark brown skin tone; olive complexion being especially common.[10]

These differentiations occurred following long-standing claims about the alleged differences between the Nordic and the Mediterranean people. Such debates arose from responses to ancient writers who had commented on differences between northern and southern Europeans. The Greek and Roman people considered the Germanic and Celtic peoples wild, red haired barbarians. Aristotle argued that the Greeks were an ideal people because they possessed a medium skin-tone, in contrast to pale northerners and dark southerners. By the nineteenth century, long-standing cultural and religious differences between Protestant northwestern Europe and the Roman Catholic south were being reinterpreted in racial terms.[11]

In the nineteenth century, the division of humanity into distinct races became a matter for scientific debate. In 1870, Thomas Huxley argued that there were four basic racial categories (Xanthochroic, Mongoloid, Australioid and Negroid). The Xanthochroic race were the "fair whites" of north and Central Europe. According to Huxley,

On the south and west this type comes into contact and mixes with the "Melanochroi," or "dark whites"...In these regions are found, more or less mixed with Xanthochroi and Mongoloids, and extending to a greater or less distance into the conterminous Xanthochroic, Mongoloid, Negroid, and Australioid areas, the men whom I have termed Melanochroi, or dark whites. Under its best form this type is exhibited by many Irishmen, Welshmen, and Bretons, by Spaniards, South Italians, Greeks, Armenians, Arabs, and high-caste Brahmins...I am much disposed to think that the Melanochroi are the result of an intermixture between the Xanthochroi and the Australoids. It is to the Xanthochroi and Melanochroi, taken together, that the absurd denomination of "Caucasian" is usually applied.[12]

By the late nineteenth century, Huxley's Xanthochroi group had been redefined as the "Nordic" race, whereas his Melanochroi became the Mediterranean race. As such, Huxley's Melanochroi eventually also comprised various other dark Caucasoid populations, including the Hamites (e.g. Berbers, Somalis, northern Sudanese, ancient Egyptians) and Moors.[13]

William Z. Ripley's The Races of Europe (1899) created a tripartite model, which was later popularised by Madison Grant. It divided Europeans into three main subcategories: Teutonic, Alpine and Mediterranean.[14] Ripley noted that although the European Caucasoid populations largely spoke Aryan (Indo-European) languages, the oldest extant language in Europe was Basque. He also acknowledged the existence of non-European Caucasoids, including various populations that did not speak Aryan languages, such as Hamito-Semitic and Turkish groups.[15] 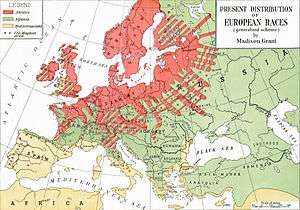 Distribution of European racial types, from Madison Grant's The Passing of the Great Race (1916). Mediterranean race is shown in yellow; green indicates the Alpine race; bright red is the Nordic race.

In Germany, Britain and the USA, it became common for "white supremacists" to promote the merits of the light-colored hair, light-colored eyes Nordic race as the most advanced of human population groups: the "master race". Southern/Eastern Europeans were deemed to be inferior, an argument that dated back to Arthur de Gobineau's Nordicist claims that racial mixing was responsible for the decline of the Roman Empire.[17] However, in southern Europe itself alternative models were developed which stressed the merits of Mediterranean peoples, drawing on established traditions dating from ancient and Renaissance claims about the superiority of civilization in the south.

The notion that Mediterranean peoples were responsible for the most important of ancient civilizations was a problem for the promoters of Nordic superiority. Giuseppe Sergi's much-debated book The Mediterranean Race (1901) argued that the Mediterranean race had likely originated from a common ancestral stock that evolved in the Sahara region in Africa, and which later spread from there to populate North Africa, the Horn of Africa, and the circum-Mediterranean region.[18] Sergi added that the Mediterranean race "in its external characters is a brown human variety, neither white nor negroid, but pure in its elements, that is to say not a product of the mixture of Whites with Negroes or negroid peoples."[19] He explained this taxonomy as inspired by an understanding of "the morphology of the skull as revealing those internal physical characters of human stocks which remain constant through long ages and at far remote spots[...] As a zoologist can recognise the character of an animal species or variety belonging to any region of the globe or any period of time, so also should an anthropologist if he follows the same method of investigating the morphological characters of the skull[...] This method has guided me in my investigations into the present problem and has given me unexpected results which were often afterwards confirmed by archaeology or history."[20]

According to Sergi, the Mediterranean race was the "greatest race of the world" and was singularly responsible for the most accomplished civilizations of antiquity, including those of Ancient Egypt, Ancient Greece, Ancient Persia, Ancient Rome, Carthage, Hittite Anatolia, Land of Punt, Mesopotamia and Phoenicia. The four great branches of the Mediterranean stock were the Libyans, the Ligurians, the Pelasgians and the Iberians.[21] Ancient Egyptians, Ethiopians and Somalis were considered by Sergi as Hamites, themselves constituting a Mediterranean variety and one situated close to the cradle of the stock.[22] To Sergi, the Semites were a branch of the Eurafricans who were closely related to the Mediterraneans.[23] He also asserted that the light-skinned Nordic race descended from the Eurafricans.[24]

According to Robert Ranulph Marett, "it is in North Africa that we must probably place the original hotbed of that Mediterranean race".[25]

Later in the 20th century, the concept of a distinctive Mediterranean race was still considered useful by theorists such as Earnest Hooton in Up From the Ape (1931) and Carleton S. Coon in his revised edition of Ripley's Races of Europe (1939). These writers subscribed to Sergi's depigmentation theory that the Nordic race was the northern variety of Mediterraneans that lost pigmentation through natural selection due to the environment.[26]

C. G. Seligman also asserted that "it must, I think, be recognized that the Mediterranean race has actually more achievement to its credit than any other, since it is responsible for by far the greater part of Mediterranean civilization, certainly before 1000 B.C. (and probably much later), and so shaped not only the Aegean cultures, but those of Western as well as the greater part of Eastern Mediterranean lands, while the culture of their near relatives, the Hamitic pre-dynastic Egyptians, formed the basis of that of Egypt."[27]

In the USA, the idea that the Mediterranean race included certain populations on the African continent was taken up in the early twentieth century by African-American writers such as W. E. B. Du Bois, who used it to attack white supremacist ideas about racial "purity". Such publications as the Journal of Negro History stressed the cross-fertilization of cultures between Africa and Europe, and adopted Sergi's view that the "civilizing" race had originated in Africa itself.[28]

H.G. Wells referred to the Mediterranean race as the Iberian race.[29]

After the 1960s, the concept of an exact Mediterranean race fell out of favor, though the distinctive features of Mediterranean populations continued to be recognized.[30][31][32][33] 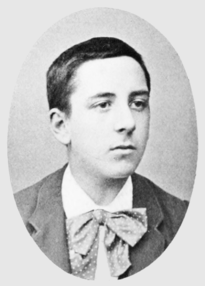 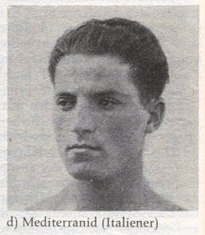 Italian man of Mediterranean type, from the Fischer Lexikon (1959)

The Mediterranean race was traditionally regarded as one of the primary Caucasoid races next to the Nordic, Alpine and Armenoid (Beals and Hoijer, An Introduction to Anthropology – 1953).[34]

The first Physical and Social description of the Mediterranean race (then termed "Celtic race") was given by the Scottish scientist William Rhind in 1851. In -Section XV – The Caucasian race and its sub-races- Rhind gave the following description:[35] "The Celtic Race (anc. Galatae, Pyreni), are characterised by a well-formed head, elongated from front to back, and moderate in breadth; face oval; features well defined and elegantly formed; complexion dark; dark brown or black eyes; black hair turning early gray; form middle size, handsome; feet and hands small. Mental powers quick, active, and energetic, rather than profound. Passions and affections strong. Fond of society, but not forgetful of injuries. Monarchial in their governments. They occupy the southern and insular parts of Europe."

According to William Z. Ripley, the marked features of the Mediterranean race were dark hair – dark eyes – long face – dolichocephalic skull and a variable narrow nose.[16]