The area that became Port Harcourt in 1912 was before that part of the farmlands of the Diobu village group of the Ikwerre, an Igbo sub-group.[16] The colonial administration of Nigeria created the port to export coal from the collieries of Enugu located 243 kilometres (151 mi) north of Port Harcourt,[17] to which it was linked by a railway called the Eastern Line, also built by the British.[2][17][18]

In 1956 crude oil was discovered in commercial quantities at Oloibiri, and Port Harcourt's economy turned to petroleum when the first shipment of Nigerian crude oil was exported through the city in 1958. Through the benefits of the Nigerian petroleum industry, Port Harcourt was further developed, with aspects of modernisation such as overpasses and city blocks.[3] Oil firms that currently have offices in the city include Royal Dutch Shell and Chevron.[19]

The port was built in 1912, but not given a name until August 1913, when the Governor of Nigeria, Sir Frederick Lugard, named it "Port Harcourt" in honor of Lewis Vernon Harcourt, then the Secretary of State for the Colonies.[14] The Ikwerre name for the city is Iguocha, which is loaned from the Igbo word "Ụ́gwụ́ Ọ́chá".[14]

Port Harcourt was founded in 1912 by Frederick Lugard, governor of both the Northern Nigeria Protectorate and the Southern Nigeria Protectorate.[21] Its purpose was to export the coal that geologist Albert Ernest Kitson had discovered in Enugu in 1909.[22] The colonial government caused the people of Diobu to cede their land, and in 1912 the building of a port-town was started.[12] Other villages that were later absorbed into the city included Oroworukwo, Mkpogua, and Rumuomasi;[23][24][25] In the creeks to the south of the original port were the fishing camps and grounds of the Okrika-Ijaw group.[14]

During the First World War, Port Harcourt was used as a point for military operations against the Central Powers in German Kamerun.[3][26] After the discovery of crude oil in Oloibiri in 1956, Port Harcourt exported the first shipload from Nigeria in 1958. Port Harcourt became the centre of the Nigerian oil economy[27] and it subsequently reaped benefits of its associations with the petroleum industry by undergoing modernisation and urbanisation.[3] Port Harcourt's growth is further due to its position as the commercial centre and foremost industrial city of the former Eastern Region; its position in the Niger Delta; and its importance as the centre of social and economic life in Rivers State. After the Republic of Biafra seceded from Nigeria in 1967 Port Harcourt fell to Nigerian forces on 19 May 1968. From an area of 15.54 km2 in 1914, Port Harcourt grew uncontrolled to an area of 360 km2 in the 1980s.[28] 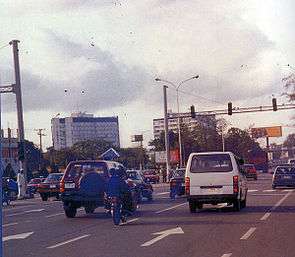 Port Harcourt features a tropical wet climate with lengthy and heavy rainy seasons and very short dry seasons. Only the months of December and January truly qualifies as dry season months in the city. The harmattan, which climatically influences many cities in West Africa, is less pronounced in Port Harcourt. Port Harcourt's heaviest precipitation occurs during September with an average of 367 mm of rain. December on average is the driest month of the year, with an average rainfall of 20 mm. Temperatures throughout the year in the city are relatively constant, showing little variation throughout the course of the year. Average temperatures are typically between 25 °C-28 °C in the city.

Port Harcourt is a major industrial centre as it has a large number of multinational firms as well as other industrial concerns, particularly business related to the petroleum industry. It is the chief oil-refining city in Nigeria and has two main oil refineries that process around 210,000 barrels of crude oil a day, both operated by the Port Harcourt Refining Company.[33][34] Rivers State is one of the wealthiest states in Nigeria in terms of gross domestic product and foreign exchange revenue from the oil industry, crude oil being its principal export earner. Face-me-I-face-you architecture is quite common in certain parts of Port Harcourt. The Point Block of Rivers State Secretariat is an icon of the city. An 18-story building, it is the tallest building in the South East and South South geopolitical zones combined.

Like every other city in the country's south, religion in Port Harcourt is predominantly Christianity. The Roman Catholics make up a significant portion of the Christian population.[35] There are scores of churches, parishes and priests within the Port Harcourt Catholic diocese.[36] The central church is the Corpus Christi Cathedral Parish in D-line.[37] The city is also home to other Christian denominations such as Anglicans, Methodists, Baptists, Presbyterians, and members of Evangelical and Pentecostal groups. Just a small number of residents adhere to the Islamic faith.[35]

The Port Harcourt Book Festival, formerly known as Garden City Literary Festival remains one of the city's most important and popular events since its inception in 2008. Established by the government of Chibuike Rotimi Amaechi, the yearly gathering improves local literacy levels, promotes reading habits among denizens, and benefits exhibitors seeking wider audience.[38] Throughout its annual run, Port Harcourt Book Festival has hosted renowned publishers such as Heinemann, Learn Africa Plc, Africana First Publishers and EPP Books Services. The festival currently continues to draw writers, literary connoisseurs, booksellers and publishers from every walk of life to the city.[39] In July 2012, UNESCO, IPA, IBF and IFLA named Port Harcourt the World Book Capital for the year 2014, making her the 14th city in the world to be selected as World Book Capital and the first in Black Africa.[40][41]

Aside from being the oil capital, Port Harcourt is also known for the vibrant late-night activities and entertainment scene. There are several public houses, lounges, clubs, dance bars and restaurants spread out around the city. Partyers and revellers tend to spend a chunk of their night time at New GRA, where most of the bars and high-end nightclubs are located. Uptempo and club-friendly music can be heard in nearly every corner of the city at night. There have been increases in sex-oriented businesses including strip clubs and brothels.[42] Prostitutes who operate out of these red-light districts mainly fall in the 18-30 age bracket and may charge as high as ₦25,000 a night, if not more.[43]

Several institutions of tertiary education in Port Harcourt offer a wide range of professionally-accredited programmes and qualifications. Most of these institutions are publicly funded while others are run by private entities. The University of Port Harcourt was ranked 6th in Africa and 1st in Nigeria by Times Higher Education in 2015.[53] The federal government owned university has its main campus at Choba district.

Media in Port Harcourt consists largely of print, online and broadcast. Information is generally disseminated to the public through radio, television, newspapers, magazines and the internet. The government owns a number of the existing communications media, although, some private media is permitted. As a regulatory authority, the Rivers State Ministry of Information and Communications is responsible for overseeing the entire broadcasting system, as well as promoting competition, and ensuring the provision of qualitative services throughout the city. Since English is much more popular in the country's urban areas, media content such as publications, news, radio and television programmes are available mostly in the English language.[55]

In print media, the largest-circulated daily newspaper published in Port Harcourt is The Tide. It is state supported and has an online version. Another popular newspaper is the weekly tabloid National Network which is owned by local politician Jerry Needam.[56] Additionally, other noteworthy papers like The Neighbourhood published by Nativity Communications Company and The Newswriter published by Writers House have begun competing for market presence and are both headquartered in the metropolis.[57][58]

Radio is an important mass medium in these parts. Not only has it become a strong source of news and entertainment, it is wide reaching and has proved a cheap means to reach a mass audience. Many of Port Harcourt's radio stations are in private hands with just a few are state owned. Radio Rivers, founded 1981 offers programs in English and various indigenous languages. Its operator is the Rivers State Broadcasting Corporation (RSBC).[59] As of December 2013, more than 5 local FM stations some of which were privately owned by media conglomerates Silverbird Group, South Atlantic Media, Globe Broadcasting and Communications and The Multimesh Company were already commercially licensed.[60]

There's an international airport, Port Harcourt International Airport on the outskirts of the city, a Nigerian Air Force (NAF) base which is the location of the only other airport used by commercial airlines Aero Contractors and Air Nigeria for domestic flights, two seaports (FOT Onne, Port Harcourt Wharf), and two stadiums (Sharks Stadium, also the civic center and Liberation Stadium) located in Elekahia. The city is sprawling in nature as building codes and zoning regulations are poorly enforced. Land is cleared and "lean-to" buildings constructed sometimes overnight. This adds to flooding and sanitation problems since with no proper drainage or sewer system, parts of the city flood during the very heavy monsoon-type rains that fall for half the year.

Port Harcourt is the leading hub for medical services in Rivers State. Many healthcare facilities including hospitals and research facilities are located in Port Harcourt.[61] The city has a prominent tertiary health institution University of Port Harcourt Teaching Hospital (UPTH) is situated on East West Road.[62]

Government hospitals are widely favoured and caters to a larger pool of patients. One of the oldest is Braithwaite Memorial Specialist Hospital. Originally founded in 1925, the 375-bed facility provides general and specialist medical and surgical services along with a range of diagnostic and support services.[63] Between 2009 and 2013, the Rivers State government commissioned two additional hospitals. This includes Kelsey Harrison Hospital and the Rivers State Dental and Maxillofacial Hospital.[64]

Some other notable hospitals in the city are Meridian Hospital and Rehoboth Specialist Hospital which are private.[65]

Port Harcourt Water Corporation (PHWC) was established pursuant to the Water Sector Development Law #7 of 2012 to replace the former Rivers State Water Board and to ensure the provision of potable drinking water and waste water treatment services. The corporation formally took off in September 2014 with the recruitment of the pioneer Managing Director, Kenneth Anga with a mandate to convert it to a self-sustaining public service corporation.

Under the leadership of Governor Chibuike Amaechi plans have been announced for the creation of a new city to be called Greater Port-Harcourt City.[66] The new city is to be located close to Port-Harcourt International Airport.[67] The total coverage area for the Greater Port Harcourt city development is 1900 km2 spanning eight local governments in Rivers State, including Ogu Bolo, Eleme, Ikwere, Etche, Obio Akpor, Okrika.

Port Harcourt has the following sister city relationships, according to Sister Cities International: