Pre-Socratic philosophy is ancient Greek philosophy before Socrates and schools contemporary to Socrates that were not influenced by him.[1] In Classical antiquity, the Presocratic philosophers were called physiologoi (Greek: φυσιόλογοι; in English, physical or natural philosophers).[2] Aristotle called them physikoi ("physicists", after physis, "nature") because they sought natural explanations for phenomena, as opposed to the earlier theologoi (theologians), whose philosophical basis was supernatural.[3] Diogenes Laërtius divides the physiologoi into two groups: Ionian, led by Anaximander, and the Italiote, led by Pythagoras.[4]

Hermann Diels popularized the term pre-socratic in Die Fragmente der Vorsokratiker (The Fragments of the Pre-Socratics) in 1903. However, the term pre-Sokratic was in use as early as George Grote's Plato and the Other Companions of Sokrates in 1865. Edouard Zeller was also important in dividing thought before and after Socrates.[5] Major analyses of pre-Socratic thought have been made by Gregory Vlastos, Jonathan Barnes, and Friedrich Nietzsche in his Philosophy in the Tragic Age of the Greeks.

It may sometimes be difficult to determine the actual line of argument some Presocratics used in supporting their particular views. While most of them produced significant texts, none of the texts has survived in complete form. All that is available are quotations by later philosophers (often biased) and historians, and the occasional textual fragment.

Others concentrated on defining problems and paradoxes that became the basis for later mathematical, scientific and philosophic study.

Later philosophers rejected many of the answers the early Greek philosophers provided, but continued to place importance on their questions. Furthermore, the cosmologies proposed by them have been updated by later developments in science. 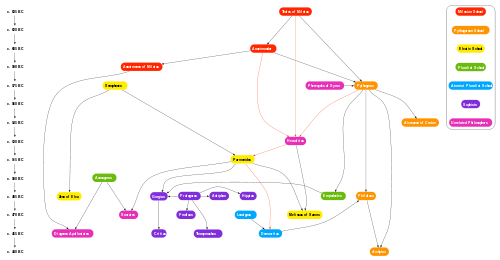 Graphical relationship among the various pre-socratic philosophers and thinkers; red arrows indicate a relationship of opposition.

Western philosophy began in ancient Greece in the 6th century BCE. The Presocratics were mostly from the eastern or western fringes of the Greek world. Their efforts were directed to the investigation of the ultimate basis and essential nature of the external world.[7] They sought the material principle (archê) of things, and the method of their origin and disappearance.[7] As the first philosophers, they emphasized the rational unity of things, and rejected mythological explanations of the world. The Presocratic thinkers present a discourse concerned with key areas of philosophical inquiry such as being and the cosmos, the primary stuff of the universe, the structure and function of the human soul, and the underlying principles governing perceptible phenomena, human knowledge and morality.

Only fragments of the original writings of the presocratics survive (many entitled Peri Physeos, or On Nature, a title probably attributed later by other authors).[8] The knowledge we have of them derives from accounts - known as doxography - of later philosophical writers (especially Aristotle, Plutarch, Diogenes Laërtius, Stobaeus and Simplicius), and some early theologians (especially Clement of Alexandria and Hippolytus of Rome).

However, the translation of Peri Physeos as On Nature may be misleading: the "on" normally gives the idea of an "erudite dissertation", while "peri" may refer in fact to a "circular approach"; and the traditional meanings of "nature" for us (as opposition to culture, to supernatural, or as essence, substance, opposed to accident, etc.) may be in contrast with the meaning of "physeos" or "physis" for the Greeks (referring to an "originary source", or "process of emergence and development").[9]

The first Presocratic philosophers were from Miletus on the western coast of Anatolia. Thales (624-546 BCE) is reputedly the father of Greek philosophy; he declared water to be the basis of all things.[7] Next came Anaximander (610-546 BCE), the first writer on philosophy. He assumed as the first principle an undefined, unlimited substance without qualities (apeiron), out of which the primary opposites, hot and cold, moist and dry, became differentiated.[7] His younger contemporary, Anaximenes (585-525 BCE), took for his principle air, conceiving it as modified, by thickening and thinning, into fire, wind, clouds, water, and earth.[7]

The practical side of philosophy was introduced by Pythagoras of Samos (582-496 BCE). Regarding the world as perfect harmony, dependent on number, he aimed at inducing humankind likewise to lead a harmonious life. His doctrine was adopted and extended by a large following of Pythagoreans who gathered at his school in south Italy in the town of Croton.[7] His followers included Philolaus (470-380 BCE), Alcmaeon of Croton, and Archytas (428-347 BCE).

Heraclitus of Ephesus on the western coast of Anatolia in modern Turkey (535-475 BCE) posited that all things in nature are in a state of perpetual flux, connected by logical structure or pattern, which he termed Logos. To Heraclitus, fire, one of the four classical elements, motivates and substantiates this eternal pattern. From fire all things originate, and return to it again in a process of eternal cycles.

The Eleatic School, called after the town of Elea (modern name Velia in southern Italy), emphasized the doctrine of the One. Xenophanes of Colophon (570-470 BCE) declared God to be the eternal unity, permeating the universe, and governing it by his thought.[7] Parmenides of Elea (510-440 BCE) affirmed the one unchanging existence to be alone true and capable of being conceived, and multitude and change to be an appearance without reality.[7] This doctrine was defended by his younger countryman Zeno of Elea (490-430 BCE) in a polemic against the common opinion which sees in things multitude, becoming, and change. Zeno propounded a number of celebrated paradoxes, much debated by later philosophers, which try to show that supposing that there is any change or multiplicity leads to contradictions.[7] Melissus of Samos (born c. 470 BCE) was another eminent member of this school.

Empedocles of Agrigentum (490-430 BCE) was from the ancient Greek city of Akragas (Ἀκράγας), Agrigentum in Latin, modern Agrigento, in Sicily. He appears to have been partly in agreement with the Eleatic School, partly in opposition to it. On the one hand, he maintained the unchangeable nature of substance; on the other, he supposes a plurality of such substances - i.e. four classical elements, earth, water, air, and fire. Of these the world is built up, by the agency of two ideal motive forces - love as the cause of union, strife as the cause of separation.[7] Anaxagoras of Clazomenae (500-428 BCE) in Asia Minor also maintained the existence of an ordering principle as well as a material substance, and while regarding the latter as an infinite multitude of imperishable primary elements, he conceived divine reason or Mind (nous) as ordering them. He referred all generation and disappearance to mixture and resolution respectively. To him belongs the credit of first establishing philosophy at Athens.[7]

The first explicitly materialistic system was formed by Leucippus (5th century BCE) and his pupil Democritus of Abdera (460-370 BCE) from Thrace. This was the doctrine of atoms - small primary bodies infinite in number, indivisible and imperishable, qualitatively similar, but distinguished by their shapes. Moving eternally through the infinite void, they collide and unite, thus generating objects which differ in accordance with the varieties, in number, size, shape, and arrangement, of the atoms which compose them.[7]

The last of the Presocratic natural philosophers was Diogenes of Apollonia from Thrace (born c. 460 BCE). He was an eclectic philosopher who adopted many principles of the Milesian school, especially the single material principle, which he identified as air. He explained natural processes in reference to the rarefactions and condensations of this primary substance. He also adopted Anaxagoras' cosmic thought.

The Sophists held that all thought rests solely on the apprehensions of the senses and on subjective impression, and that therefore we have no other standards of action than convention for the individual.[7] Specializing in rhetoric, the Sophists were more professional educators than philosophers. They flourished as a result of a special need at that time for Greek education. Prominent Sophists include Protagoras (490-420 BCE) from Abdera in Thrace, Gorgias (487-376 BCE) from Leontini in Sicily, Hippias (485-415 BCE) from Elis in the Peloponnesos, Prodicus (465-390 BCE) from the island of Ceos, and Thrasymachus (459-400 BCE) from Chalcedon on the Bosphorus.

This list includes several men, particularly the Seven Sages, who appear to have been practical politicians and sources of epigrammatic wisdom, rather than speculative thinkers or philosophers in the modern sense.