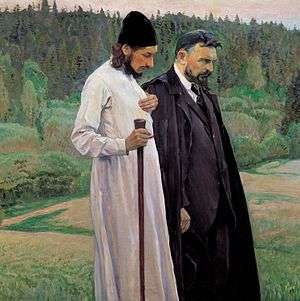 Russian philosophy includes a variety of philosophical movements. Authors who developed them are listed below sorted by movement.

While most authors listed below are primarily philosophers, also included here are some Russian fiction writers, like Tolstoy and Dostoyevsky, who are also known as philosophers.

Russian philosophy as a separate entity started its development in the 19th century, defined initially by the opposition of Westernizers, advocating Russia's following the Western political and economical models, and Slavophiles, insisting on developing Russia as a unique civilization. The latter group included Nikolai Danilevsky and Konstantin Leontiev, the early founders of eurasianism. The discussion of Russia's place in the world has since become the most characteristic feature of Russian philosophy.

In its further development, Russian philosophy was also marked by deep connection to literature and interest in creativity, society, politics and nationalism; cosmos and religion were other notable subjects.

From the early 1920s to late 1980s, Russian philosophy was dominated by Marxism presented as dogma and not grounds for discussion. Stalin's purges, culminating in 1937, delivered a deadly blow to the development of philosophy.

A handful of dissident philosophers survived through the Soviet period, among them Aleksei Losev. Stalin's death in 1953 gave way for new schools of thought to spring up, among them Moscow Logic Circle, and Tartu-Moscow Semiotic School. 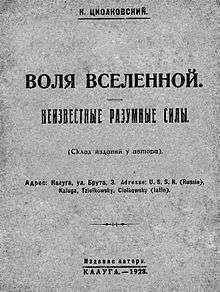 The cover of the book "The Will of the Universe. Intellect Unknown. Mind and Passions" by Konstantin Tsiolkovsky, 1928