Indian philosophy (Sanskrit: darśana) comprises the ancient philosophical traditions of the Indian subcontinent. The schools of Indian philosophical thought is classified as either orthodox or heterodox – āstika or nāstika – depending on one of three alternate criteria: whether it believes the Vedas are a valid source of knowledge; whether the school believes in the premises of Brahman and Atman; and whether the school believes in afterlife and Devas.[1][2][3]

There are six major schools of orthodox Hindu philosophy—Nyaya, Vaisheshika, Samkhya, Yoga, Mīmāṃsā and Vedanta, and four major heterodox schools—Jain, Buddhist, Ajivika and Cārvāka. However, there are other methods of classification; Vidyaranya for instance identifies sixteen schools of Indian philosophy by including those that belong to the Śaiva and Raseśvara traditions.[4][5]

The main schools of Indian philosophy were formalised chiefly between 1000 BCE to the early centuries of the Common Era. According to philosopher Sarvepalli Radhakrishnan, the earliest of these, which date back to the composition of the Upanishads in the later Vedic period (1000–500 BCE), constitute "the earliest philosophical compositions of the world."[6] Competition and integration between the various schools was intense during their formative years, especially between 800 BCE and 200 CE. Some schools like Jainism, Buddhism, Yoga, Śaiva and Advaita Vedanta survived, but others, like Charvaka and Ājīvika did not.

Indian philosophies share many concepts such as dharma, karma, samsara, reincarnation, dukkha, renunciation, meditation, with almost all of them focussing on the ultimate goal of liberation of the individual through diverse range of spiritual practices (moksha, nirvana).[10] They differ in their assumptions about the nature of existence as well as the specifics of the path to the ultimate liberation, resulting in numerous schools that disagreed with each other. Their ancient doctrines span the diverse range of philosophies found in other ancient cultures.[11]

Many Hindu intellectual traditions were classified during the medieval period of Brahmanic-Sanskritic scholasticism into a standard list of six orthodox (Astika) schools (darshanas), the "Six Philosophies" (ṣaḍ-darśana), all of which accept the testimony of the Vedas.[12][13][14]

These are often coupled into three groups for both historical and conceptual reasons: Nyaya-Vaishesika, Samkhya-Yoga, and Mimamsa-Vedanta. The Vedanta school is further divided into six sub-schools: Advaita (monism/nondualism), also includes the concept of Ajativada, Visishtadvaita (monism of the qualified whole), Dvaita (dualism), Dvaitadvaita (dualism-nondualism), Suddhadvaita, and Achintya Bheda Abheda schools.

Besides these schools Mādhava Vidyāraṇya also includes the following of the aforementioned theistic philosophies based on the Agamas and Tantras:[4]

The systems mentioned here are not the only orthodox systems, they are the chief ones, and there are other orthodox schools. These systems, accept the authority of Vedas and are regarded as orthodox (astika) schools of Hindu philosophy; besides these, schools that do not accept the authority of the Vedas are heterodox (nastika) systems such as Buddhism, Jainism, Ajivika and Cārvāka.[26][27][28] This orthodox-heterodox terminology is a construct of Western languages, and lacks scholarly roots in Sanskrit. According to Andrew Nicholson, there have been various heresiological translations of Āstika and Nāstika in 20th century literature on Indian philosophies, but quite many are unsophisticated and flawed.[3]

Several Śramaṇic movements have existed before the 6th century BCE, and these influenced both the āstika and nāstika traditions of Indian philosophy.[30] The Śramaṇa movement gave rise to diverse range of heterodox beliefs, ranging from accepting or denying the concept of soul, atomism, antinomian ethics, materialism, atheism, agnosticism, fatalism to free will, idealization of extreme asceticism to that of family life, strict ahimsa (non-violence) and vegetarianism to permissibility of violence and meat-eating.[31] Notable philosophies that arose from Śramaṇic movement are Jainism, Buddhism, Cārvāka and Ājīvika[32]

Jainism came into formal being after Mahavira synthesised philosophies and promulgations of the ancient Sramana philosophy, during the period around 550 BC, in the region that is present day Bihar in northern India.

Jainism, like Buddhism, is a Sramanic religion and rejected the authority of the Vedas. However, like all Indian religions, it shares the core concepts such as karma, ethical living, rebirth, samsara and moksha. Jainism places strong emphasis on asceticism and ahimsa (non-violence) as a means of spiritual liberation, ideas that influenced other Indian traditions.[33]

Buddhist philosophy is a system of thought which started with the teachings of Siddhartha Gautama, the Buddha, or "awakened one". Buddhism is founded on elements of the Śramaṇa movement, which flowered in the first half of the 1st millennium BCE, but its foundations contain novel ideas not found or accepted by other Sramana movements. Buddhism and Hinduism mutually influenced each other and shared many concepts, states Paul Williams, however it is now difficult to identify and describe these influences.[34] The influence of 3rd-century CE[35] Buddhist Tathagatagarbha Sutras on the Advaita Vedanta Hindu scholar Gaudapada – a major school of thought within Hinduism, is clear.[36] Buddhism rejected the Vedic concepts of Brahman (ultimate reality) and Atman (soul, self) at the foundation of Hindu philosophies.[37][38][39]

Buddhism shares many philosophical views with other Indian systems, such as belief in karma – a cause-and-effect relationship, samsara – ideas about cyclic afterlife and rebirth, dharma – ideas about ethics, duties and values, impermanence of all material things and of body, and possibility of spiritual liberation (nirvana or moksha).[40][41] A major departure from Hindu and Jain philosophy is the Buddhist rejection of an eternal soul (atman) in favour of anatta (non-Self).[42] 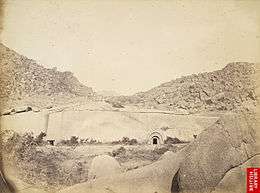 An aloof meditative life has been an ancient Indian tradition, and a source of the philosophical doctrines its schools developed. Above is the 3rd century BCE mendicant caves of the Ājīvikas (Barabar, near Gaya, Bihar).[43]

The Ajivika Indian philosophy is attributed to Makkhali Gosala, it was a śramaṇa movement and a major rival of early Buddhism and Jainism.[44] Ājīvikas were organised renunciates who formed discrete monastic communities prone to an ascetic and simple lifestyle.[45]

Original scriptures of the Ājīvika school of philosophy may once have existed, but these are currently unavailable and probably lost. Their theories are extracted from mentions of Ajivikas in the secondary sources of ancient Indian literature, particularly those of Jainism and Buddhism which polemically criticized the Ajivikas.[46] The Ājīvika school is known for its Niyati doctrine of absolute determinism (fate), the premise that there is no free will, that everything that has happened, is happening and will happen is entirely preordained and a function of cosmic principles.[46][47] Ājīvika considered the karma doctrine as a fallacy.[48] Ājīvikas were atheists[49] and rejected the authority of the Vedas, but they believed that in every living being is an ātman – a central premise of Hinduism and Jainism.[50][51]

Cārvāka or Lokāyata was a philosophy of scepticism and materialism, founded in the Mauryan period. They were extremely critical of other schools of philosophy of the time. Cārvāka deemed Vedas to be tainted by the three faults of untruth, self-contradiction, and tautology.[52] Likewise they faulted Buddhists and Jains, mocking the concept of liberation, reincarnation and accumulation of merit or demerit through karma.[53] They believed that, the viewpoint of relinquishing pleasure to avoid pain was the "reasoning of fools".[52]

The Indian traditions subscribed to diverse philosophies, significantly disagreeing with each other as well as orthodox Hinduism and its six schools of Hindu philosophy. The differences ranged from a belief that every individual has a soul (self, atman) to asserting that there is no soul,[54] from axiological merit in a frugal ascetic life to that of a hedonistic life, from a belief in rebirth to asserting that there is no rebirth.[55]

The Arthashastra, attributed to the Mauryan minister Chanakya, is one of the early Indian texts devoted to political philosophy. It is dated to 4th century BCE and discusses ideas of statecraft and economic policy.

The political philosophy most closely associated with India is the one of ahimsa (non-violence) and Satyagraha, popularised by Mahatma Gandhi during the Indian struggle for independence. It was influenced by the Indian Dharmic philosophy, particularly the Buddha, Bhagvata Gita, as well as secular writings of authors such as Leo Tolstoy, Henry David Thoreau and John Ruskin.[100] In turn it influenced the later movements for independence and civil rights, especially those led by Martin Luther King, Jr. and to a lesser extent Nelson Mandela.[101]

In appreciation of complexity of the Indian philosophy, T S Eliot wrote that the great philosophers of India "make most of the great European philosophers look like schoolboys".[102][103] Arthur Schopenhauer used Indian philosophy to improve upon Kantian thought. In the preface to his book The World As Will And Representation, Schopenhauer writes that one who "has also received and assimilated the sacred primitive Indian wisdom, then he is the best of all prepared to hear what I have to say to him"[104] The 19th century American philosophical movement Transcendentalism was also influenced by Indian thought[105][106]