The Primera Junta or First Assembly is the most common name given to the first independent government of Argentina. It was created on 25 May 1810, as a result of the events of the May Revolution. The Junta initially had representatives from only Buenos Aires. When it was expanded, as expected, with the addition of the representatives from the other cities of the Viceroyalty of the Río de la Plata, it became popularly known instead as the Junta Grande (Grand Council). The Junta operated at El Fuerte (the fort, where the modern Casa Rosada stands), which had been used since 1776 as a residence by the Viceroys.

This Junta—officially named the Junta Provisional Gubernativa de las Provincias del Río de la Plata a nombre del Señor Don Fernando VII (Provisional Governing Junta of the Provinces of Río de la Plata in the Name of Señor Don Ferdinand VII)—allegedly meant to govern in the name of the King of Spain, while he was imprisoned by Napoleon Bonaparte. Juntas were a form of transitional or emergency government, which attempted to maintain Spanish sovereignty, that emerged during the Napoleonic invasion in Spanish cities that had not succumbed to the French. The most important for Spanish America was the Junta of Seville, which claimed sovereignty over the overseas possessions, given the fact that the province of Seville historically had enjoyed exclusive rights to the American trade. Its claims had been rejected by Spanish Americans, and its authority was quickly superseded by a Supreme Central Junta of Spain, which included American representation. 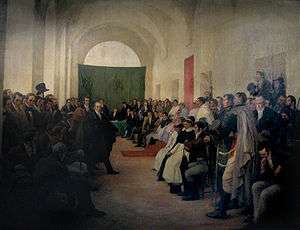 The Open cabildo of 22 May decided to replace the viceroy with a Junta.

When the Supreme Central Junta abolished itself in 1810, the politically active inhabitants of Buenos Aires saw no better moment than this to establish a local government.[1] They had been influenced by the recent democratic and republican philosophical wave, and were also concerned about the commercial monopoly exerted by the Spanish crown, which was suffocating the local economy. Historically Buenos Aires province had partially mitigated this problem through contraband. Local politicians, such as former council member and legal advisor to the viceroy, Juan José Castelli, who wanted a change towards self-government and free commerce, cited traditional Spanish political theory and argued that the King being imprisoned, sovereignty had returned to the people.[2] The people were to assume the government until the King returned, just as the subjects in Spain had done two years earlier with the establishment of juntas. The Viceroy and his supporters countered that the colonies belonged to Spain and did not have a political relationship with only the King. Therefore, they should follow any governmental body established in Spain as the legal authority, namely the Supreme Central Junta of Spain and its successor, the Council of Regency.

The meeting of a Buenos Aires cabildo abierto (an extraordinary meeting of the municipal council with assistance of over 200 notables from government, the church, guilds and other corporations) during 22 May 1810, came under strong pressure from the militias and a crowd that formed in front of the cabildo hall on the Plaza Mayor (today the Plaza de Mayo), up to 25 May. The crowd favored the stance of the local politicians, and the cabildo ended up creating the Primera Junta, the first form of local government in the territory that would later become Argentina. Spain would never recover its dominion over that territory. From the very beginning of the new government, two factions manifested their differences, a more radical one, whose visible leader was the Junta's Secretary, Mariano Moreno, and the conservative wing that supported the Junta's President, Cornelio Saavedra.

In general the principles of the May Revolution were popular sovereignty, the principle of representation and federalization, division of powers, the maintenance of the mandates, and publication of the government's actions 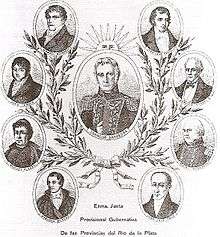 Lithograph of the members of the Primera Junta. 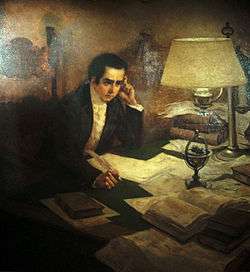 Mariano Moreno, Secretary of War, was one of the most important members of the Primera Junta.

Despite the replacement of Cisneros, the Royal Audience and the Cabildo stood with the authorities that existed before the revolution, who opposed the Junta since its first day. The Audience refused at first to swear allegiance to the Junta, and when they finally did, prosecutor Caspe did so with clear gestures of contempt. Caspe would be later ambushed near his home, in retaliation for this.[3] The Cabildo imposed a time limit on the Junta: if the General Congress was not formed in six months, the Cabildo would reassume government. The Junta answered the same day, rejecting such requirements. The Audience then requested that the Junta submitted to the Regency Counsel, but the Junta refused, on the grounds that Cisneros did not so submit and the Audience did not request him to. The Audience itself swore allegiance to the Counsel shortly after, and they were all banished in response. Together with the ex-viceroy Cisneros, they were forced to take the ship Dart that left them at the Canary Islands; the exceptions were Márquez del Plata, who was at the Banda Oriental at the time, and the octogenarian Lucas Muñoz Cubero.[4]

From the early days of the Primera Junta there was a strong rivalry between Saavedra and Moreno. According to Ignacio Núñez, the Morenists accused Saavedra of plotting to restore the tyranny of the viceroys in his office, while the Saavedrists accused Moreno of usurping government roles that were not intended for him.[5] Matheu would also point in his memories that the Morenists were upset because they perceived that Saavedra enjoyed receiving honors and distinctions that they had chosen to avoid.[5]

The Junta was received with mixed reactions from the other cities of the viceroyalty. Santa Fe, Entre Ríos, Misiones, Corrientes and Mendoza supported the change, others did not. Upper Peru, which greatly benefited from the system of mita to exploit the mines in Potosi, supported the absolutist system for a long time. Javier De Elío in Montevideo denied recognition to the Junta. Paraguay was torn between supporters of either side, but royalists prevailed. However, the most immediate danger to the Junta came from Cordoba, where Santiago de Liniers came out of his retirement and started to organize an army to lead a counter-revolution against Buenos Aires. The Junta ordered Ortiz de Ocampo to stand against those counter-revolutionaries and bring the leaders as prisoners to Buenos Aires. A later ruling requested instead to execute them, but after defeating Liniers, Ortiz de Ocampo decided to ignore the latter and instead to follow the first ruling. The Junta removed Ocampo from his duty for this act of disobedience, and replaced him with Juan José Castelli. Castelli ordered the execution of the counter-revolutionaries by August, 26, with the exception of the priest Orellana. By this time, Mariano Moreno was popularly regarded as the leader of the revolution, whose resolution permitted the radical changes to the absolutist system that the Junta had managed so far.[6]

There's some controversy among historians about the authenticity of the Operations plan, a secret document attributed to Mariano Moreno, that set a harsh government policy in the fields of economics, politics and international relations.

Military authorities, fearing the loss of power by Saavedra, pressured the Junta to control Moreno. Moreno, on the other hand, succeeded in getting the approval of decrees that limited Saavedra and others. By December 1810 tension had reached its peak. Saavedra got the support of deputies sent by the interior provinces that had not yet been allowed to join the Junta. With this backing, Saavedra gave Moreno his most serious political setback: he forced Moreno to present his resignation on 18 December. With this resignation, the integration of the deputies from the other provinces to the Junta became possible.

Created on 25 May 1810, the Primera Junta was thus transformed on 18 December of the same year into the new Junta Grande by the introduction of representatives from other provinces of Río de la Plata.

The Primera Junta was concerned with the risk of Portuguese expansionism towards La Plata, either directly or through the Carlotist project. The diplomacy in Spain attempted to prevent the dispatch of a punitive army, limiting the armed conflicts to the royalists in Paraguay, the Upper Peru and the Banda Oriental. The Junta declared itself a natural ally of any city that revolts against the royalists; either those that did so in support of the May Revolution or those who revolted on their own (Chile, and Paraguay shortly after Belgrano's defeat).[7]

Britain, allied with Spain in the Napoleonic Wars, stayed neutral in the conflicts between patriots and royalists. Nevertheless, the British policy towards the conflict was to favour British trade as long as it did not conflict with the neutral policy.[7]