In mathematics and theoretical physics, the term quantum group denotes various kinds of noncommutative algebras with additional structure. In general, a quantum group is some kind of Hopf algebra. There is no single, all-encompassing definition, but instead a family of broadly similar objects.

The term "quantum group" first appeared in the theory of quantum integrable systems, which was then formalized by Vladimir Drinfeld and Michio Jimbo as a particular class of Hopf algebra. The same term is also used for other Hopf algebras that deform or are close to classical Lie groups or Lie algebras, such as a `bicrossproduct' class of quantum groups introduced by Shahn Majid a little after the work of Drinfeld and Jimbo.

In Drinfeld's approach, quantum groups arise as Hopf algebras depending on an auxiliary parameter q or h, which become universal enveloping algebras of a certain Lie algebra, frequently semisimple or affine, when q = 1 or h = 0. Closely related are certain dual objects, also Hopf algebras and also called quantum groups, deforming the algebra of functions on the corresponding semisimple algebraic group or a compact Lie group.

Just as groups often appear as symmetries, quantum groups act on many other mathematical objects and it has become fashionable to introduce the adjective quantum in such cases; for example there are quantum planes and quantum Grassmannians.

The discovery of quantum groups was quite unexpected, since it was known for a long time that compact groups and semisimple Lie algebras are "rigid" objects, in other words, they cannot be "deformed". One of the ideas behind quantum groups is that if we consider a structure that is in a sense equivalent but larger, namely a group algebra or a universal enveloping algebra, then a group or enveloping algebra can be "deformed", although the deformation will no longer remain a group or enveloping algebra. More precisely, deformation can be accomplished within the category of Hopf algebras that are not required to be either commutative or cocommutative. One can think of the deformed object as an algebra of functions on a "noncommutative space", in the spirit of the noncommutative geometry of Alain Connes. This intuition, however, came after particular classes of quantum groups had already proved their usefulness in the study of the quantum Yang-Baxter equation and quantum inverse scattering method developed by the Leningrad School (Ludwig Faddeev, Leon Takhtajan, Evgenii Sklyanin, Nicolai Reshetikhin and Vladimir Korepin) and related work by the Japanese School.[1] The intuition behind the second, bicrossproduct, class of quantum groups was different and came from the search for self-dual objects as an approach to quantum gravity.[2]

One type of objects commonly called a "quantum group" appeared in the work of Vladimir Drinfeld and Michio Jimbo as a deformation of the universal enveloping algebra of a semisimple Lie algebra or, more generally, a Kac–Moody algebra, in the category of Hopf algebras. The resulting algebra has additional structure, making it into a quasitriangular Hopf algebra.

Let A = (aij) be the Cartan matrix of the Kac–Moody algebra, and let q be a nonzero complex number distinct from 1, then the quantum group, Uq(G), where G is the Lie algebra whose Cartan matrix is A, is defined as the unital associative algebra with generators kλ (where λ is an element of the weight lattice, i.e. 2(λ, αi)/(αi, αi) is an integer for all i), and ei and fi (for simple roots, αi), subject to the following relations:

for all positive integers n, and

In the limit as q → 1, these relations approach the relations for the universal enveloping algebra U(G), where kλ → 1 and

There are various coassociative coproducts under which these algebras are Hopf algebras, for example,

In addition, any Hopf algebra leads to another with reversed coproduct T o Δ, where T is given by T(x ⊗ y) = y ⊗ x, giving three more possible versions.

The counit on Uq(A) is the same for all these coproducts: ε(kλ) = 1, ε(ei) = ε(fi) = 0, and the respective antipodes for the above coproducts are given by

Alternatively, the quantum group Uq(G) can be regarded as an algebra over the field C(q), the field of all rational functions of an indeterminate q over C.

Similarly, the quantum group Uq(G) can be regarded as an algebra over the field Q(q), the field of all rational functions of an indeterminate q over Q (see below in the section on quantum groups at q = 0). The center of quantum group can be described by quantum determinant.

As is the case for all Hopf algebras, Uq(G) has an adjoint representation on itself as a module, with the action being given by

A weight module is called integrable if the actions of ei and fi are locally nilpotent (i.e. for any vector v in the module, there exists a positive integer k, possibly dependent on v, such that

for all i). In the case of integrable modules, the complex numbers dλ associated with a weight vector satisfy

, where 'ν is an element of the weight lattice, and cλ are complex numbers such that

Define a vector v to have weight ν if

for all λ in the weight lattice.

and ν is dominant and integral.

As is the case for all Hopf algebras, the tensor product of two modules is another module. For an element x of Uq(G), and for vectors v and w in the respective modules, x ⋅ (v ⊗ w) = Δ(x) ⋅ (v ⊗ w), so that

, and in the case of coproduct Δ1,

for all weights λ, and

In the specific case where G is a finite-dimensional Lie algebra (as a special case of a Kac–Moody algebra), then the irreducible representations with dominant integral highest weights are also finite-dimensional.

and an infinite formal sum, where λj is a basis for the dual space to the Cartan subalgebra, and μj is the dual basis, and η = ±1.

Specifically, if V is a highest weight module, then the formal infinite sum, R, has a well-defined, and invertible, action on V ⊗ V, and this value of R (as an element of End(V ⊗ V)) satisfies the Yang-Baxter equation, and therefore allows us to determine a representation of the braid group, and to define quasi-invariants for knots, links and braids.

Masaki Kashiwara has researched the limiting behaviour of quantum groups as q → 0, and found a particularly well behaved base called a crystal base.

Description and classification by root-systems and Dynkin diagrams

There has been considerable progress in describing finite quotients of quantum groups such as the above Uq(g) for qn =1; one usually considers the class of pointed Hopf algebras, meaning that all subcoideals are 1-dimensional and thus there sum form a group called coradical:

Here, as in the classical theory V is a braided vector space of dimension n spanned by the E´s, and σ (a so-called cocylce twist) creates the nontrivial linking between E´s and F´s. Note that in contrast to classical theory, more than two linked components may appear. The role of the quantum Borel algebra is taken by a Nichols algebra 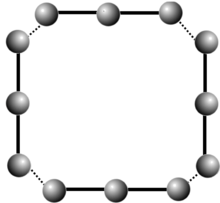 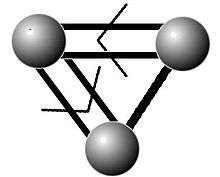 is an n-dimensional representation of G, then for all i, j uij ∈ C(G) and

It follows that the *-algebra generated by uij for all i, j and κ(uij) for all i, j is a Hopf *-algebra: the counit is determined by ε(uij) = δij for all i, j (where δij is the Kronecker delta), the antipode is κ, and the unit is given by

As a generalization, a compact matrix quantum group is defined as a pair (C, fu), where C is a C*-algebra and

is a matrix with entries in C such that

As a consequence of continuity, the comultiplication on C is coassociative.

In general, C is not a bialgebra, and C0 is a Hopf *-algebra.

Whereas compact matrix pseudogroups are typically versions of Drinfeld-Jimbo quantum groups in a dual function algebra formulation, with additional structure, the bicrossproduct ones are a distinct second family of quantum groups of increasing importance as deformations of solvable rather than semisimple Lie groups. They are associated to Lie splittings of Lie algebras or local factorisations of Lie groups and can be viewed as the cross product or Mackey quantisation of one of the factors acting on the other for the algebra and a similar story for the coproduct Δ with the second factor acting back on the first. The very simplest nontrivial example corresponds to two copies of R locally acting on each other and results in a quantum group (given here in an algebraic form) with generators p, K, K−1, say, and coproduct

where h is the deformation parameter. This quantum group was linked to a toy model of Planck scale physics implementing Born reciprocity when viewed as a deformation of the Heisenberg algebra of quantum mechanics. Also, starting with any compact real form of a semisimple Lie algebra g its complexification as a real Lie algebra of twice the dimension splits into g and a certain solvable Lie algebra (the Iwasawa decomposition), and this provides a canonical bicrossproduct quantum group associated to g. For su(2) one obtains a quantum group deformation of the Euclidean group E(3) of motions in 3 dimensions.