Remote Authentication Dial-In User Service (RADIUS) is a networking protocol that provides centralized Authentication, Authorization, and Accounting (AAA or Triple A) management for users who connect and use a network service. RADIUS was developed by Livingston Enterprises, Inc. in 1991 as an access server authentication and accounting protocol and later brought into the Internet Engineering Task Force (IETF) standards.[1]

Because of the broad support and the ubiquitous nature of the RADIUS protocol, it is often used by ISPs and enterprises to manage access to the Internet or internal networks, wireless networks, and integrated e-mail services. These networks may incorporate modems, DSL, access points, VPNs, network ports, web servers, etc.[2]

RADIUS is a client/server protocol that runs in the application layer, and can use either TCP or UDP as transport. Network access servers, the gateways that control access to a network, usually contain a RADIUS client component that communicates with the RADIUS server.[3] RADIUS is often the back-end of choice for 802.1X authentication as well.[4]

The RADIUS server is usually a background process running on a UNIX or Microsoft Windows server.[3]

The user or machine sends a request to a Network Access Server (NAS) to gain access to a particular network resource using access credentials. The credentials are passed to the NAS device via the link-layer protocol - for example, Point-to-Point Protocol (PPP) in the case of many dialup or DSL providers or posted in an HTTPS secure web form.

In turn, the NAS sends a RADIUS Access Request message to the RADIUS server, requesting authorization to grant access via the RADIUS protocol.[5]

This request includes access credentials, typically in the form of username and password or security certificate provided by the user. Additionally, the request may contain other information which the NAS knows about the user, such as its network address or phone number, and information regarding the user's physical point of attachment to the NAS.

The RADIUS server checks that the information is correct using authentication schemes such as PAP, CHAP or EAP. The user's proof of identification is verified, along with, optionally, other information related to the request, such as the user's network address or phone number, account status, and specific network service access privileges. Historically, RADIUS servers checked the user's information against a locally stored flat file database. Modern RADIUS servers can do this, or can refer to external sources — commonly SQL, Kerberos, LDAP, or Active Directory servers — to verify the user's credentials.

Each of these three RADIUS responses may include a Reply-Message attribute which may give a reason for the rejection, the prompt for the challenge, or a welcome message for the accept. The text in the attribute can be passed on to the user in a return web page.

When a client is configured to use RADIUS, any user of the client presents authentication information to the client. This might be with a customizable login prompt, where the user is expected to enter their username and password. Alternatively, the user might use a link framing protocol such as the Point-to-Point Protocol (PPP), which has authentication packets which carry this information.

Once the client has obtained such information, it may choose to authenticate using RADIUS. To do so, the client creates an "Access- Request" containing such Attributes as the user's name, the user's password, the ID of the client and the Port ID which the user is accessing. When a password is present, it is hidden using a method based on the RSA Message Digest Algorithm MD5. 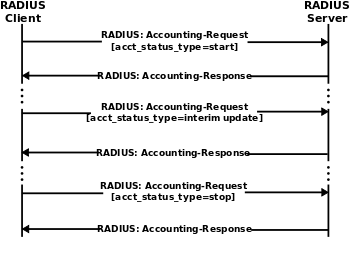 Accounting is described in RFC 2866.

When network access is granted to the user by the NAS, an Accounting Start (a RADIUS Accounting Request packet containing an Acct-Status-Type attribute with the value "start") is sent by the NAS to the RADIUS server to signal the start of the user's network access. "Start" records typically contain the user's identification, network address, point of attachment and a unique session identifier.[6]

Periodically, Interim Update records (a RADIUS Accounting Request packet containing an Acct-Status-Type attribute with the value "interim-update") may be sent by the NAS to the RADIUS server, to update it on the status of an active session. "Interim" records typically convey the current session duration and information on current data usage.

Finally, when the user's network access is closed, the NAS issues a final Accounting Stop record (a RADIUS Accounting Request packet containing an Acct-Status-Type attribute with the value "stop") to the RADIUS server, providing information on the final usage in terms of time, packets transferred, data transferred, reason for disconnect and other information related to the user's network access.

Typically, the client sends Accounting-Request packets until it receives an Accounting-Response acknowledgement, using some retry interval.

The primary purpose of this data is that the user can be billed accordingly; the data is also commonly used for statistical purposes and for general network monitoring.

RADIUS is commonly used to facilitate roaming between ISPs, for example:

RADIUS facilitates this by the use of realms, which identify where the RADIUS server should forward the AAA requests for processing.

A realm is commonly appended to a user's user name and delimited with an '@' sign, resembling an email address domain name. This is known as postfix notation for the realm. Another common usage is prefix notation, which involves prepending the realm to the username and using '\' as a delimiter. Modern RADIUS servers allow any character to be used as a realm delimiter, although in practice '@' and '\' are usually used.

Realms can also be compounded using both prefix and postfix notation, to allow for complicated roaming scenarios; for example, somedomain.com\username@anotherdomain.com could be a valid username with two realms.

Although realms often resemble domains, it is important to note that realms are in fact arbitrary text and need not contain real domain names. Realm formats are standardized in RFC 4282, which defines a Network Access Identifier (NAI) in the form of 'user@realm'. In that specification, the 'realm' portion is required to be a domain name. However, this practice is not always followed. RFC 7542 [7] replaced RFC 4282 in May 2015.

When a RADIUS server receives an AAA request for a user name containing a realm, the server will reference a table of configured realms. If the realm is known, the server will then proxy the request to the configured home server for that domain. The behavior of the proxying server regarding the removal of the realm from the request ("stripping") is configuration-dependent on most servers. In addition, the proxying server can be configured to add, remove or rewrite AAA requests when they are proxied over time again.

Proxy Chaining is possible in RADIUS and authentication/authorization and accounting packets are usually routed between a NAS Device and a Home server through a series of proxies. Some of advantages of using Proxy chains include scalability improvements, policy implementations and capability adjustments. But in roaming scenarios, the NAS, Proxies and Home Server could be typically managed by different administrative entities. Hence, the trust factor among the proxies gains more significance under such Inter-domain applications. Further, the absence of end to end security in RADIUS adds to the criticality of trust among the Proxies involved. Proxy Chains are explained in RFC 2607.

Roaming with RADIUS exposes the users to various security and privacy concerns. More generally, some roaming partners establish a secure tunnel between the RADIUS servers to ensure that users' credentials cannot be intercepted while being proxied across the internet. This is a concern as the MD5 hash built into RADIUS is considered insecure.[8] 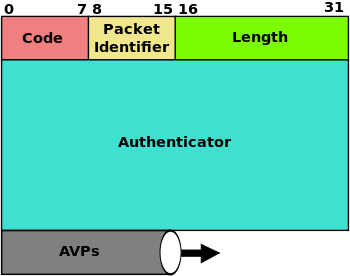 The RADIUS packet data format is shown to the right. The fields are transmitted from left to right, starting with the code, the identifier, the length, the authenticator and the attributes.

The Identifier field aids in matching requests and replies.

The Length field indicates the length of the entire RADIUS packet including the Code, Identifier, Length, Authenticator and optional Attribute fields.

The Authenticator is used to authenticate the reply from the RADIUS server, and is used in encrypting passwords; its length is 16 bytes.

The RADIUS Attribute Value Pairs (AVP) carry data in both the request and the response for the authentication, authorization, and accounting transactions. The length of the radius packet is used to determine the end of the AVPs.

RADIUS is extensible; many vendors of RADIUS hardware and software implement their own variants using Vendor-Specific Attributes (VSAs). Microsoft has published some of their VSAs.[9] VSA definitions from many other companies remain proprietary and/or ad-hoc, nonetheless many VSA dictionaries can be found by downloading the source code of open source RADIUS implementations, for example FreeRADIUS or openRADIUS.

The RADIUS protocol transmits obfuscated passwords using a shared secret and the MD5 hashing algorithm. As this particular implementation provides only weak protection of the user's credentials,[10] additional protection, such as IPsec tunnels or physically secured data-center networks, should be used to further protect the RADIUS traffic between the NAS device and the RADIUS server. Additionally, the user's security credentials are the only part protected by RADIUS itself, yet other user-specific attributes such as tunnel-group IDs or vlan memberships passed over RADIUS may be considered sensitive (helpful to an attacker) or private (sufficient to identify the individual client) information as well. The RadSec protocol claims to solve aforementioned security issues.

RADIUS was originally specified in an RFI by Merit Network in 1991 to control dial-in access to NSFnet. Livingston Enterprises responded to the RFI with a description of a RADIUS server. Merit Network awarded the contract to Livingston Enterprises that delivered their PortMaster series of Network Access Servers and the initial RADIUS server to Merit. RADIUS was later (1997) published as RFC 2058 and RFC 2059 (current versions are RFC 2865 and RFC 2866).[1]

Now, several commercial and open-source RADIUS servers exist. Features can vary, but most can look up the users in text files, LDAP servers, various databases, etc. Accounting records can be written to text files, various databases, forwarded to external servers, etc. SNMP is often used for remote monitoring and keep-alive checking of a RADIUS server. RADIUS proxy servers are used for centralized administration and can rewrite RADIUS packets on the fly (for security reasons, or to convert between vendor dialects).

The Diameter protocol was intended as the replacement for RADIUS. While both are Authentication, Authorization, and Accounting (AAA) protocols, the use-cases for the two protocols have since diverged. Diameter is largely used in the 3G space. RADIUS is used elsewhere. One of the largest barriers to having Diameter replace RADIUS is that switches and Access Points typically implement RADIUS, but not Diameter.

The RADIUS protocol is currently defined in the following IETF RFC documents.