This article is about the city of Kampala. For Old Kampala, see Kampala Hill.

Kampala is the capital and largest city of Uganda. The city is divided into five boroughs that oversee local planning: Kampala Central Division, Kawempe Division, Makindye Division, Nakawa Division, and Lubaga Division. The city is coterminous with Kampala District. Surrounding Kampala is the rapidly growing Wakiso District, whose population more than doubled between 2002 and 2014 and now stands at over 2 million.[1]

Kampala was named the 13th fastest growing city on the planet, with an annual population growth rate of 4.03%[2] by City Mayors. Kampala was ranked the best city to live in East Africa[3] ahead of Nairobi and Kigali by Mercer, a global development consulting agency based in New York City, U.S.

In December 2015, Google launched its first wi-fi network in Kampala.[4]

Before the arrival of the British colonists, the Kabaka of Buganda had chosen the zone that would become Kampala as a hunting reserve. The area, composed of rolling hills with grassy wetlands in the valleys, was home to several species of antelope, particularly impala. When the British arrived, they called it "Hills of the Impala". The language of the Buganda, Luganda, adopted many English words because of their interactions with the British. The Buganda translated "Hill of the Impala" as Akasozi ke'Empala - "Kasozi" meaning "hill", "ke" meaning "of", and "empala" the plural of "impala". In Luganda, the words "ka'mpala" mean "that is of the impala", in reference to a hill, and the single word "Kampala" was adopted as the name for the city that grew out of the Kabaka's hills.[5]

The city grew as the capital of the Buganda kingdom, from which several buildings survive, including the Kasubi Tombs (built in 1881), the Lubiri Palace, the Buganda Parliament and the Buganda Court of Justice. In 1890, British colonial administrator Frederick Lugard constructed a forum along Mengo Hill within the city, which allowed for the British to occupy much of the territory controlled by the Buganda, including Kampala.[6] In 1894, the British government officially established a protectorate within this territory, and in 1896, the protectorate expanded to cover the Ankole, Toro Kingdom, and Bunyoro kingdoms as well.[7] In 1905, the British government formally declared the entire territory to be a British colony.[8] From that time until the independence of the country in 1962, the capital was relocated to Entebbe, although the city continued to be the primary economic and manufacturing location for Uganda.[9] In 1922, the Makerere Technical Institute, now known as Makerere University, started as the first collegiate institution both within Kampala, and within the British colonies on the east coast of Africa.[10] Following the 1962 independence, Milton Obote became president of Uganda, and held the position until 1971, when former sergeant Idi Amin defeated his government in a military coup.[11] He proceeded to expel all Asian residents living within Kampala, and attacked the Jewish population living within the city.[12] In 1978, he invaded the neighboring country of Tanzania, and in turn, the government there started the Uganda–Tanzania War, which created severe damage to the buildings of Kampala.[13] Since then, the city has since then been rebuilt with constructions of new construction of hotels, banks, shopping malls, educational institutions, and hospitals and the improvement of war torn buildings and infrastructure. Traditionally, Kampala was a city of seven hills, but over time it has come to have a lot more.[14] 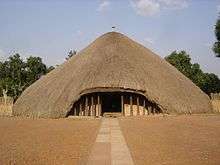 The main campus of Makerere University is in the Makerere Hill area of the city.

Kampala also hosts the headquarters of the East African Development Bank on Nakasero Hill and the Uganda Local Governments Association on Entebbe Road.

Kampala was originally built on seven hills, but as its size has increased, it has expanded to more hills than seven. The original seven hills are: 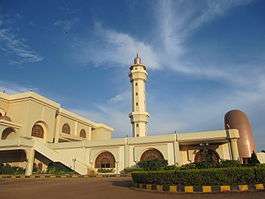 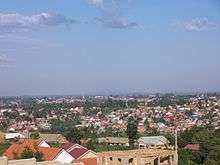 A view of suburban Kampala

There are also Tank Hill and Mulago Hill. The city is expanding rapidly to include Makindye Hill and Konge Hill.

Other features of the city include the Uganda Museum, the Ugandan National Theatre, Nakasero Market, and St. Balikuddembe Market (formerly Owino Market). Kampala is also known for its nightlife,[16] which includes several casinos, notably Casino Simba in the Garden City shopping centre, Kampala Casino, and Mayfair Casino. Port Bell on the shores of Lake Victoria is 10 kilometres (6.2 mi) away.

Kampala hosts a Bahá'í House of Worship known as the Mother Temple of Africa and is situated on Kikaya Hill on the outskirts of the city. The temple was inaugurated in January 1961.[17]

The Ahmadiyya Central Mosque in Kampala is the central mosque of the Ahmadiyya Muslim Community, which has six minarets and can hold up to 9,000 worshippers.[18] 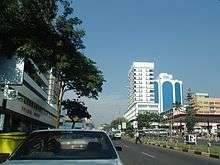 Kampala is served by Entebbe International Airport, which is the largest airport in Uganda.

Boda-bodas (local motorbike transport) are a popular mode of transport that gives access to many areas within and outside the city. Standard fees for these range from USh:1,000 to 2,000 or more. Boda-bodas are useful for passing through rush-hour traffic, although many are poorly maintained and dangerous.[20]

In early 2007, it was announced that Kampala would remove commuter taxis from its streets and replace them with a comprehensive city bus service. (In Kampala, the term "taxi" refers to a 15-seater minibus used as public transport.) The bus service was expected to cover the greater Kampala metropolitan area including Mukono, Mpigi, Bombo, Entebbe, Wakiso and Gayaza. As of December 2011 the service had not yet started.[21] Having successfully completed the Northern Bypass, the government, in collaboration with its stakeholders, now plans to introduce the Bus Rapid Transit (BRT) system in Kampala by 2014. On 12 March 2012, Pioneer Easy Bus Company, a private transport company, started public bus service in Kampala with an estimated 100 buses each with a 60-passenger capacity (30 seated and 30 standing), acquired from China. Another 422 buses were expected in the country in 2012 to complement the current fleet. The buses operate 24 hours daily. The company has a concession to provide public transport in the city for the next five years.[22][23] The buses were impounded for back taxes in December 2013. The company expected to resume operation in February 2015.[24]

In 2014, Uganda's President Yoweri Museveni and a China transportation company signed a Memorandum of Understanding, that they would at some point begin embarking on building a light rail system in Kampala, similar to the one recently completed in Addis Ababa, Ethiopia.

On 11 April 2011, the pressure group Activists for Change (A4C) held its first Walk to Work protest near Kampala, in response to a comment by President Museveni on the increased cost of fuel, which had risen by 50 percent between January and April 2011. He said: "What I call on the public to do is to use fuel sparingly. Don't drive to bars."[25][26] The protest, which called on workers to walk to work to highlight the increased cost of transport in Uganda,[25] was disrupted by police, who fired tear gas and arrested three-time presidential candidate Kizza Besigye and Democratic Party leader Norbert Mao.[27] In the course of the protest, Besigye was shot in the right arm by a rubber bullet. The government blamed the violence on protesters.[26]

Kampala has a tropical rainforest climate (Af) under the Köppen-Geiger climate classification system.[28]

Another facet of Kampala’s weather is that it features two annual wet seasons. There is a long rainy season from August to December and a short rainy season from February to June. However, the shorter rainy season sees substantially heavier rainfall per month, with April typically seeing the heaviest amount of precipitation at an average of around 169 millimetres (6.7 in) of rain. Kampala has been frequently mentioned as one of the most thunderous places on Earth. 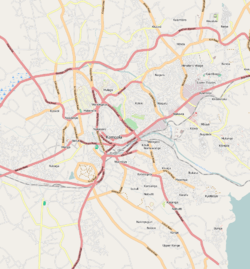 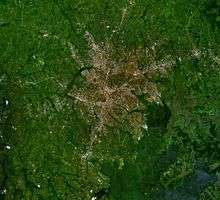 View of Kampala from space
See also: Demographics of Uganda

Kampala has a diverse ethnic population. The city's ethnic makeup has been defined by political and economic factors. A large number of western Ugandans, particularly the Banyankole, moved to the capital in the new government of Yoweri Museveni.[32]

Inter-tribal marriage in Uganda is still uncommon outside large urban centers. Although many Kampala residents have been born and brought up in the city, they still define themselves by their tribal roots and speak their ancestral languages. This is more evident in the suburbs, where tribal languages are spoken widely alongside English, Swahili, and Luganda. In addition to the Baganda and Banyankole, other large ethnic groups include the Basoga, Bafumbira, Batoro, Bakiga, Alur, Bagisu, Banyoro, Iteso, Langi, and Acholi.[33]

Efforts are underway to relocate heavy industry to the Kampala Business and Industrial Park, located in Namanve, Mukono District, approximately 14 kilometres (8.7 mi) east of the city's central business district,[34] thereby cutting down on city traffic congestion. Some of the businesses that maintain their headquarters in the city center include all of the 25 commercial banks licensed in Uganda; the New Vision Group, the leading news media conglomerate and majority owned by the government; and the Daily Monitor publication, a member of the Kenya-based Nation Media Group. Air Uganda maintained its headquarters in an office complex on Kololo Hill in Kampala.[35] Crown Beverages Limited, the sole Pepsi-Cola franchise bottler in the country, is situated in Nakawa, a division of Kampala, about 5 kilometres (3 mi), east of the city centre.[36]

The informal sector is a large contributor to Kampala’s GDP. Citizens who work in the formal sector also participate in informal activities to earn more income for their families. A public servant in Kampala, for example, may engage in aviculture in addition to working in the formal sector. Other informal fields include owning taxies and urban agriculture. The use of Kampala’s wetlands for urban farming has increased over the past few decades. It connects the informal rural settlements with the more industrialized parts of the city. The produce grown in the wetlands is sold in markets in the urban areas.[37]