López Murphy was born in Adrogué, Buenos Aires Province. He attended the National University of La Plata, where he was awarded the title of "Licenciado en Economía" (a degree in Economics comprising four years of study) in 1975. He then obtained a Master's degree in Economics from the University of Chicago in 1980. His professional career included being a university professor, a consultant and advisor to companies, international investors and financial institutions in Argentina and Latin America, such as the IMF, the World Bank, the CEPAL, and the IADB. He also was Chief Economist at the FIEL economic think-tank in Argentina.[1] 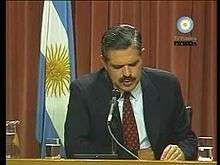 In 1999, he entered politics when he was appointed Minister of Defense as a member of the Radical Civic Union (UCR). He remained in this position until 2001 when he briefly took the position of Minister of Economy in the government of Argentina.[2] Enjoying little political support from President, Fernando de la Rúa, he was fired within two weeks after a wave of protest over his proposed fiscal austerity project, by which he sought to prevent the 2001 economic crisis but which sharply cut education spending.[3]

He founded a conservative political party, Recreate for Growth (RECREAR), in 2002, and ran for the presidency in the April 2003 elections, finishing third behind Carlos Menem and Néstor Kirchner, with 16.3% of the popular vote. He later teamed with Mauricio Macri in 2005 to create a new center-right coalition called Republican Proposal (PRO), which tacitly supported his unsuccessful second bid to the presidency in the 2007 presidential election. López Murphy did poorly, gaining just 1% of the vote; PRO, however, did somewhat better in provincial and congressional elections, and won the mayoral election in Buenos Aires that year. He left RECREAR in April 2008, citing differences over party list strategy,[4] and in December established Convergencia Federal ("Federal Convergence"). He ran for Mayor of Buenos Aires in 2011 on this ticket, but obtained only 1.4% of the vote.[5]

He is married with three children. López Murphy is often referred to in the media as "the Bulldog," a nickname he has come to embrace himself.[6][7]