Ministry of Economy and Public Finances was the historical name of the current Ministry of Treasury and Public Finances. It is concerned with finance and monetary matters, and its position within the Government of Argentina is analogous to the finance ministers of some countries (e.g. the United States Treasury Secretary). The Minister is a member of the President's Cabinet, a post currently held by Alfonso Prat-Gay. 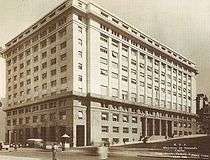 The Economy Ministry in 1940

The Argentine Ministry of the Economy has, since the building's 1939 inaugural, been based in a 14-story Rationalist office building designed by local architect Carlos Pibernat. The Economy Ministry building was built on a 0.57 ha (1.4 ac) Montserrat neighborhood lot facing the Casa Rosada presidential office building to the north, and the Defense Ministry (Libertador Building) to the east – a government building also designed by Pibernat.

The building's lobby was decorated with murals painted by the architect's brother, Antonio Pibernat, a post-impressionist painter influenced by the naturalist Barbizon School.[2]

The post has existed on a formal basis since the 1826 inaugural of Bernardino Rivadavia, who named lawmaker Salvador María del Carril as the nation's first official Ministro de Hacienda.[3] The office became among the most powerful in Argentine Government during the generation after 1880, when English Argentine investment, foreign trade, and immigration spurred development. Customs collections (source of over half of public revenues at the time) and the Central Bank were among the responsibilities placed under the Economy Ministry's aegis, and successive ministers' policies were often enacted through presidential decrees.[4]

Its influence grew further when it absorbed the cabinet post of Minister of Public Works in 1991, to help facilitate Economy Minister Domingo Cavallo's privatizations initiative, and, in turn, divested oversight over the nation's goods-producing sectors with the 2008 designation of the Production Ministry by President Cristina Kirchner, in a bid to improve strained relations with the country's agrarian sector following the 2008 Argentine government conflict with the agricultural sector over export tariffs.[5]

The Ministry of the Economy was appropriated a US$1.7 billion operational budget in 2009, and employed over 4,000 staffers.[6]