This article is about the Hindu sage Kapila. For other uses, see Kapila (disambiguation).

Kapila (Hindi: कपिल ऋषि) is a given name of different individuals[1] in ancient and medieval Indian texts, of which the most well-known is the founder of the Samkhya school of Hindu philosophy.[2][3] Kapila of Samkhya fame is considered a Vedic sage,[3][4] estimated to have lived in the 6th-century BCE,[5] or the 7th-century BCE.[6]

Rishi Kapila is credited with authoring the influential Samkhya-sutra, in which aphoristic sutras present the dualistic philosophy of Samkhya.[7] Kapila's influence on Buddha and Buddhism have long been the subject of scholarly studies.[8][9]

Many historic personalities in Hinduism and Jainism, mythical figures, pilgrimage sites in Indian religion, as well as an ancient variety of cow went by the name Kapila.[6][10][11] 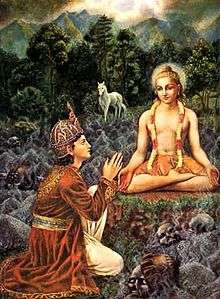 The name Kapila appears in many texts, and it is likely that these names refer to different people.[12][13] The most famous reference is to the sage Kapila with his student Āsuri, who in the Indian tradition, are considered as the first masters of Sāṅkhya school of Hindu philosophy. While he pre-dates Buddha, it is unclear which century he lived in, with some suggesting 6th-century BCE.[5] Others place him in the 7th century BCE.[12][14] This places him in the late Vedic period (1500 BCE to 500 BCE), and he has been called a Vedic sage.[3][4]

Kapila is credited with authoring an influential sutra, called Samkhya-sutra (also called Kapila-sutra), which aphoristically presents the dualistic philosophy of Samkhya.[7][15] These sutras were explained in another well studied text of Hinduism called the Samkhyakarika.[12] Beyond the Samkhya theories, he appears in many dialogues of Hindu texts, such as in explaining and defending the principle of Ahimsa (non-violence) in the Mahabharata.[2]

The name Kapila is used for many individuals in Hinduism, few of which may refer to the same person.[1]

The Rigveda X.27.16 – estimated to have been composed between 1500 and 1200 BCE[16][17] – mentions Kapila (daśānām ekam kapilam) which the 14th-century Vedic commentator Sayana thought refers to a sage; a view which Chakravarti in 1951 and Larson in 1987 consider unreliable, with Chakravarti suggesting that the word refers to one of the Maruts,[18] while Larson and Bhattacharya state kapilam in that verse means "tawny" or "reddish-brown";[19] as was also translated by Griffith.[note 1]

The Śata-piṭaka Series on the Śākhās of the Yajurveda – estimated to have been composed between 1200 and 1000 BCE[22] – mention of a Kapila Śākhā situated in the Āryāvarta, which implies a Yajurveda school was named after Kapila.[19] The term Kapileya, meaning "clans of Kapila", occurs in the Aitareya Brahmana VII.17 but provides no information on the original Kapila.[note 2] The pariśiṣṭa (addenda) of the Atharvaveda (at XI.III.3.4)[note 3] mentions Kapila, Āsuri and Pañcaśikha in connection with a libation ritual for whom tarpana is to be offered.[19] In verse 5.2 of Shvetashvatara Upanishad, states Larson, both the terms Samkhya and Kapila appear, with Kapila meaning color as well as a "seer" (Rishi) with the phrase "ṛṣiṃ prasūtaṃ kapilam ... tam agre.."; which when compared to other verses of the Shvetashvatara Upanishad Kapila likely construes to Rudra and Hiranyagarbha.[19] However, Max Muller is of view that Hiranyagarbha, namely Kapila in this context, varies with the tenor of the Upanishad, was distinct and was later used to link Kapila and assign the authorship of Sankya system to Hiranyagarbha in reverence for the philosophical system.[25]

Kapila, states George Williams, lived long before the composition of the Epics and the Puranas, and his name was coopted in various later composed mythologies.[26]

In the Dharmasutras and other texts

Fearlessness to all living beings from my side,
Svāhā!

Imagery in the Agamas

Kapila's imagery is depicted with a beard, seated in padmāsana with closed eyes indicating dhyāna, with a jaṭā-maṇḍala around the head, showing high shoulders indicating he was greatly adept in controlling breath, draped in dear skin, wearing the yagñopavīta, with a kamaṇḍalu near him, with one hand placed in front of the crossed legs, and feet marked with lines resembling outline of a lotus. This Kapila is identified with Kapila the founder of Sāṅkhya system;[43] while the Vaikhānasasāgama gives somewhat varying description. The Vaikhānasasāgama places Kapila as an āvaraņadēvāta and allocates the south-east corner of the first āvaraņa.[43] As the embodiment of the Vedas his image is seated facing east with eight arms; of which four on the right should be in abhaya mudra, the other three should carry the Chakra, Khaḍga, Hala; one left hand is to rest on the hip in the kațyavarlambita pose and other three should carry the Ṡaṅkha, Pāśa and Daṇḍa.[43]

Kapila is mentioned in chapter VIII of the Uttaradhyayana-sutra, states Larson and Bhattacharya, where a discourse of poetical verses is titled as Kaviliyam, or "Kapila's verses".[19]

The name Kapila appears in Jaina texts. For example, in the 12th century Hemacandra's epic poem on Jain elders, Kapila appears as a Brahmin who converted to Jainism during the Nanda Empire era.[11]

According to Jnatadharmakatha, Kapila was a contemporary of Krishna and the Vasudeva of Dhatakikhanda. The text further mentions that both of them blew their shankha (counch) together.[50]

Buddhists literature, such as the Jataka tales, state the Buddha was Kapila in one of his previous lives.[51][52][53]

Scholars have long compared and associated the teachings of Kapila and Buddha. For example, Max Muller wrote (abridged),

There are no doubt certain notions which Buddha shares in common, not only with Kapila, but with every Hindu philosopher. (...) It has been said that Buddha and Kapila were both atheists, and that Buddha borrowed his atheism from Kapila. But atheism is an indefinite term, and may mean very different things. In one sense, every Indian philosopher was an atheist, for they all perceived that the gods of the populace could not claim the attributes that belong to a Supreme Being (Absolute, the source of all that exists or seems to exist, Brahman). (...) Kapila, when accused of atheism, is not accused of denying the existence of an Absolute Being. He is accused of denying the existence of an Ishvara.

Max Muller states the link between the more ancient Kapila's teachings on Buddha can be overstated.[8] This confusion is easy, states Muller, because Kapila's first sutra in his classic Samkhya-sutra, "the complete cessation of pain, which is of three kings, is the highest aim of man", sounds like the natural inspiration for Buddha.[8] However, adds Muller, the teachings on how to achieve this, by Kapila and by Buddha, are very different.[8]

As Buddhist art often depicts Vedic deities, one can find art of both Narayana and Kapila as kings within a Buddhist temple, along with statues of Buddhist figures such as Amitabha, Maitreya, and Vairocana.[54]

In Chinese Buddhism, the Buddha directed the Yaksha Kapila and fifteen daughters of Devas to become the patrons of China.[55]

The following works were authored by Kapila, some of which are lost, and known because they are mentioned in other works; while few others are unpublished manuscripts available in libraries stated:[1]

Kapila, the founder of Samkhya, has been a highly revered sage in various schools of Hindu philosophy. Gaudapada (~500 CE), a Advaita Vedanta scholar, in his Bhasya called Kapila as one of the seven great sages along with Sanaka, Sananda, Sanatana, Asuri, Vodhu and Pancasikha.[57] Vyasa, the Yoga scholar, in his Yogasutra-bhasya wrote Kapila to be the "primal wise man, or knower".[57]