In economics and finance, risk aversion is the behavior of humans (especially consumers and investors), when exposed to uncertainty, to attempt to reduce that uncertainty. It is the reluctance of a person to accept a bargain with an uncertain payoff rather than another bargain with a more certain, but possibly lower, expected payoff. For example, a risk-averse investor might choose to put his or her money into a bank account with a low but guaranteed interest rate, rather than into a stock that may have high expected returns, but also involves a chance of losing value. 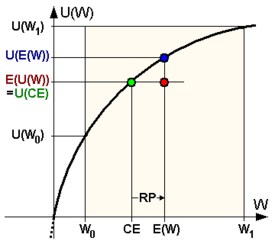 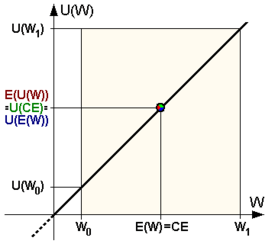 Utility function of a risk-neutral individual. 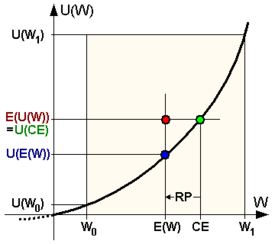 A person is given the choice between two scenarios, one with a guaranteed payoff and one without. In the guaranteed scenario, the person receives $50. In the uncertain scenario, a coin is flipped to decide whether the person receives $100 or nothing. The expected payoff for both scenarios is $50, meaning that an individual who was insensitive to risk would not care whether they took the guaranteed payment or the gamble. However, individuals may have different risk attitudes.[1][2][3]

A person is said to be:

The average payoff of the gamble, known as its expected value, is $50. The dollar amount that the individual would accept instead of the bet is called the certainty equivalent, and the difference between the expected value and the certainty equivalent is called the risk premium. For risk-averse individuals, it becomes positive, for risk-neutral persons it is zero, and for risk-loving individuals their risk premium becomes negative.

In expected utility theory, an agent has a utility function u(x) where x represents the value that he might receive in money or goods (in the above example x could be 0 or 100).

Time does not come into this calculation, so inflation does not appear. (The utility function u(x) is defined only up to positive linear affine transformation - in other words a constant offset could be added to the value of u(x) for all x, and/or u(x) could be multiplied by a positive constant factor, without affecting the conclusions).

). This risk premium means that the person would be willing to sacrifice as much as $10 in expected value in order to achieve perfect certainty about how much money will be received. In other words, the person would be indifferent between the bet and a guarantee of $40, and would prefer anything over $40 to the bet.

The higher the curvature of

, the higher the risk aversion. However, since expected utility functions are not uniquely defined (are defined only up to affine transformations), a measure that stays constant with respect to these transformations is needed. One such measure is the Arrow–Pratt measure of absolute risk-aversion (ARA), after the economists Kenneth Arrow and John W. Pratt,[4][5] also known as the coefficient of absolute risk aversion, defined as

The following expressions relate to this term:

The solution to this differential equation (omitting additive and multiplicative constant terms, which do not affect the behavior implied by the utility function) is:

and this can hold only if

. Therefore, DARA implies that the utility function is positively skewed; that is,

.[7] Analogously, IARA can be derived with the opposite directions of inequalities, which permits but does not require a negatively skewed utility function (

). An example of a DARA utility function is

In intertemporal choice problems, the elasticity of intertemporal substitution often cannot be disentangled from the coefficient of relative risk aversion. The isoelastic utility function

and the elasticity of intertemporal substitution

using l'Hôpital's rule shows that this simplifies to the case of log utility, u(c) = log c, and the income effect and substitution effect on saving exactly offset.

A time varying relative risk aversion can be considered.[11]

The most straightforward implications of increasing or decreasing absolute or relative risk aversion, and the ones that motivate a focus on these concepts, occur in the context of forming a portfolio with one risky asset and one risk-free asset.[4][5] If the person experiences an increase in wealth, he/she will choose to increase (or keep unchanged, or decrease) the number of dollars of the risky asset held in the portfolio if absolute risk aversion is decreasing (or constant, or increasing). Thus economists avoid using utility functions, such as the quadratic, which exhibit increasing absolute risk aversion, because they have an unrealistic behavioral implication.

Similarly, if the person experiences an increase in wealth, he/she will choose to increase (or keep unchanged, or decrease) the fraction of the portfolio held in the risky asset if relative risk aversion is decreasing (or constant, or increasing).

The notion of using expected utility theory to analyze risk aversion has come under criticism from behavioral economics. Matthew Rabin has showed that a risk-averse expected-utility maximizing individual who,

Rabin criticizes this implication of expected utility theory on grounds of implausibility. One solution to the problem observed by Rabin is that proposed by prospect theory and cumulative prospect theory, where outcomes are considered relative to a reference point (usually the status quo), rather than to consider only the final wealth.

Risk aversion in the brain

Attitudes towards risk have attracted the interest of the field of neuroeconomics and behavioral economics. A 2009 study by Christopoulos et al. suggested that the activity of a specific brain area (right inferior frontal gyrus) correlates with risk aversion, with more risk averse participants (i.e. those having higher risk premia) also having higher responses to safer options.[14] This result coincides with other studies,[15][16] that show that neuromodulation of the same area results in participants making more or less risk averse choices, depending on whether the modulation increases or decreases the activity of the target area.

In the real world, many government agencies, e.g. Health and Safety Executive, are fundamentally risk-averse in their mandate. This often means that they demand (with the power of legal enforcement) that risks be minimized, even at the cost of losing the utility of the risky activity. It is important to consider the opportunity cost when mitigating a risk; the cost of not taking the risky action. Writing laws focused on the risk without the balance of the utility may misrepresent society's goals. The public understanding of risk, which influences political decisions, is an area which has recently been recognised as deserving focus. David Spiegelhalter is the Winton Professor of the Public Understanding of Risk at Cambridge University, a role he describes as "outreach".[17]

A vaccine to protect children against the three common diseases measles, mumps and rubella was developed and recommended for all children in several countries including the UK. However, a controversy arose around fraudulent allegations that it caused autism. This alleged causal link was thoroughly disproved,[18] and the doctor who made the claims was expelled from the General Medical Council. Even years after the claims were disproved, some parents wanted to avert the risk of causing autism in their own children. They chose to spend significant amounts of their own money on alternatives from private doctors. These alternatives carried their own risks which were not balanced fairly, most often that the children were not properly immunized against the more common diseases of measles, mumps and rubella.

Mobile phones may carry some small[19][20] health risk. While most people would accept that unproven risk to gain the benefit of improved communication, others remain so risk averse that they do not. (The COSMOS cohort study continues to study the actual risks of mobile phones.)

Risk aversion theory can be applied to many aspects of life and its challenges, for example:

A recent experimental study with student-subject playing the game of the TV show Deal or No Deal finds that people are more risk averse in the limelight than in the anonymity of a typical behavioral laboratory. In the laboratory treatments, subjects made decisions in a standard, computerized laboratory setting as typically employed in behavioral experiments. In the limelight treatments, subjects made their choices in a simulated game show environment, which included a live audience, a game show host, and video cameras.[21] In line with this, studies on investor behavior find that investors trade more and more speculatively after switching from phone-based to online trading[22][23] and that investors tend to keep their core investments with traditional brokers and use a small fraction of their wealth to speculate online.[24]