This article is about the river flowing through Wiltshire, Hampshire and Dorset. For the small river in the New Forest, see Avon Water. For other rivers called Avon, see River Avon.

The River Avon is a river in the south of England. The river rises in the county of Wiltshire and flows through the city of Salisbury and the county of Hampshire before reaching the English Channel through Christchurch Harbour in the county of Dorset.

It is sometimes known as the Salisbury Avon or the Hampshire Avon in order to distinguish it from the various other River Avons in England. It is one of the rivers in Britain in which the phenomenon of anchor ice has been observed.[1] The Avon is thought to contain more species of fish than any other river in Britain.[2]

The river's name is a tautology: Avon [Ay-von] is derived from the Proto-Brythonic word meaning "river", and therefore the river's name means River River.

The Avon begins as two separate rivers. The western Avon rises to the east of Devizes, draining the Vale of Pewsey, and the eastern Avon rises just east of Pewsey adjacent to the Kennet and Avon Canal. These two merge at Upavon, flowing southwards across Salisbury Plain through Durrington, Amesbury and Salisbury. To the south of Salisbury it enters the Hampshire Basin, flowing along the western edge of the New Forest through Fordingbridge and Ringwood, meeting up with the River Stour at Christchurch, to flow into Christchurch Harbour and the English Channel at Mudeford.

All the significant direct and indirect tributaries of the Avon, including the Nadder, Wylye, Bourne and Ebble, converge within a short distance around Salisbury.

About half of the length of the river is within Wiltshire, and only relatively short proportions are entirely within the current boundaries of Hampshire or Dorset. However, for part of its path the river forms the border between Dorset and Hampshire, and prior to the 1974 reorganization of local government the whole of the section now in or bordering Dorset was wholly within Hampshire. As there are two rivers with the name Avon in Wiltshire, this led to the river being popularly known as the Hampshire Avon or the Salisbury Avon.

The Avon Valley Path runs parallel with the river from Salisbury to Christchurch. 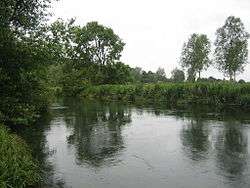 A view of the River Avon in Hampshire near Fordingbridge.

Canoeists seeking legitimate access to the Avon have recently identified a long-forgotten Act in their favour. The "Act for making the River Avon navigable from Christchurch to the city of New Sarum" was enacted in 1664 under Charles II.[3] This act has not been repealed, hence remains in force providing a legal right of navigation.

The position on rights of Navigation is neither clear or established.

The river Avon is SSSI, SAC and RAMSAR where water vessel activity can compromise the specific features.

The DEFRA & Fish Legal opinion seeks to set out the position on public rights of navigation as follows:

There is also a sister project called Living River which runs from 2006 to 2010. This is providing better access and recreation, as well as biodiversity.[7]

Both of these projects had been shortlisted for the 2009 Thiess International Riverprize competing against four other projects: the Yellow River in China, Lake Simcoe in Canada, the Polochic Basin in Guatemala and the Lower Owens River in the USA. The prize for 2009 was awarded to Lake Simcoe.[8]