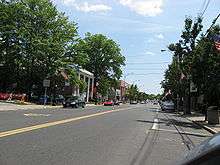 Roselle Park was incorporated as a borough by an act of the New Jersey Legislature on March 22, 1901, from portions of Union Township.[21][22][23] Roselle Park's name is derived from the Roselle Land Improvement Company, which was created in 1866 to lay out a community around the Mulford Station on the Central Railroad of New Jersey. The name "Roselle" is said to have been based on the company's founder, John Conklin Rose[24] or from John Pierre Roselle, a friend of the railroad's president.[25]

Elizabethtown & Somerville Railroad passed through in 1839, as the first railroad in Northern New Jersey. The first store in the world to be lit by electric light was Stone's Store on Westfield Avenue, lit by Thomas Edison's carbon filament prototype.[27]

The formation of Roselle Park in 1901 occurred due to a number of grievances based on a lack of sufficient public services, including; lack of a modern sewage system, poor schools, neglected roads, and minimal public safety measures, which still plague the borough to this day.[28]

In 1907, the first poured concrete building in the world, now the Robert Gordon School, was built in Roselle Park using Edison's revolutionary process.[29] Roselle Park was home to the factory and lab of Marconi Wireless Telegraph, and in late 1921 became the site of WDY, the first radio broadcasting station licensed in the state of New Jersey.[26]

Unincorporated communities, localities and place names located partially or completely within the borough include Lorraine.[30]

The borough is bordered to the northeast by Union Township, to the northwest by Kenilworth, to the east by Elizabeth, to the south by Roselle and to the west by Cranford.[31] 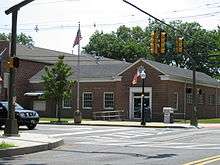 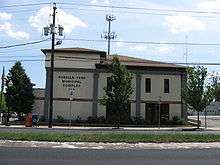 The Borough of Roselle Park is governed under the borough form of New Jersey municipal government. The governing body consists of a mayor and a Borough Council comprising six council members, with all positions elected on a partisan basis as part of the November general election.[3] The borough form of government used by Roselle Park, the most common system used in the state, is a "weak mayor / strong council" government in which council members act as the legislative body with the mayor presiding at meetings and voting only in the event of a tie. The mayor can veto ordinances subject to an override by a two-thirds majority vote of the council. The mayor makes committee and liaison assignments for council members, and most appointments are made by the mayor with the advice and consent of the council.[39][40] Roselle Park is divided into five election districts, referred to as wards, with one councilperson elected from each ward, and one councilperson elected at-large, with two council seats up for election each year, and is one of only two boroughs statewide that use wards (the other is Roselle). The mayor is elected to a four-year term and councilpersons are elected to three-year terms.[41][42]

On December 4, 2015, Charlene Storey announced that she would resign from here seat effective January 7, 2016, due to her opposition to the council's decision to rename the annual ceremony from "The Tree Lighting" to "The Christmas Tree Lighting", citing issues of establishment of a preferred religion.[49] However, the next day, Storey and Mayor Hokanson reached an agreement stating that Storey would rescind her resignation and that she would chair a committee on diversity in the borough.[50]

In January 2015, Joseph Petrosky was chosen by the borough council from among three candidates offered by the municipal Democratic committee to fill the Second Ward seat vacated by Charlene Storey when she took office to fill the at-large seat.[51]

In the wake of charges that he had stolen campaign signs from a neighbor's lawn, Fifth Ward Michael Yakubov announced in January 2015 that he would be resigning from office in March.[52] Richard Templeton was selected by three candidate nominated by the Republican municipal committee and appointed to Yakubov's vacant seat in March 2015, before switching parties and becoming a Democrat five days after he took office.[53]

On November 3, 2015 Republican Thos Shipley bested incumbent Rich Templeton by 60% of the vote [54] On January 7, 2016, Thos Shipley made Borough history twice as the first African American and the first openly gay member of the governing body sworn into office. Councilman Shipley is also married to former 16-year Mayor Joseph DeIorio, the longest-serving mayor in Borough history.[55][56]

Roselle Park is located in the 10th Congressional District[57] and is part of New Jersey's 21st state legislative district.[10][58][59] Prior to the 2010 Census, Roselle Park had been part of the 7th Congressional District, a change made by the New Jersey Redistricting Commission that took effect in January 2013, based on the results of the November 2012 general elections.[60]

For the 2016–2017 session (Senate, General Assembly), the 21st Legislative District of the New Jersey Legislature is represented in the State Senate by Thomas Kean Jr. (R, Westfield) and in the General Assembly by Jon Bramnick (R, Westfield) and Nancy Munoz (R, Summit).[65] The Governor of New Jersey is Chris Christie (R, Mendham Township).[66] The Lieutenant Governor of New Jersey is Kim Guadagno (R, Monmouth Beach).[67]

The Roselle Park Veterans Memorial Library was renamed in the early 1980s in honor of the veterans of Roselle Park who made the building possible. The library currently has more than 10,000 square feet (930 m2) of space used to store traditional books in addition to computers, books on tape, videos, CD's, Meeting Room, information center, pictures, and music tapes. The library offers a photocopier and fax service and allows its patrons to reserve and renew materials over the phone and online. The library offers free Wi-Fi access.[104]

The Veterans Memorial Library offers an array of events for an older audience such as charity projects, book discussions, and a Book of the Month Club.[105] The Veterans Memorial Library also caters to children and young teens with many different events. Events such as Homework Help, No Bullying Resources, and Crazy For Crafts, among other things, are offered free of charge and children are encouraged to participate.[106]

Route 28 passes through Roselle Park, and the Garden State Parkway skirts the western boundary of the borough.

New Jersey Transit Bus Operations provides bus service on the 58 with service from Elizabeth to Kenilworth, on the 94 to Newark and on the 113 to the Port Authority Bus Terminal in New York City.[108]

Newark Liberty International Airport is approximately 10 minutes away. Linden Airport, a general aviation facility, is in nearby Linden.

Roselle Park has a rich railroading heritage. A steam locomotive adorns the Borough seal, and the town is very welcoming to railroad enthusiasts.

The Elizabethtown & Somerville railway began laying rails through what would become Roselle Park in 1839. It eventually became the Central Railroad of New Jersey between Jersey City, New Jersey and Scranton, Pennsylvania. Throughout the years as traffic grew, the line would grow to four main tracks, and also offered trains of Reading Company and the Baltimore and Ohio Railroad.[26]

Roselle Park and Roselle formerly shared a rail station on the CNJ mainline. Passenger service east of Bayonne ended on April 30, 1967. Shuttle service between Bayonne and Cranford continued on until August 1978 but eventually ended, resulting in the closure of the old station on Chestnut Street.[109] The line continued to see operation as an access route to the NJTransit/NJDOT railroad shops at Elizabethport until the mid-1980s. It is currently out of service and unused, as the Conrail Elizabeth Industrial Track.

Competition would come as the Lehigh Coal and Navigation Company realized that railroading was a more efficient mode of transportation for their coal than a canal system. They formed the Lehigh Valley Railroad, and began building Eastward in 1853. By 1872, they had reached Roselle, and formed the subsidiary Newark and Roselle Railway in order to continue building East to the Hudson River. April 1, 1976 the Lehigh Valley Railroad became part of the Consolidated Rail Corporation, also known as Conrail and became known as their "Lehigh Line". On June 1, 2001, Conrail was purchased and split between Norfolk Southern (60%) and CSX (40%), and became "shared assets". Conrail continues to operate the Lehigh Line between Newark and Manville for Norfolk Southern and CSX. In addition to New Jersey Transit the line sees anywhere from 35-45 freights per day from three railroads; Conrail, Norfolk Southern, and CSX. Canadian Pacific (formerly Delaware and Hudson Railway) utilized trackage rights into Oak Island Yard in Newark until 2012. The track is Norfolk Southern's primary access on their northern transcontinental route into and out of the New York City metropolitan area, and is also part of CSX's primary North-South corridor between New England and Jacksonville, Florida.

The Roselle Park train station offers New Jersey Transit commuter rail service as part of their Raritan Valley Line service. This was a result of the Aldene Connection in Roselle Park between tracks of the Central Railroad and Lehigh Valley Railroad, which opened April 30, 1967, allowing passengers to travel directly to Newark Penn Station and change there for trains to New York Penn Station, rarther than traveling to the Central Railroad of New Jersey Terminal in Jersey City and taking ferries into Manhattan.[110] In January 2015, New Jersey Transit began service directly to Newark Penn Station through the use of dual-powered diesel and overhead electric ALP-45DP locomotives.[111] Currently the station is located at milepost 16.0 on the Conrail Lehigh Line, on the corner of Chestnut Street and West Lincoln Avenue; the same location of the original Lehigh Valley station. In addition to local travel, from here, one can take the train to Newark, New Jersey or New York City and connect to various modes of travel to nearly anywhere in the U.S. and Canada on Amtrak.

The borough was once served by the Rahway Valley Railroad. The line was exempted in 1991 by then Rahway Valley Railroad controller Delaware Otsego Corporation, and was given to the County of Union.[112] It has remained dormant since. However, beginning in 2004, the Union County Board of Chosen Freeholders began taking steps to reactivate the routes. They named the Morristown and Erie Railway as designated operator and funded the beginning of right-of-way renewal, though the project has faced opposition from residents who incorrectly believed that the line would be used to transport trash.[113] All funding for the project was spent on litigation with opponents. Currently the Morristown and Erie Railway is awaiting further funding to complete the work. As of 2011, the project has halted and no further steps are being taken to reactivate the railway.

People who were born in, residents of, or otherwise closely associated with Roselle Park include: