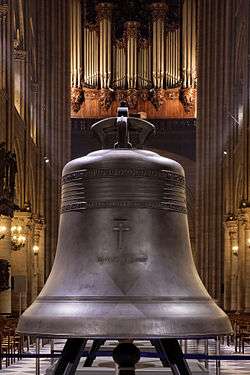 New bell in the Notre Dame de Paris (2013), made by Eijsbouts

The workshop was founded in 1872 by Bonaventura Eijsbouts as a "factory for tower clocks." In 1893 Eijsbouts was joined by his 15-year-old son, Johan, and the workshop expanded to begin supplying striking and swinging bells, which were cast at other foundries, with their clocks.

In 1924, Johan's oldest son, Tuur Eijsbouts, joined the company. Tuur was technically minded and inventive. He took the initiative to learn how to cast bells himself. After years of experimentation, an in-house bell foundry was installed in 1947.

The company is still recognized for their cast bells, which are used in carillons and church bells. In 2006 Eijsbouts cast the largest swinging bell in the world.

Royal Eijsbouts has been involved in extensive research programs in campanology (the art of bell manufacturing) for decades. Those efforts have resulted in computer applications with which all aspects of bell sound and bell shape can be accurately calculated.

This article is issued from Wikipedia - version of the 6/18/2015. The text is available under the Creative Commons Attribution/Share Alike but additional terms may apply for the media files.