For other uses, see Suzu (disambiguation). 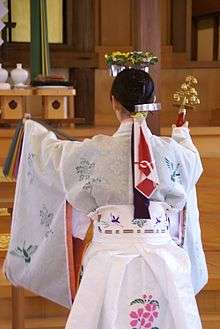 Shinto priestess with suzu bells in her right hand 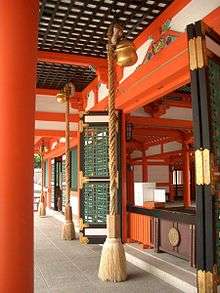 Suzu hanging under the eaves of a Shinto shrine

Suzu (鈴) is a round, hollow Japanese Shinto bell that contains pellets that sound when agitated. They are somewhat like a jingle bell in form, though the materials produce a coarse, rolling sound. Suzu come in many sizes, ranging from tiny ones on good luck charms (called omamori (お守り)) to large ones at shrine entrances.

At Shinto shrines, large Suzu drape over entrances, as it is said that ringing them calls kami, allowing one to acquire positive power and authority, while repelling evil. Handheld clustered Suzu, similar to jingle bells, are used musically at Shinto ceremonies.

In Edo Castle the larger corridor to the Ōoku which only the Shōgun as the only male was allowed to enter, was called Osuzu Rōka (御鈴廊下, large corridor of the bells), derived from the ringing of the suzu bells to announce his entrance.

Suzu were traditionally made by metal craft artisans. With the onset of industrialisation, they were made by machines. The ones produced by hand however are still considered of higher quality due to the richer and more melodious sound.

Suzu is also a female name in Japan meaning "Bell" or "Tin". The kanji for suzu is often used to form a compound name, such as the well-known surname Suzuki, meaning "bell and tree".