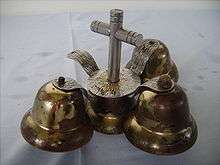 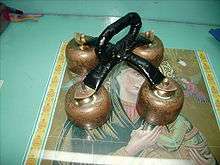 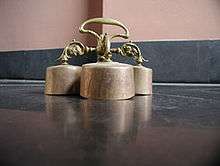 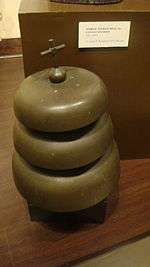 Mid-1900s three-tiered bell (for transubstantiation, Our Lady of Manaoag).

In the Latin Rite of the Catholic Church, in Lutheranism, in Methodism, and in the Anglican Communion, an altar or sanctus bell is typically a small hand-held bell or set of bells. The primary reason for the use of sanctus/altar bell(s) is to create a joyful noise to the Lord as a way to give thanks for the miracle taking place atop the Altar of Sacrifice.[1] An ancillary function of the bell(s) is to focus the attention of those attending the Mass that a supernatural event is taking place on the altar.[1] Such bells are also commonly referred to as the Mass bell, sacring bell, Sacryn bell, saints' bell, sance-bell, or sanctus bell (or "bells", when there are three).[1] and are kept on the credence table or some other convenient location within the sanctuary.

Use in the Catholic Church

"A little before the Consecration, when appropriate, a server rings a bell as a signal to the faithful. According to local custom, the server also rings the bell as the priest shows the host and then the chalice."[2] The usual moment chosen for giving the signal of the approach of the Consecration is when the priest stretches out his hands over the host and the chalice while reciting the epiclesis, but another moment traditionally used for this purpose is at the first words of the Sanctus.[3] Pre-1970 editions of the Roman Missal, prescribed the choice of the Sanctus as the moment for the signal,[4] but ringing the bell at both the Sanctus and the epiclesis was common practice in the first half of the twentieth century.[5] They also prescribed a triple ringing of the bell at each showing of the consecrated elements.[6]

On 10 September 1898, the Congregation of Sacred Rites declared inappropriate the use of a gong instead of the altar bell.[1]

The ringing of an altar bell began probably in the thirteenth century.[7] It is not mentioned in the original 1570 Roman Missal of Pope Pius V[8] and was not introduced into papal Masses until the time of Pope John Paul II.[7]

When, before the reintroduction of concelebration, priests frequently said Mass at a side altar while a public celebration was taking place at a nearby altar, the Congregation of Sacred Rites found it necessary to issue a prohibition against ringing a bell at the Mass celebrated at the side altar.[9] The same rule was made even for a Solemn Mass celebrated at an altar other than that at which the Blessed Sacrament is publicly exposed, and allowed the ringing of the altar bell to be omitted when Mass was celebrated at the altar of exposition.[10]

During the Gloria on Christmas Midnight Mass, the altar bells are rung throughout the entire song by many churches to celebrate their first use in the Liturgical Year because they are not used during the season of Advent.

In branches of Lutheranism, altar bells are rung at the two appropriate times during the Words of Institution ("This is my body... This is the cup my blood...") to signify the real presence.[11]

Anglican parishes use the altar bell, which is rung to signify the Real Presence of Christ in the sacred Elements. During the Eucharist, it is usually rung three times - once before the Words of Institution, and once at each elevation of the Host and of the Chalice. It may also be rung to indicate the time that the faithful may come forward to receive Communion.

The bells are also rung when the monstrance or ciborium is exposed or processed, for example when moving the reserved Sacrament from a side altar to the high altar. Custom differs concerning its use at Low Mass, or during Lent and Holy Week.[1]

In some Methodist churches, particularly the United Methodist Church of the United States, altar bells are used two different times during common services held on Sundays.[12] The Chimes of the Trinity are rung by an acolyte before the prelude of the service and at the end of the benediction. The Chimes of the Trinity is the ringing of the bell three times to represent the Father, Son, and Holy Spirit.