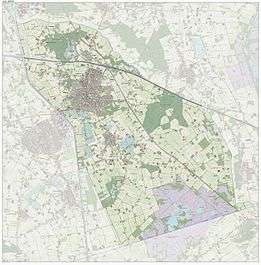 pronunciation ) is a municipality and a town in the southern Netherlands.

It is home to the Royal Eijsbouts bell foundry and also a carillon museum.

The spoken language is Peellands, an East Brabantian dialect.[5]

Asten has a rich history going back to the Roman period. In the swamp of the village's national park 'De Peel' an ancient Roman centurion helmet was found. Silhouets of Hunter-Gatherer and Agricultural societies were also found in the area. The village has a castle dating back to the 12th century, at the south of the current village. It has also given its name to the village: "Aa-Stein", or "stone building on the river Aa". A second stone-built fortified building was suspected at the north, at the site of the current Slotweg ("castle road") to be precise. Some stone fragments have been excavated, although no conclusive evidence of a fortified building has been produced here. The village was pillaged and burnt twice in the 17th century, by Austrian and Swedish army troops.