For other uses, see Sadhana (disambiguation). 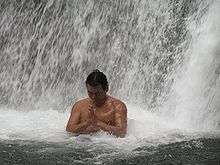 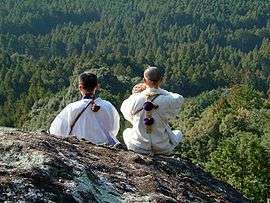 Sādhana (Sanskrit: साधन; Tibetan: སྒྲུབ་ཐབས་ , THL druptap, Chinese: 修行), literally "a means of accomplishing something",[1] is an ego-transcending spiritual practice.[2] It includes a variety of disciplines in Hindu,[3] Buddhist,[4] Jain[5] and Sikh traditions that are followed in order to achieve various spiritual or ritual objectives.

In particular, sādhana can refer to a tantric liturgy or liturgical manual, that is, the instructions to carry out a ritual.

The historian N. Bhattacharyya provides a working definition of the benefits of sādhana as follows:

[R]eligious sādhana, which both prevents an excess of worldliness and molds the mind and disposition (bhāva) into a form which develops the knowledge of dispassion and non-attachment. Sādhanā is a means whereby bondage becomes liberation.[6]

Iyengar (1993: p. 22) in his English translation of and commentary to the Yoga Sutras of Patanjali defines sādhana in relation to abhyāsa and kriyā:

Sādhana is a discipline undertaken in the pursuit of a goal. Abhyāsa is repeated practice performed with observation and reflection. Kriyā, or action, also implies perfect execution with study and investigation. Therefore, sādhanā, abhyāsa, and kriyā all mean one and the same thing. A sādhaka, or practitioner, is one who skillfully applies...mind and intelligence in practice towards a spiritual goal.[7]

The term sādhana means spiritual exertion towards an intended goal. A person undertaking such a practice is known in Sanskrit as a sādhu (female sādhvi), sādhaka (female sādhakā) or yogi (Tibetan pawo; feminine yogini or dakini, Tibetan khandroma). The goal of sādhana is to attain some level of spiritual realization, which can be either enlightenment, pure love of God (prema), liberation (moksha) from the cycle of birth and death (saṃsāra), or a particular goal such as the blessings of a deity as in the Bhakti traditions.

Sādhana can involve meditation, chanting of mantra sometimes with the help of prayer beads, puja to a deity, yajna, and in very rare cases mortification of the flesh or tantric practices such as performing one's particular sādhana within a cremation ground.

Traditionally in some Hindu and Buddhist traditions in order to embark on a specific path of sādhana, a guru may be required to give the necessary instructions. This approach is typified by some Tantric traditions, in which initiation by a guru is sometimes identified as a specific stage of sādhana.[8] On the other hand, individual renunciates may develop their own spiritual practice without participating in organized groups.[9]

The tantric rituals are called "sādhana". Some of the well known sādhanas are:

Kværne (1975: p. 164) in his extended discussion of sahajā, treats the relationship of sādhana to mandala thus:

[E]xternal ritual and internal sadhana form an indistinguishable whole, and this unity finds its most pregnant expression in the form of the mandala, the sacred enclosure consisting of concentric squares and circles drawn on the ground and representing that adamantine plane of being on which the aspirant to Buddhahood wishes to establish himself. The unfolding of the tantric ritual depends on the mandala; and where a material mandala is not employed, the adept proceeds to construct one mentally in the course of his meditation.[11]