In Hinduism, Hayagriva is also considered an avatar of Vishnu.[1] He is worshipped as the God of knowledge and wisdom, with a human body and a horse's head, brilliant white in color, with white garments and seated on a white lotus. Symbolically, the story represents the triumph of pure knowledge, guided by the hand of God, over the demonic forces of passion and darkness.

Origins about the worship of Hayagriva have been researched, some of the early evidences dates back to 2,000 BCE,[2] when Indo-Aryan people worshiped the horse for its speed, strength, intelligence.[3] Hayagriva is one of the prominent deity in Vaishnava tradition. His blessings are sought when beginning study of both sacred and secular subjects. Special worship is conducted on the day of the full moon in August (Śravaṇa-Paurṇamī) (his avatāra-dina) and on Mahanavami, the ninth day of the Navaratri festival. He is also hailed as "Hayasirsa".[4] Hayaśirṣa means haya=Horse, śirṣa=Head.

This verse is originally from the Pañcarātra Agamas but is now popularly prefixed to the Hayagriva Stotram of the 13th-century poet-philosopher Vedanta Desika. It is very popular among devotees of Hayagrīva. 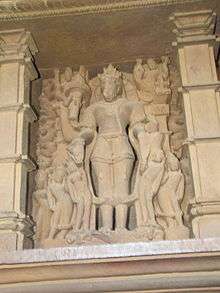 He has four lotus hands, with one in the mode of bestowing knowledge; another holds books of wisdom, and the other two hold the Conch and Discus. His beauty, like fresh cut crystal, is an auspicious brilliance that never decays. May this Lord of speech who showers such cooling rays of grace on me be forever manifest in my heart!

In the Mahavairocana-sutra [Sūtra of the Great Sun] translated and copied in 1796 by I-hsing it says:

“Beneath the buddhas is Hayagriva. His body is the color of the sun at dawn. He wears flaming effulgence and skulls as a garland. His nails are long and sharp; his face shows a pair of bare tiger’s fangs. His hair is that of a burning lion’s mane.He is awesomely powerful and fierce! This is the fierce Vidyaraja of the Lotus section. He is just like a horse-jewel of a Cakravartin that wanders the four continents, nowhere and never does he rest, having all the great and terrible force of all the buddhas’. This is his nature, and therefore he possesses this terrible and all-mighty light. Amidst the greatest obstacles of death and evil he is without the slightest care for his own welfare, his conspicuous and uncommon gallantry, intrepidity, and wrath is legendary among the gods, and therefore he easily and quickly vanquishes all who oppose him! Many others submit to him at first sight! This is because though he is fierce and terrible; his heart is full of compassion (unbiased, dispassionate understanding).”

Later on Hayagriva is referred to as the “Horse necked one”, Defender of faith”, the “Terrible executioner”, the “Excellent Horse”, and the “Aerial horse”.

This said, the Horse Avatar of Lord Vishnu is seen as pulling the sun up to the heavens every day, bringing light to darkness. Hayagriva’s consort is Marichi, or Lakshmi ), the goddess of the rising sun, more accurately the sun’s light which is the life force of all things, and which is seen as the female [in, yin] aspect of Hayagriva. This relationship is the classic nonduality of the Hindu tantra. Marichi represents the essence of the power of creation of the cosmos, and is the in/yin half of Dainichi Nyôrai. Whereas Hayagriva represents the other yang/yô aspect, that of the manifestation of the power of yin/in as action. In other words, Hayagriva represents the manifestation of yin/in as the power and action of the cosmos manifested as action. This is the very definition of tantra, that of action.

In several other sources he is a white horse who pulls the sun into the sky every morning. In others such as the great epic Taraka-battle where the gods are fallen on and attacked by the Danava’s [demons], Vishnu appears as a great ferocious warrior called Hayagriva when he comes to their aid. It says;

“Hayagriva appears in his chariot, drawn by 1,000 powerful steeds, crushing the enemies of the gods beneath him!” 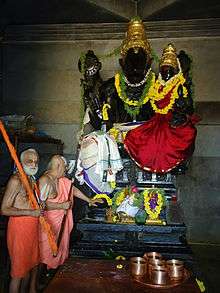 There are many other references to Hayagriva throughout the Mahabharata. It is said that Vishnu comes from battle as a conqueror in the magnificent mystic form of the great and terrible Hayagriva;

“The great Hayagriva having been praised in this way by the different saints and ascetics, assumes a great white horses head. The verda’s [mantras] made up his shape, his body built of all the great gods; in the middle of his head was Shiva, in his heart was Brahmā [god of heaven]; the rays of sun (Marichi) were his mane, the sun and moon his eyes; the Vasus and Sadhyas were his legs, in all his bones were the gods. Agni [Ka-ten; god of fire] was his tongue, the goddess Satya his speech, while his knees were formed by the Maruts and Varuna. Having assumed this form, a awesome wonder to behold to the gods, he vanquished the asura, and cast them down, with eyes that were red with anger.”

Invariably, Hayagriva is depicted seated, most often with his right hand either blessing the supplicant or in the vyākhyā mudrā pose of teaching. The right hand also usually holds a akṣa-mālā (rosary), indicating his identification with meditative knowledge. His left holds a book, indicating his role as a teacher. His face is always serene and peaceful, if not smiling. Unlike his Buddhist counterpart, there is no hint of a fearsome side in the Hindu description of this deity. Indeed, the two deities seem to be totally unrelated to one another.

Hayagriva is sometimes worshiped in a solitary pose of meditation, as in the Thiruvanthipuram temple. This form is known as Yoga-Hayagriva. However, he is most commonly worshipped along with his consort Lakshmi and is known as Lakshmi-Hayagriva. Hayagriva in this form is the presiding deity of Mysore's Parakala Mutt, a significant Sri Vaishnavism monastic institution. 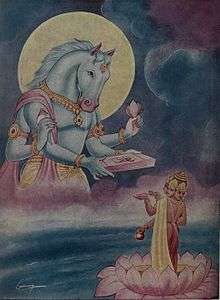 Hyagreeva restoring Vedas to Brahma which were taken to Rasatala

A legend has it that during the creation, the demons Madhu-Kaitabha stole the Vedas from Brahma, and Vishnu then took the Hayagriva form to recover them. The two bodies of Madhu and Kaitabha disintegrated into twelve pieces (two heads, two torsos, four arms and four legs). These are considered to represent the twelve seismic plates of the Earth. Yet another legend has it that during the creation, Vishnu compiled the Vedas in the Hayagrīva form.

Lord Hayagriva is also amongst the deities present at the Srirangam Temple. Hayagreeva in Srirangam is very famous for children's education. The Sannidhi is very beautiful and all rituals done according to Vedic principles very strictly.

A great devotee named ŚrīVadirajatirtha of Udupi Śrī Kṛṣṇa Mutt used to offer cooked horse gram (Kollu) to Lord Hayagreeva.[5] He used to recite the Hayagrīva Śloka and keep the offerings on his head. Lord Hayagrīva would come as a beautiful white horse form and would eat the horse gram. As a very staunch devotee, Vadirajatirtha would recite the following sloka -

There is no auspiciousness greater than Hayagrivan. Nothing is more sacred than Sri Hayagrivan to destroy our accumulated sins. No other God is superior to Hayagrivan. No one grieves after performing Śaraṇagati at the sacred feet of Hayagrivan.

Hayagriva is listed as one of the ten incarnations of Vishnu in Canto 10 (skandh 10), chapter 40 of the Śrīmadbhagavatam, and Akrūra's prayer contains Hayagriva's name when he had a vision while bathing in Yamuna.

There is a story that more than 500 years ago, a devotee from the Daivajña Brahmin community was casting an idol of Lord Gaṇapati, when it shaped itself in the image of Lord Hayagriva. Sarvabhauma Sri Vadiraja Guru Swamiji had a dream about this legend which inspired him to approach that devotee and take the idol from him in reverence. He then installed it in Shri Sode Vadiraja Mutt. Since then it has been worshipped there as the originating God of the Daivajnya Brahmin community.

The members of the community who were originally Smartha Brahmins, were instructed in Dvaita philosophy and received into the fold as Mukhya Śiṣyas by the revered Sri Vadiraja Teertha. To this day, Daivajña Brahmins continue to make offerings to the Mutt and Lord Hayagriva. 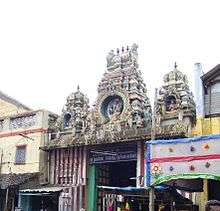 Seen in center is Lakshmi Hayagreeva Vigraha at Parakala Mutt

Most of the major Vishnu temples in Tamil Nadu have a separate shrine for Lord Hayagriva.

Influence on other cultures

In the 2015 documentary series, The Creatures of Philippine Mythology, the spread of Hinduism and the imagery of Hayagriva is tracked through South East Asia. It is speculated that Hayagriva influenced the image of the Philippine horse-headed folk spirit, the Tikbalang.[6]