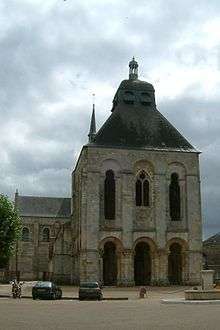 Saint-Benoît-sur-Loire is a commune in the Loiret department in north-central France.

The monastery, known for the Fleury Playbook, was pillaged and damaged multiple times over the course of history, including during the Norman conquests and the French Revolution. The current abbey church is in the Romanesque style and dates from the eleventh century. A community of approximately 40 monks currently resides in the monastery.

This article is issued from Wikipedia - version of the 1/25/2016. The text is available under the Creative Commons Attribution/Share Alike but additional terms may apply for the media files.