Santa Cruz (Spanish pronunciation: [ˈsanta ˈkɾus]) is a province of Argentina, located in the southern part of the country, in Patagonia. It borders Chubut province to the north, and Chile to the west and south, with an Atlantic coast on its east. Santa Cruz is the second-largest province of the country (after Buenos Aires province), and the least densely populated in mainland Argentina.

The indigenous people of the province are the Tehuelches, who despite European exploration from the 16th century onwards, retained independence until the late 19th century. Soon after the Conquest of the Desert in the 1870s, the area was organised as the Territory of Santa Cruz, named after its original capital in Puerto Santa Cruz. The capital moved to Rio Gallegos in 1888 and has remained there ever since. Immigrants from various European countries came to the territory in the late 19th and early 20th century during a gold rush. Santa Cruz became a province of Argentina in 1957. 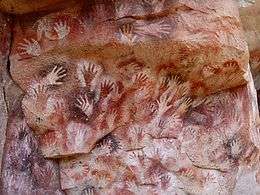 The Tehuelches inhabited these lands before the arrivals of the Spanish colonisation. In 1520 Ferdinand Magellan arrived to what is currently known as San Julián Bay. 15 years later Martín de Alcazaba explored the area near the Chico River, which he named Gallegos River. Because of the attacks of British privateers, and after the visit of Francis Drake in 1578, the Spaniards sent Pedro Sarmiento de Gamboa to fortify and map the Strait of Magellan and prevent access to Spanish posts in the Pacific.

In the middle of the 18th century, the Jesuits settled in the area, establishing a few missions. When the Viceroyalty of the Río de la Plata was created in 1776, the region was set under the rule of Buenos Aires. Antonio de Biedma founded Nueva Colonia near present Puerto Deseado and Floridablanca not far from Puerto San Julián, both of them shut down later by Viceroy Vertíz.

Between 1825 and 1836 there were a series of explorations of the regions, including that of Charles Darwin in 1834. In 1860 commander Luis Piedrabuena established a base on Isla Pavón in the estuary of Puerto Deseado.

At the beginning of 20th century, a large European immigration began to arrive to the almost uninhabited zone; Spanish, Germans, British and Slavs were the most numerous among them. They came mainly to escape the growing conflicts of World War I, and were attracted by the wool industry of the area. The end of the war meant a sharp reduction in the amount of exports, bringing a serious economic crisis to Santa Cruz. 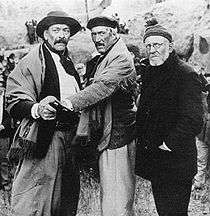 Scene from La Patagonia rebelde. Based on an ill-fated local strike in 1922, the 1974 epic was made with the encouragement of Santa Cruz's governor.

The ideals of progressivism, brought by the Spanish immigrants, grew among the workers who, working in Santa Cruz's harsh environment under often sub-human conditions, decided to strike in 1922. The strike was severely and harshly repressed by the government, culminating in the events of the Patagonia Trágica ("Tragic Patagonia"), the execution of dozens of strikers.

In 1944 the Military zone of Comodoro Rivadavia was created, which encompassed the northern part of the National Government of Santa Cruz and the southern part of Chubut Province. This jurisdiction lasted until the abolition of the measures in 1955. The Territory of Santa Cruz acquired province status in 1957. 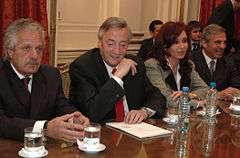 The return to democracy in Argentina in 1983 brought new, mostly young leadership to Santa Cruz's elected posts, among them a well-known local country lawyer named Néstor Kirchner, elected that year to the Río Gallegos City Council. Elected mayor in 1987 and governor in 1991, Kirchner helped negotiate a US$535 million payout for his province following the 1993 privatization of the state-owned oil concern YPF. Earning plaudits for his careful administration of the funds, Kirchner was elected president of Argentina in April 2003, following the withdrawal of Carlos Menem from a runoff which Kirchner was projected to win handily.

Presiding over four years of expansion totalling 42% (the best performance for the Argentine economy since the 1880s),[3] Pres. Kirchner steered record spending into public works (particularly those in his province, as is customary for Argentine presidents). 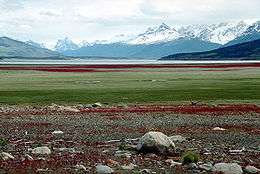 To the west, the Andes at these latitudes are lower than in the centre and north of Argentina, but still have year-round snow. An immense ice sheet feeds the numerous glaciers.

From the centre to the Atlantic coast in the east, plateaux of descending height dominate the landscape. The Atlantic coastline is a mixture of beaches and cliffs. In Gran Bajo de San Julián, the Laguna del Carbón is 105 meters below sea level, and is the lowest point in the Western and Southern Hemispheres.

The Andes block most of the incoming frontal systems and as a result, most of the rainfall occurs in the western side of the mountains, with precipitation rapidly decreasing eastward.[4] As a result, except for the westernmost parts of the province where precipitation is abundant and under more influence from the Pacific, much of the province is dry.[4] Unlike the Northern Hemisphere where there are large land masses to allow cold temperatures, cold fronts, which usually originate from the southwest and move northeast are moderated by the Pacific Ocean, resulting in less intense cold temperatures.[4] Similar to much of Patagonia, the climate of the province is characterized by strong westerlies, which also enhances evapotranspiration.[4] In general, the southern parts of the province are colder than the north.

Owing to the Andes, they block most of the incoming frontal systems and as a result, most of the rainfall occurs in the western side of the Andes, in which precipitation rapidly decreases eastward.[4] Much of the province receives less than 200 millimetres (8 in) of precipitation a year while in the Andean region which is under more influence from the Pacific, it can receive more than 1,000 millimetres (39 in).[4] Precipitation mainly falls in the form of light rain with heavy rain and thunderstorms being rare, with these two only occurring during the summer.[4] In all parts of the province, more precipitation occurs in the winter than in the summer.[4]

The prevalent wind directions are from the west, southwest and northwest and together, these occur 60% of the time.[4] Northern parts of the province tend to have more northwest winds than the southern parts of the province. With few landmasses south of 46°S, the province is dominated by strong winds throughout the year. Summers are windier than winters.[4] The strongest winds are found in the Andean region while the weakest are found in the coastal areas.[4] With a mean wind speed of 10 metres per second (33 ft/s), the province is the windiest in Argentina.[4] Gusts can reach up to 200 kilometres per hour (120 mph) in some places.[4] 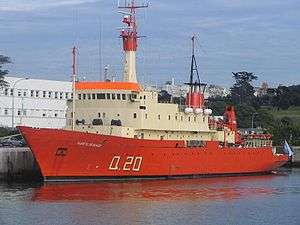 Its economy, with the possible exception of Neuquen's, is the country's least diversified, however. Fully half its output is accounted for by the extractive sector (petroleum, gas and mining), with an annual production of 4.5 million m3 of petroleum and 3 million m3 of gas, mainly in the Pico Truncado, Cañadón seco and Cerro Redondo extracting facilities. Cerro Negro mine by Gold Corp. has in recent years contributed to the growth of population of Santa Cruz through its Gold mining operations and subsidies to local public education and private sector.[7]

The coal production at Río Turbio, Argentina's only active coal mine, is of around one million m3 per year. Mining includes gold (Cerro Vanguardia Mine), clay, gypsum, salt and others.

The second most important productive activity is that associated with sheep. With 7 million heads, Santa Cruz is the second main producer of wool and meat after the Province of Chubut, most of which is designated for export. Sheep farming revived in 2002 with the devaluation of the peso and firmer global demand for wool (led by China and the EU). Still there is little investment in new abbatoirs (mainly in Rio Gallegos), and often there are phitosanitary restrictions to the export of sheep meat. Livestock also includes small numbers of cattle, and in lesser numbers pigs and horses.

Sea fishing, and its later industrialization at the fishing ports of Puerto Deseado, Puerto San Julián, Puerto Santa Cruz and Río Gallegos produces prawn, squid, hake and dozens of others. Most of the production is frozen and exported.

There is little agriculture due to the arid nature of the soil. There is a small timber industry fed by both forests and planted trees, of which the wood of the lenga is the most exploited. 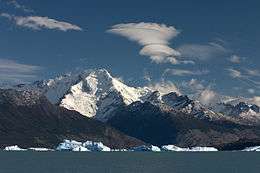 Santa Cruz's most visited destination is Los Glaciares National Park and a number of glaciers of which the Perito Moreno Glacier is the most famous. Nearby El Calafate has an airport that connects the area with Buenos Aires and Trelew.

Some 200 kilometres north of El Calafate is the village of El Chaltén at the feet of the Cerro Torre and Mount Fitz Roy. Still not very developed, El Chaltén serves as a hub for various trekking routes including walks on the Viedma Glacier. 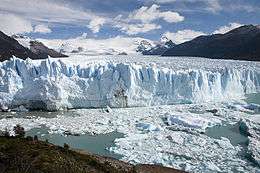 Perito Moreno Glacier, near El Calafate. Until recently, the only glacier of its type in the world that was still expanding.

600 kilometres further north of El Chaltén, by the dirt road Ruta 40, the Cueva de las Manos near the town of Perito Moreno allows the few tourists who venture to this point to see the prehistoric wall paintings in the caves near the Pinturas River.

Perito Moreno National Park and its lakes, north of Los Glaciares, are rarely visited. Besides trekking, other sports practised on the west side of the province are sport fishing, rafting and climbing.

In the east, the National Route 3 follows the Atlantic coastline, by which buses connect the coastal cities, and take passengers both south to Tierra del Fuego and north to Chubut Province and Buenos Aires. The most visited places are the cities of Río Gallegos, the Bosques Petrificados National Monument petrified forest, and the depression of Laguna del Carbón near Puerto San Julián. 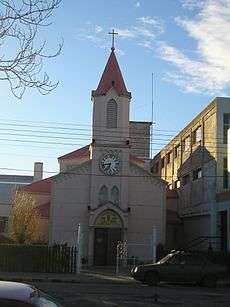 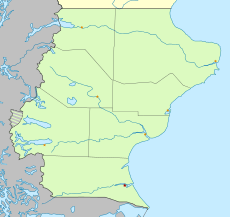 The departaments and the respective capitals.

The province is divided into the following 7 departments:

Boxing Club de Río Gallegos is the only side that competes in national leagues. The club currently plays in the Torneo Federal B, the regionalized fourth-tier in Argentine football league system. At the 2015 season it reached the second phase.