The province is divided into four departments, all of which are discontiguous with the Argentine mainland:

The province had been inhabited by indigenous people for more than 12,000 years, since they migrated south of the mainland. It was first discovered by a European in 1520 when spotted by Ferdinand Magellan. Even after Argentina achieved independence, this territory remained under indigenous control until the nation's campaign known as the Conquest of the Desert in the 1870s. After defeating most of the Indians in the desert part of Patagonia, Argentina organized this section in 1885 as a territory. European immigration followed due to a gold rush and rapid expansion of sheep farming on large ranches in the area. Tierra del Fuego is the most recent Argentine territory to gain provincial status, which occurred in 1990. 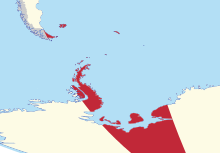 The effective extent of the province is the eastern part of the island of Tierra del Fuego, Isla de los Estados and adjacent islands.

However, Argentina has made a territorial claim over the two British overseas territories of the Falkland Islands and South Georgia and the South Sandwich Islands and over a segment of Antarctica, which overlaps with the British and Chilean claims on that continent. Although Argentina exercises no authority in those territories, other than in Argentine Antarctic bases, nevertheless those territories (known in Argentine Spanish as las Islas del Atlántico Sur and Antártida Argentina respectively) have been nominally included in the province since 1990. 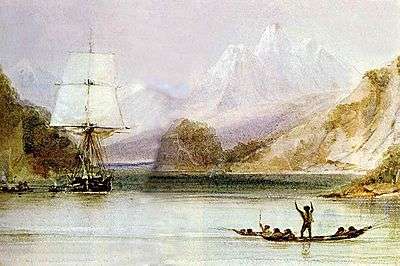 The youngest of the Argentine provinces was first inhabited around 12,000 years ago. When the first Europeans arrived, they encountered a population of about 10,000 indigenous people belonging to four tribes: Yámana, Alakaluf (now known by their autonym of Kawésqar), Selk'nam and Manek'enk (Haush).[2] Within fifty years of discovery, only about 350 natives remained due to high fatalities from the endemic diseases carried by Europeans, such as smallpox and measles, as the natives had no immunity to these new diseases.[3][4] In addition, in the late 19th century, ranchers and settlers committed genocide against the Selk'nam.[5] The provincial capital city is Ushuaia, from a native word meaning "bay towards the end".

The territory was first seen by Europeans in 1520 during Ferdinand Magellan's expedition. He named the area Land of Smokes (later changed to Land of Fire), as he saw what were probably the fires produced by the local Amerindian peoples for heat. Juan de Alderete in 1555 and later Pedro Sarmiento de Gamboa intended to found settlements in the area. The harsh weather and the constant attacks of British pirates, who took Sarmiento de Gamboa prisoner, frustrated their ambitions.

Spanish, Dutch, British and French explorers ventured on Tierra del Fuego island and the nearby seas. Gabriel de Castilla passed through before exploring the Antarctic islands. In the early 1830s, Commander Robert FitzRoy, and Charles Darwin explored this land and other parts of Patagonia via the HMS Beagle.

In 1828 Argentina established a penal colony at Puerto Luis on the Falkland Islands. In 1833 the British sent a naval task force to request that the Argentine representative of the islands, José María Pinedo, and Argentine forces leave the islands, and re-established their rule there. 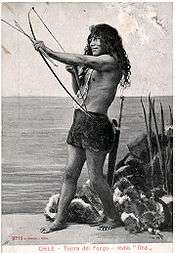 A member of the Selknam people, 1904. The Selk'nam, or Ona, who traditionally placed great value on amiability, were the island's most numerous native people until their numbers were reduced by disease and genocide in the 19th and 20th centuries.

In the 1880s the Argentine government took a more active interest in Tierra del Fuego. In 1881, the meridian 68°36'38 W was defined as the boundary between the Chilean and the Argentine portions of the island. In 1884 the Government of Tierra del Fuego was created, and a subprefecture was established at Ushuaia.

The southern part of the Beagle Channel was an issue of conflict between both states, which competed for control of three small islands, Picton, Lennox and Nueva. Finally in 1977, these were awarded to Chile by decision of the mediating British Crown, revised by Pope John Paul II and ratified by treaty in 1985.

When the crews of sailing-ships told of the notoriously dangerous voyage round the tip of South America, Tierra del Fuego became a byword in Europe for an inhospitable land, where life would be impossibly harsh for settlers. But, it is not the most sparsely populated province of Argentina. Its population density of 4.75/ km² is higher than five other provinces, due to various waves of immigration. 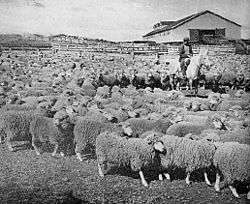 Local sheep ranch, 1942. Sheep, the most important part of the economy by the turn of the 20th century, have been eclipsed by the decline in the global wool market and the rise in petroleum extraction.

Gold fever started in Tierra del Fuego around 1883. Many Croatians from the Dalmatian coast arrived in search of gold. In addition, the gold rush inspired new technologies and innovations, such as the telegraph. Although by 1910 the gold had run out, most of the pioneers stayed. The inauspicious-looking northern plains proved ideal sheep-farming country, and vast ranches were developed. Croatian, Scottish, Basque, Italian, Galician and Chilean immigrants arrived to work on the estancias, with the hope of eventually buying their own land and stock.

The Amerindians suffered high fatalities from disease and the outright warfare waged by ranchers and bounty hunters; by 1920 their population on the island had dropped to only 200. News of the atrocities and genocide reached the Federal Congress in Buenos Aires. It sent aid and tried to help the Salesian mission, the only institution working in the island to protect the indigenous peoples.

With the creation of the Gobernación Marítima de Tierra del Fuego in 1943, construction of naval bases began in Ushuaia and Río Grande. An airport and other infrastructure were also built. These projects attracted immigrants from other countries as well as other parts of Argentina.

It was not until 1990 that the "National Territory of Tierra del Fuego, the Antarctic and the South Atlantic Islands" was declared a province. Its first governor was appointed two years later. 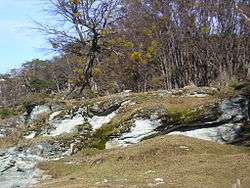 The province can be geographically divided into 3 distinct areas: the Tierra del Fuego islands, Argentine Antarctica, and the South Atlantic Islands.

There are low mountains and sandy beaches at the north of the island, ascending to the south. The north is somewhat similar to the steppe of Santa Cruz Province. In the middle of the island, the end of the Andes mountain system becomes flattened, and its highest peak, Mount Cornú, rises only 1,490 m (4,890 ft). There are a number of short rivers (the Grande, Moneta, Ona, Lasifashaj, etc.), and as a result of the low temperature there are many small glaciers that flow to the sea.

Due to its latitude, the island has a cold oceanic climate.[7] The influences from the surrounding ocean and the predominant winds from the west result in the climate being uniform throughout the province.[8] Mean annual temperatures are low, with winter temperatures averaging close to 0 °C (32 °F) and summer temperatures averaging around 10 °C (50 °F).[7][8] The strong westerly winds from the Pacific Ocean decrease the perception of the temperature (wind chill).[7] In the extreme south in the Beagle Channel which is surrounded by mountains rising above 100 m (330 ft), winds can exceed 100 km/h (62 mph).[7] The island averages around 700 mm (28 in) of precipitation per year which is fairly evenly distributed throughout the year with a slight maximum in Autumn.[8] Snowfall is abundant throughout the island.[8] Much of this island can be classified as within the Magellanic subpolar forests ecoregion.[9] 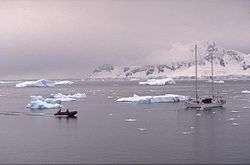 The part of Antarctica claimed by Argentina is formed by Palmer Land and the Weddell Sea, of which half remains frozen all year round. The highest peak of this section of the continent is Mt. Chiriguano, at 3,360 meters (11,020 ft). The weather is normally cold and windy.

Most of the islands of the Southern Atlantic have a cool, humid climate: for instance, the Año Nuevo and Isla de los Estados islands have a dense vegetation of low forests of lenga beech and antarctic beech.

Argentina lays claim to the Falkland Islands, as well as South Georgia and the South Sandwich Islands, regarding them as part of Tierra del Fuego Province. Argentina has no control over the islands, which are governed as British Overseas Territories.

The Falklands are covered in moorland, receive less precipitation than islands closer to the continent, and are constantly swept by strong winds. The South Orkney Islands, South Georgia and the South Sandwich Islands are colder than the others, because they are so far from continental land masses.

Tierra del Fuego has since the 1970s benefited from government subsidies to local industry and from its natural wealth. Its estimated 2006 output of US$2.6 billion gave the province a per capita income of US$25,719, the second highest in Argentina, behind Buenos Aires.[10]

Manufacturing, despite the province's remoteness, contributes about 20% to output owing partly to generous certain tax incentives to local industry, a policy Buenos Aires has pursued to encourage immigration to less populated areas. A number of sizable factories have opened on Tierra del Fuego Island to take advantage of the tax benefits legislated in 1972, mainly home appliance and electronics manufacturers.

Recently, in the city of Río Grande, many international and Argentine companies, most notably the Korean company Samsung and the Argentine company Teltron, have set up factories that produce high-definition televisions (HDTV), CD-ROM-related articles, and low-cost GSM cell phones, built mainly from Argentine components. 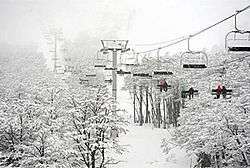 Cerro Castor is the most important ski resort in the province. 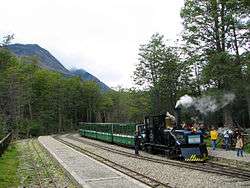 "Train to the End of the World". Operated by the province government, it is the world's southernmost active railway.

Sheep ranching is the leading source of the province's modest agricultural income (5% of output). It provides wool, mutton and hides throughout the province and the wider Argentine market, whose taste for these products has been growing strongly.

As in Patagonia to the north, petroleum and natural gas extraction are important to Tierra del Fuego's economy, generating over 20% of total output. Exploration efforts continue. The government of the Falkland Islands has issued exploration licenses within its waters. This competition has caused anger in Argentina. The activity has also intruded into some of the area's lucrative crab and shrimp fishing industry.

Tourism is gaining importance on Tierra del Fuego island. The region offers mountains, glaciers, forests, fast rivers, waterfalls, ski centres (the most important is Cerro Castor), and the sea, all within short distances.

The most visited destinations in Argentine Tierra del Fuego include Ushuaia, the Tierra del Fuego National Park and the Tren del Fin del Mundo, Fagnano Lake, the Museum of the End of the World, the Beagle Channel, the Les Eclaireurs lighthouse, the old jail, and South Staten Island.

The Argentine Antarctic started receiving tourists a short time ago. Tourists can see wildlife at the Argentine Marambio Base during the summer.

The Falkland Islands gained publicity as a result of the Falklands War. A modest number of tourists venture to the islands. Argentine nationals have been free to do so again since the 1989 restoration of diplomatic relations between the two former adversaries. 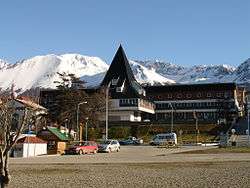 The province is divided into 4 departments (Spanish: departamentos), only the first two of which are under the effective control of Argentina: 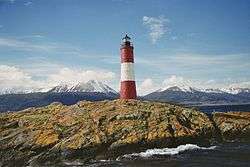 The Les Eclaireurs Lighthouse, on the Beagle Channel near Ushuaia.