The Śivaḷḷi Brahmins (Tulu: ಶಿವಳ್ಳಿ ಬ್ರಾಹ್ಮಣರು) are a Hindu community in Tulu Nadu. They are divided into two groups, the first of which follows the Dvaita philosophy founded by the Vaishnava saint Madhvacharya of Udupi are called Shivalli Madhwa Brahmins, and the second of which follow the Advaita Vedanta philosophy of Adi Shankara and are known as Shivalli Smartha Brahmins.[1]

Shivalli Brahmins are famous for Udupi hotels (vegetarian restaurants) known for serving typical south Indian dishes like idli, vada, dosa, shira and upma etc.[2] Shivalli Brahmins have a unique style of cooking, serving and eating meals. The meal is served on a plantain (banana) leaf and is usually eaten by hand, seated in a squatting position on the floor.[3] The meal is wholesome and elaborate in preparation, serving and eating. 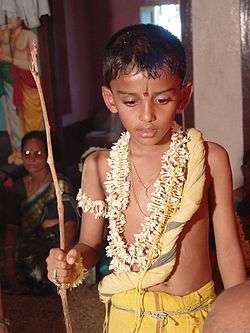 A young Shivalli Brahmin boy during his upanayana

Shivalli Brahmin males undergo the Upanayana when they turn seven years old to initiate them into Vedic studies.[4] It is also known as Brahmopadesham. The key ritual during the Upanayana is that of putting a sacred thread consisting of three cotton strands across the left shoulder of the boy. The initiate is called a dvija "twice-born" and is expected to perform the sandhyavandanam at least twice daily. Dvija has a special knot in it which is called as "Brahma Gant". Shivalli Madhwa Brahmins also undergo the Upakarma, where the sacred thread is changed and mudradharana is done. Mudradharana is a ritual where Vaishnavite symbols like the conch or the wheel are etched on bodies as a ritual of purification...[5] Currently, the prevalent practice is to paint the symbols using gopichandana paste. In old vedas it is mentioned that after upanayana he enters the stage of Brahmacharya ashram, leading a celibate and austere life of a student in his teacher’s home, eating from handouts given by the generous neighbors. It is equivalent to say he will undergo studies excluding all other aspects in modern days. When he has accomplished his studies of the Vedas, he enters the Grahastha ashram, a married man becoming head of his household. This dvija also called as "Janivara" is replaced with six cotton strands during the wedding.

Present day marriages of Shivalli Madhva Brahmins are a four-day ceremony, sometimes condensed to a single day due to the fast pace of today's life.[6] In the three-day ritual, the process of marriage starts with Naandi (literally meaning start). During Naandi, which takes place in the groom's and bride's homes separately, but at the same time, a ceremony is performed where the bride and groom have coconut oil and turmeric applied to them and are bathed in hot water followed by other rituals. Marriage (Madimae in Tulu) takes place at a temple, hall or auditorium followed by lunch. All the ceremonies are held as per horoscopes of bride and groom at a particular time called muhurtha. Generally the day after marriage, a ceremony called as the Bigara authana (a sort of reception) is held at the groom's place and consists of the Satyanarayana puja and other rituals followed by lunch. The bigara authana is an equivalent of the marriage reception. Fourth day is small function at the bride's house named as "Aarthakshathe." It is a ritual where shamiana (house decorative) will be removed concluding end of the ceremony. Bride and groom's Basinga (a wearing specially worn on wedding day) is tied to a pole in the bride's house and the newly married couple will start their new life with elders' (hiriyer) blessings.

While maintaining a vegetarian diet, Shivalli Madhwa Brahmins are expected to avoid eating the following vegetables and fruits:

Today, these restrictions are mostly followed only in the Ashta Mathas of Udupi and some temples of South Canara apart from orthodox Shivalli households. These vegetables and fruits are not considered to be origin of Parashurama kshetra and are tamasic foods. For example, tomatoes, potatoes, pineapple are from the New World and not native to India. Besides Shivalli Brahmins, a number of other Hindu communities across India avoid Onion and garlic for being tamasic.Shivalli Brahmins are not supposed to eat puffed rice, para-boiled rice.