The festival is celebrated on the eighth day (Ashtami) of the Krishna Paksha (dark fortnight) of the month of Shravana (August–September) in the Hindu calendar.[2]Rasa lila, dramatic enactments of the life of Krishna, are a special feature in regions of Mathura and Vrindavan, and regions following Vaishnavism in Manipur.[3] While the Rasa lila re-creates the flirtatious aspects of Krishna's youthful days, the Dahi Handi celebrate God's playful and mischievous side, where teams of young men form human towers to reach a high-hanging pot of curd and break it. This tradition, also known as uriadi, is a major event in Tamil Nadu on Gokulashtami. Krishna Janmashtami is followed by the festival Nandotsav, which celebrates the occasion when Nanda Baba distributed gifts to the community in honour of the birth.[4] 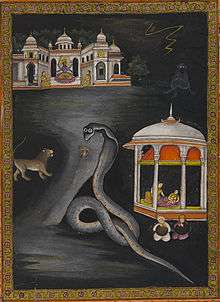 Krishna Carried Across the River

Krishna was the eighth son of Devaki and Vasudeva. Based on scriptural details and astrological calculations, the date of Krishna's birth, known as Janmashtami,[5] is 18 July 3228 BCE and he lived until 18 February 3102 BCE.[6][7] Krishna belonged to the Vrishni clan of Yadavas from Mathura,[8] and was the eighth son born to the princess Devaki and her husband Vasudeva.

Mathura (in present-day Mathura district, Uttar Pradesh) was the capital of the Yadavas, to which Krishna's parents Vasudeva and Devaki belonged. King Kansa, Devaki's brother,[9] had ascended the throne by imprisoning his father, King Ugrasena. Afraid of a prophecy that predicted his death at the hands of Devaki's eighth son, Kansa had the couple locked in a prison cell. After Kansa killed the first six children, and Devaki's apparent miscarriage of the seventh (which was actually a secret transfer of the infant to Rohini as Balarama), Krishna was born.

Following the birth, Vishnu ordered Vasudeva to take Krishna to Gokul to Nanda and Yashoda,[10] where he could live safely, away from his Uncle Kansa. Vasudeva took Krishna with him and crossed the Yamuna to reach Gokul. There, everyone was asleep; so he quietly kept him there and returned with Yashoda's daughter. Kansa, thinking her to be Devki's eight child, threw her on a stone. But she rose into the air and transformed into Yogmaya (who is Vishnu's helper) and warned Kansa about his death. Then, she disappeared.[10] Krishna grew up in Gokul with his brother, Balram. He then returned to Mathura and killed Kansa with the help of Balram.

Hindus celebrate Janmashtami by fasting, worshipping Krishna and staying up until midnight, and offer prayers at special time[11] when Krishna is believed to have been born. Images of Krishna's infancy are placed in swings and cradles in temples and homes. At midnight, devotees gather around for devotional songs, dance and exchange gifts. Some temples also conduct readings of the Hindu religious scripture Bhagavad Gita.[12] 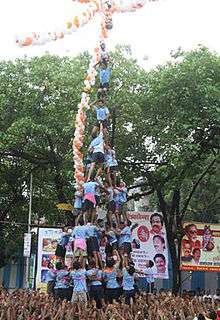 Forming a human tower to break the dahi handi in Dadar 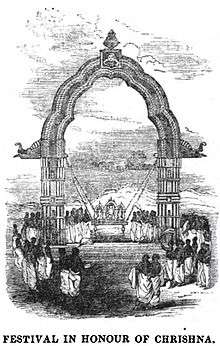 Janmaashtami or Gokulashtami, popularly known in Mumbai and Pune as Dahi Handi, is celebrated as an event which involves making a human pyramid and breaking an earthen pot (handi) filled with buttermilk (dahi), which is tied at a convenient height. The topmost person tries to break the handi by hitting it with a blunt object. When the handi breaks, the buttermilk is spilled over the entire group. This event is based on the legend of the child-god Krishna stealing butter. A participant in this festival is called a Govinda or Govinda pathak.[14]

Many such Govinda pathaks compete with each other, especially for the prize money. These groups are called mandals or handis and they go around the local areas, attempting to break as many pots as possible every August. The event, since the 2000s, has gathered a political flavour, and it is common for political parties and rich community groups to offer prizes amounting to lakhs of rupees.[15] Local celebrities and Bollywood actors also participate. Some of the popular handis are at Dadar, Lower Parel, Worli, Mazgaon, Lalbaug, Thane in Mumbai and Babu Genu, Mandai in Pune.[16] Cash and gifts are offered for Govinda troops to participate; for over 4,000 handis in Mumbai, 2,000 Govinda troops compete for the prizes.[15]

The coastal state of Goa(see:Gomanta Kingdom) has been associated with the Yadavas.Known as Ahstam in Goa,celebrated with great zeal on family level as well as community levels,especially in the temples of Devaki Krishna(perhaps the only temple dedicated to Devaki in India) and Naroa,the ancient town of Kadambas.

Places in Uttar Pradesh that are associated with Krishna's childhood, such as Mathura, Gokul and Vrindavan, attract visitors from all over India, who go there to participate in the festival celebrations.[17] People in the city of Dwarka in Gujarat – where Krishna is believed to have established his kingdom – celebrate the festival by visiting the Dwarkadhish temple. In Jammu, kite flying is an important part of the celebration on his day.[18]

In the eastern state of Odisha, in the region around Puri and in Nabadwip, West Bengal people celebrate Janmashtami by fasting and worship until midnight. Purana Pravachana from the Bhagavata Purana are recited from the 10th Skandha. This section deals with pastimes of Krishna. The next day is called "Nanda Utsav" or the joyous celebration of Krishna's foster parents Nanda and Yashoda. On this day, people break their fast and offer various cooked sweets during the early hours.

Janmaashtami– popularly known in Assam by the same name– is celebrated in Assam mostly at the homes, Namghars (Assamese: নামঘৰ) and the temples usually though Janmaashtami Nam, pujas and sharing food and Prasad.

Janmaashtami – popularly known in Manipur as Krishna Janma – is a significant festival celebrated at two temples in Imphal, the capital city of Manipur. The first festival is at the Govindaji temple, and the second is at the International Society for Krishna Consciousness temple. 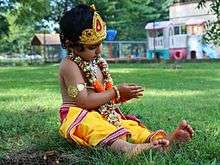 Gokulashtami or Gokula Ashtami (Janmashtami or Sri Krishna Jayanti) celebrates the birthday of Krishna. Gokulashtami is celebrated with great fervor in South India.

In Tamil Nadu, the people decorate the floor with kolams (decorative pattern drawn with rice batter). Geetha Govindam and other such devotional songs are sung in praise of Krishna. Then they draw the footprints of Krishna from the threshold of the house till the pooja room, which depicts the arrival of Krishna into the house.[19] A recitation of Bhagwadgita is also a popular practise. The offerings made to Krishna include fruits, betel and butter. Savories believed to be Krishna's favorites are prepared with great care. The most important of them are Seedai, Sweet Seedai, Verkadalai Urundai. The festival is celebrated in the evening as Krishna was born at midnight. Most people observe a strict fast on this day and eat only after the midnight puja. They also dress the youngest of male child in their family like Krishna and perform oonjal, or swing, which is rocked gently and prasadam offered to The is served first to them.

Andhra Pradesh State Recitation of shlokas and devotional songs are the characteristics of this festival. Another unique feature of this festival is that young boys are dress up as Krishna and they visit neighbors and friends. Different varieties of fruits and sweets are first offered to Krishna and after the puja, these sweets are distributed among the visitors. The people of Andhra Pradesh observe a fast too.Various kinds of sweets are made to offer Gokulnandan on this day. Eatables along with milk and curd are prepared to make offerings to Krishna. Joyful chanting of 's name takes place in quite a few temples of the state. The number of temples dedicated to Sri Krishna are few. The reason being that people have taken to worship him through paintings and not idols.

Popular south Indian temples dedicated for Krishna are Rajagopalaswami Temple in Mannargudi in the Tiruvarur district, Pandavadhoothar temple in Kanchivaram and Krishna temple at Guruvayur are dedicated to the memory of Vishnu's incarnation as Sri Krishna. Legend says that the Sree Krishna Idol installed in Guruvayur is from Dwarka which is believed to be submerged in the sea.

About eighty percent of the population of Nepal identify themselves as Hindus and celebrate Krishna Janmashtami. They observe Janmashtami by fasting until midnight. They chant slokas from the Bhagavad Gita and sing religious songs called bhajans. The temples of Krishna are decorated, and bhajans and kirtans are sung or played. The Krishna Mandir in Patan Durbar Square, Narayanhiti Krishna Mandir, and other temples of Krishna are the centres for festivities on Krishna Janmaasthimi. Numerous devotees flock to the ancient place in Durbar Square to keep vigil through the revered night of his birth. Observances include people sitting closely together, bodies rocking as women chant the many names of Krishna, such as Narayan, Narayan and Gopal, Gopal. Some sing hymns, others clap their hands while some others pray. Crowds of men and women edge their way slowly up narrow steps through the seated devotees to the temple's dark interior, to where the main idol stands. There they offer flowers, coins and food, and wait for a glimpse of the Krishna Janmashtami idol. After the temple priest gives them prasad, they make their way home.[20]

Janmashthami is celebrated by Pakistani Hindus in the Shri Swaminarayan Mandir in Karachi with the singing of bhajans and delivering of sermons on Krishna.[23]

At least a quarter of the population in Fiji practices Hinduism, and this holiday has been celebrated in Fiji since the first Indian indentured labourers landed there. Janmastami in Fiji is known as "Krishna Ashtami". Most Hindus in Fiji have ancestors that originated from Uttar Pradesh, Bihar, and Tamil Nadu, making this an especially important festival for them. Fiji's Janmastami celebrations are unique in that they last for eight days, leading up to the eighth day, the day Krishna was born. During these eight days, Hindus gather at homes and at temples with their 'mandalis,' or devotional groups at evenings and night, and recite the Bhagavat Purana, sing devotional songs for Krishna, and distribute Prasadam.[24]

The first ever elected government official in the world to issue proclamation for the celebration Janmashtami is Janet Napolitano, while she was the Governor of Arizona. The festival is also celebrated widely by Hindus in Caribbean in the countries of Guyana, Trinidad and Tobago, Jamaica and the former English colony Fiji as well as the former Dutch colony of Suriname. The Hindus in these countries originated from Tamil Nadu and Uttar Pradesh and are the descendants of indentured immigrants from Tamil Nadu, UP, Bihar, Bengal and Orissa.