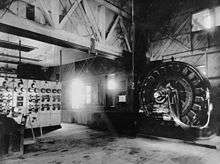 An 1895 hydroelectric plant near Telluride, Colorado.

Small hydro is the development of hydroelectric power on a scale serving a small community or industrial plant. The definition of a small hydro project varies, but a generating capacity of 1 to 20 megawatts (MW) is generally accepted, which aligns to the concept of distributed generation. The "small hydro" description may be stretched up to 50 MW in the United States, Canada and China.[1] In contrast many hydroelectric projects are of enormous size, such as the generating plant at the Hoover Dam of 2,074 MW or the vast multiple projects of the Tennessee Valley Authority.

Small hydro can be further subdivided into mini hydro, usually defined as 100 to 1,000 kilowatts (kW), and micro hydro which is 5 to 100 kW. Micro hydro is usually the application of hydroelectric power sized for smaller communities, single families or small enterprise. The smallest installations are pico hydro, below 5 kW.

Small hydro plants may be connected to conventional electrical distribution networks as a source of low-cost renewable energy. Alternatively, small hydro projects may be built in isolated areas that would be uneconomic to serve from a network, or in areas where there is no national electrical distribution network. Since small hydro projects usually have minimal reservoirs and civil construction work, they are seen as having a relatively low environmental impact compared to large hydro. This decreased environmental impact depends strongly on the balance between stream flow and power production. One tool that helps evaluate this issue is the Flow Duration Curve or FDC. The FDC is a Pareto curve of a stream's daily flow rate vs. frequency. Reductions of diversion help the river's ecosystem, but reduce the hydro system's Return on Investment (ROI). The hydro system designer and site developer must strike a balance to maintain both the health of the stream and the economics.

Plants with reservoir, i.e. small storage and small pumped-storage hydropower plants, can contribute to distributed energy storage and decentralized peak and balancing electricity. Such plants can be built to integrate at the regional level intermittent renewable energy sources.[2]

According to a report by REN21, during 2008 small hydro installations grew by 28% over year 2005 to raise the total world small hydro capacity to 85 gigawatts (GW). Over 70% of this was in China (with 65 GW), followed by Japan (3.5 GW), the United States (3 GW) and India (2 GW).[3] China plans to electrify a further 10,000 villages by 2010 under their China Village Electrification Program using renewable energy, including further investments in small hydro and photovoltaics.[3]

In the mountains and rain forests of British Columbia, Canada there are a great many sites suitable for hydro development. However environmental concerns towards large reservoirs has halted large dam construction since the late 1980s. The solution was to offer guaranteed contracts to independent companies who have built 100 run of the river projects under 50MW. Power production without reservoirs varies dramatically though the year, but allows large dams to retain water and average out capacity. In 2014 they produced 18,000 GWh from 4,500 MW of capacity.[8] 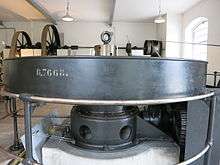 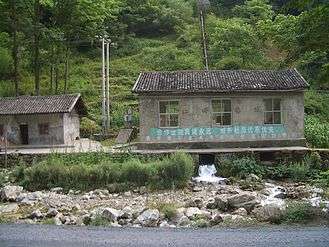 Hongping Power station, in Hongping Town, Shennongjia, has a design typical for small hydro stations in the western part of China's Hubei Province. Water comes from the mountain behind the station, through the black pipe seen in the photo

Hydroelectric power is the generation of electric power from the movement of water. A hydroelectric facility requires a dependable flow of water and a reasonable height of fall of water, called the head. In a typical installation, water is fed from a reservoir through a channel or pipe into a turbine. The pressure of the flowing water on the turbine blades causes the shaft to rotate. The rotating shaft is connected to an electrical generator which converts the motion of the shaft into electrical energy.

Small hydro is often developed using existing dams or through development of new dams whose primary purpose is river and lake water-level control, or irrigation. Occasionally old, abandoned hydro sites may be purchased and re-developed, sometimes salvaging substantial parts of the installation such as penstocks and turbines, or sometimes just re-using the water rights associated with an abandoned site. Either of these cost saving advantages can make the ROI for a small hydro site well worth the use of existing site infrastructure & water rights.

Many companies offer standardized turbine generator packages in the approximate size range of 200 kW to 10 MW. These "water to wire" packages simplify the planning and development of the site since one vendor looks after most of the equipment supply. Since non-recurring engineering costs are minimized and development cost is spread over multiple units, the cost of such systems is improved. While synchronous generators capable of isolated plant operation are often used, small hydro plants connected to an electrical grid system can use economical induction generators to further reduce installation cost and simplify control and operation.

Small hydro generating units commonly require a weir to form a headpond for diversion of inlet water to the turbine, unused water simply flows over the weir and there is no reservoir to store water for dry summers or frozen winters when generation may come to a halt. A preferred scenario is to have the inlet in an existing lake. Countries like India and China have policies in favor of small hydro, the regulatory process allows for building dams and reservoirs. In North America and Europe the regulatory process is too long and expensive to consider having a dam and a reservoir for a small project.

Other small hydro schemes may use tidal energy or propeller-type turbines immersed in flowing water to extract energy. Tidal schemes may require water storage or electrical energy storage to level out the intermittent (although exactly predictable) flow of power.

Small hydro projects usually have faster environmental and licensing procedures, and since the equipment is usually in serial production, standardized and simplified, and since the civil works construction is also reduced, small hydro projects may be developed very rapidly. The physically smaller size of equipment makes it easier to transport to remote areas without good road or rail access.