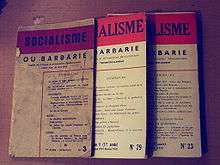 Socialisme ou Barbarie (French for Socialism or Barbarism) was a French-based radical libertarian socialist group of the post-World War II period whose name comes from a phrase Friedrich Engels used, which was cited by Rosa Luxemburg in the 1916 essay The Junius Pamphlet.[1] It existed from 1948 until 1967.[2] The animating personality was Cornelius Castoriadis, also known as Pierre Chaulieu or Paul Cardan.[3]

The group originated in the Trotskyist Fourth International, where Castoriadis and Claude Lefort constituted a Chaulieu–Montal Tendency in the French Parti Communiste Internationaliste in 1946. In 1948, they experienced their "final disenchantment with Trotskyism",[4] leading them to break away to form Socialisme ou Barbarie, whose journal began appearing in March 1949. Castoriadis later said of this period that "the main audience of the group and of the journal was formed by groups of the old, radical left: Bordigists, council communists, some anarchists and some offspring of the German 'left' of the 1920s[5]

They developed parallel to, and were in dialogue with, the Johnson–Forest Tendency, which developed as a body of ideas within American Trotskyist organisations. One faction of this group later formed Facing Reality. The early days also brought debate with Anton Pannekoek and an influx of ex-Bordigists into the group.

The group was composed of both intellectuals and workers, and agreed with the idea that the main enemies of society were the bureaucracies which governed modern capitalism. They documented and analysed the struggle against that bureaucracy in the group's journal. The thirteenth issue (January–March 1954), as an example, was devoted to the East German revolt of June 1953 and the strikes which erupted amongst several sectors of French workers that summer. Following from the belief that what the working class was addressing in their daily struggles was the real content of socialism, the intellectuals encouraged the workers in the group to report on every aspect of their working lives.

Socialisme ou Barbarie was critical of Leninism, rejecting the idea of a revolutionary party, and placing an emphasis on the importance of workers' councils. While some members left to form other groups, those remaining became more and more critical of Marxism over time. Jean Laplanche, one of the group's founding members, recalls the early days of the organization:

the atmosphere soon became impossible. Castoriadis exerted hegemony over the journal (he wrote the main articles) and his central idea in the mid-1950s was that a third world war was inevitable. This was very hard for people in the group to stand: to continue our lives, while thinking there would be an atomic explosion in a few years' time. It was an apocalyptic vision.[6]

The Hungarian Revolution and other events of the mid-1950s led to a further influx into the group. By this time, they were proposing the fundamental point as

the necessity for capitalism on the one hand to reduce workers to simple executors of tasks, and on the other hand, in its impossibility to continue functioning if it succeeds in so doing. Capitalism needs to achieve mutually incompatible objectives: the participation and the exclusion of the worker in production — as of all citizens in relation to politics.[7]

This became characterised as a distinction between the dirigeant and exécutant in French, usually translated as order-givers and order-takers. This perspective enabled the group to extend its understanding to the new forms of social conflict emerging outside the realm of production as such. That was also the case for the 1960-1961 Winter General Strike in Wallonia.

After the May 1958 crisis and an influx of new meeting attendees, disagreements on the organisational role of a political group led to the departure of some prominent members including Claude Lefort and Henri Simon to form Informations et Liaison Ouvrières.[8]

By 1960, the group had grown to around 100 members and had developed new international links, primarily in the emergence of a sister organisation in Britain called Solidarity.

In the early 1960s, disputes within the group around Castoriadis' increasing rejection of Marxism led to the departure of the group around the Pouvoir Ouvrier journal. The main Socialisme ou Barbarie journal continued publishing until a final edition in 1965, after which the group became dormant and announced its indefinite suspension in June 1967.[2] An attempt by Castoriadis to revive it during the May 1968 events failed.

The Situationist International was influenced by the group through Guy Debord who was a member of both. The Italian social movement of Autonomia were also influenced, but less directly.

Source: Andrea Gabler: Arbeitsanalyse und Selbstbestimmung. Zur Bedeutung und Aktualität von “Socialisme ou Barbarie“, Göttingen, 2006. This is a dissertation for the Doktor (Ph. D.) in social sciences from the Georg-August-Universität at Göttingen. Her many biographies are in Anhang C, pp. 210– 223.

No complete reprint of Socialisme ou barbarie exists, but the first ten issues of the magazine have been digitalized and there have been numerous reprints of SouB articles under the name of their authors, especially of Castoriadis' texts.