Recorded Sri Lankan immigration to Australia started in 1816, with the transportation of Drum Major William O'Dean (a Sri Lankan Malay) and his wife Eve (a Sinhalese). Early immigrants from Sri Lanka (at that time known as Ceylon) were generally (unlike the O'Deans) absorbed into the Aboriginal population. Other early references of Sri Lankan migration date back to the 1870s when authorities in South Australia sought out the possibility of importing labour from Ceylon.[4] The first Sinhalese from Sri Lanka arrived in 1870 to work in sugarcane plantations in Queensland. A community was believed to exist on Thursday Island in 1876. In 1882, a group of 500 left Colombo for Queensland, mostly in Mackay.[4]

Under the White Australia policy, immigration was negligible. It resumed after the Second World War primarily involving migration of Burghers, who fulfilled the then criteria that they should be of predominantly European ancestry and that their appearance should be European. By 1954 around 2000 Sri Lankans had been accepted. Sinhalese migration began in the 1960s but it was after the mid-1970s that large groups arrived, which also included Christians and Buddhists. During the 1970s intake restrictions loosened and Sri Lankan students undertook courses in Australia as part of the Colombo Plan prior to the formal dismantling of the White Australia policy, and after 1973 and from the early 1980s Sinhalese, Tamil and Moor migration resumed and increased.[4][5]

In The Australian People, S. Pinnawala writes that "social interaction between the various Sri Lankan migrant groups has often been influenced by factors originating in their home country".

In the 1980s, on a reflection of ethnic unrest in Sri Lanka, tensions between the Sinhalese and Tamil communities grew. However, in Pinnawala's opinion, more recently a Sri Lankan identity has developed among the various religious and ethnic migrants.

This has led to many new community organisations being established to promote Sri Lankan culture and traditions. There have also been strong links formed between Sinhalese Buddhists now living in Australia and their co-religionists from Burma, Thailand and Cambodia. Similar trends can be traced between Christian migrants from Sri Lanka who now live in Australia.[4] People born in Sri Lanka as a percentage of the population in Sydney divided geographically by postal area, as of the 2011 census. 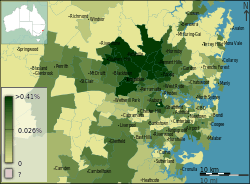 People with Sinhalese ancestry as a percentage of the population in Sydney divided geographically by postal area, as of the 2011 census

The rate of assimilation among Sri Lankan Australians is fairly high: among second-generation immigrants, the 'in-marriage' rate was extremely low – 5.6% for brides and 3.0% for grooms.

Tamils in Australia number 19,426 in the 2011 Census.[2] The majority of Tamils born in Sri Lanka came to Australia after 1983 when Sri Lanka faced ethnic turmoil and unrest (Black July). The Western suburbs of Sydney and the South Eastern Suburbs of Melbourne have a relatively high number of Tamil speaking people. Homebush in Sydney's west has the highest percentage with 11.5% of the population speaking Tamil at home. Numerous Tamil schools and Hindu Temples have been established in all main cities to cater for the growing Sri Lankan Tamil population.

In 2006, there were 29,055 Australians who spoke Sinhalese at home.[7] SBS Radio is available in Sinhalese,[8] and Melbourne television channel Channel 31 runs the Sri Lankan Morning show, which has sections in Sinhalese.[9]

Most Sinhalese in Australia are Theravada Buddhists, a small percentage of Sinhalese follow branches of Christianity. Sri Lankans have established many Theravada Buddhist temples across Victoria, New South Wales, Queensland and South Australia including the Dhamma Sarana Buddhist Temple of Melbourne's eastern suburbs.[10]

The majority of Sri Lankan Tamils are Hindu. The Sydney Murugan Temple was constructed for the needs of the high Tamil population in Western Sydney. Smaller temples have been built in the greater Sydney area. The Siva Vishnu Temple in Carrum Downs south east of Melbourne is also a temple built by Sri Lankan Tamils. The Sunshine Murugan Temple in western Melbourne also caters to the Tamil community. In other cities such as Adelaide, Brisbane, Perth, Townsville, Darwin, Canberra and Hobart, Hindu temples have also been built.