Sri Vikrama Rajasinha (1780 – January 30, 1832, born Kannasamy Nayaka) was the last of four Kings, to rule the last Sinhalese monarchy of the Kingdom of Kandy in Sri Lanka. The Nayak Kings were Tamil nominal Buddhists[1] who practiced Hinduism[2] and spoke Tamil.[3][4][5] The King was eventually deposed by the British under the terms of the Kandyan Convention, in 1815, ending over 2300 years of Sinhalese monarchy on the island. The island was incorporated into the British Empire, and Sri Vikrama Rajasinha was succeeded by George III, as monarch of British Ceylon.

Prior to his coronation in 1798, Sri Vikrama Rajasinha was known as Prince Kannasamy.[6] He was a member of the Madurai royal family and the nephew of Sri Rajadhi Rajasinha. He succeed his uncle as the King of Kandy in 1798 at the age of eighteen. 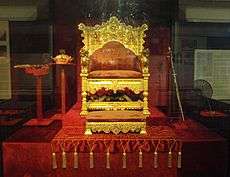 The Throne of Kandyan Kings.

There was a rival claimant to succeed Sri Rajadhi Rajasinha, the brother of Queen Upendrama, who had a stronger claim. However, Pilimatalauwa, the first Adigar (Prime Minister) chose Prince Kannasamy, reportedly with deep seated plans to usurp the throne to set up a dynasty of his own. Sri Vikrama Rajasinha was faced with numerous conspiracies to overthrow him and reigned through one of the most turbulent periods in Sri Lanka's history. 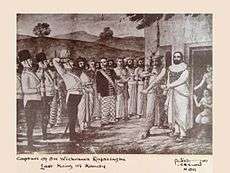 During his time, the British who had succeeded the Dutch in the Maritime Provinces had not interfered in the politics of the Kandy. But Pilimatalauwa, the first Adigar of the King, started covert operations with the British to provoke the King into acts of aggression, which would give the British an excuse to seize the Kingdom. The Adigar manipulated the King into beginning a military conflict with the British, who had gained a strong position in the coastal provinces. War was declared and on March 22, 1803 the British entered Kandy with no resistance, Sri Vikrama Rajasinha having fled. The adigar massacred the British garrison in Kandy in June and restored the King to the throne. Pilimitalava plotted to overthrow the King and seize the crown for himself, but his plot was discovered, and, having been pardoned on two previous occasions, he was executed.

The disgraced adigar was replaced by his nephew, Ehelepola, who soon came under suspicion of following his uncle in plotting the overthrow of Sri Vikrama Rajasinha. A rebellion instigated by Ehalepola was suppressed, after which he then fled to Colombo and joined the British. After failing to surrender (after 3 weeks of notice), the exasperated King dismissed Ehelepola, confiscated his lands, and ordered the imprisonment and execution of his wife and children. A propagandised account of the execution was widely circulated by sympathisers. 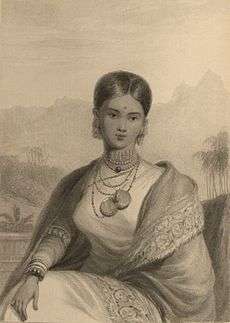 Ehelepola fled to British-controlled territory, where he persuaded the British that Sri Vikrama Rajasinha's tyranny deserved a military intervention. The pretext was provided by the seizure of a number of British merchants, who were detained on suspicion of spying and were tortured, killing several of them. An invasion was duly mounted and advanced to Kandy without resistance, reaching the city on February 10, 1815. On March 2, the Kingdom was ceded to the British under a treaty called the Kandyan Convention.

Regarding the King's reign, the historian Louis Edmund Blaze states that "He was not as ardent a patriot as his immediate successors; nor did he show those mental and moral qualities which enabled former Kings to hold their own against rebellion and invasion. To say he was cruel does not mean much, for cruel Kings and nobles were not rare in those days; and it is questionable whether all the cruel deeds attributed to Sri Vickrema Rajasinghe were of his own devising or done by his authority. It might be more fair to regard him as a weak tool in the hands of designing chiefs than as the monster of cruelty, which it is an idle fashion with some writers to call him. He did a lot to beautify his capital. The lake and the Octagon in Kandy have always been considered the work of the King."

On March 2, 1815 the Kingdom was ceded to the British and Sri Vikrama Rajasinha was deposed and taken as a royal prisoner by the British to Vellore Fort in southern India. He lived on a small allowance given to him with his two queens by the British Government. He died of dropsy on January 30, 1832 aged 52 years. 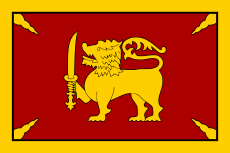 Flag of the Kingdom of Kandy.

The current Flag of Sri Lanka incorporates Sri Vikrama Rajasinha's Royal Standard. In September 1945 it was proposed in an address to the State Council that the flag be adopted as Sri Lanka's national flag:

"This House is of opinion that the Royal Standard of King Sri Vikrama Rajasinha depicting a yellow lion passant holding a sword in its right paw on a red background, which was removed to England after the Convention of 1815, should once again be adopted as the official flag of Free Lanka."

Kandy Lake, an artificial lake overlooking the palace in Kandy was commissioned by Sri Vikrama Rajasinha.

During Sri Vikrama Rajasinha's time as a royal prisoner in Vellore Fort he received a privy purse, which his descendants continued to receive from the Government of Ceylon until 1965. Muthu Mandapam is a memorial built around the tombstone of Sri Vikrama Rajasinha, the last south Indian origin ruler of Kandy.[7][8] Situated on the bank Palar River, it is just one km north of Vellore town.

During Sri Vikrama Rajasinha's reign, Tamil was used as one of the court languages in Kandy - a historical fact with implications for the present-day politics of Sri Lanka.[9]