Not to be confused with staff office. 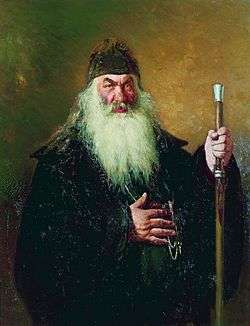 A staff of office is a staff, the carrying of which often denotes an official's position, a social rank or a degree of social prestige.

Apart from the ecclesiastical and ceremonial usages mentioned below, there are less formal usages. A gold- or silver-topped cane can express social standing (or dandyism). Teachers or prefects in schools traditionally carried less elaborate canes which marked their right (and potential threat) to administer canings, and military officers carry a residual threat of physical punishment in their swagger sticks. Orchestral conductors have in their batons symbols of authority as well as tools of their trade.

Church sidesmen bear sticks or rods or wands of office; bishops may use a crozier or crook.[1]

In the Eastern Orthodox Church and some of the Oriental Orthodox Churches an ecclesiastical walking stick is used by bishops,[2] archimandrites and hegumens (abbots) when walking outside. It is usually made of dark wood and is straight, rather than having a curved handle. The walking stick used by bishops and archimandrites is normally adorned with a silver grip at the top and a metal ferrule at the tip. The walking stick used by a hegumen or hegumenia (abbess) is normally of plain wood, unadorned.

The walking stick is not used in any liturgical context, except to the extent that when a bishop is formally received at the beginning of the service, he will carry it as he walks into the church. An altar server will usually take it from him when he enters the narthex and return it to him when he leaves at the end of the service.

Monarchs often have a sceptre signifying their office. There are also offices which take their titles from their staff, such as Black Rod, White Rod and the Tipstaff. Some corporate bodies use maces.