Dolby Digital is the name for audio compression technologies developed by Dolby Laboratories. It was originally named Dolby Stereo Digital until 1994. Except for Dolby TrueHD, the audio compression is lossy. The first use of Dolby Digital was to provide digital sound in cinemas from 35mm film prints. It is now also used for other applications such as TV broadcast, DVDs, Blu-ray Discs and game consoles.

Batman Returns was the first film to use Dolby Digital technology when it premiered in theaters in the summer of 1992.[1] Dolby Digital cinema soundtracks are optically recorded on a 35 mm release print using sequential data blocks placed between every perforation hole on the sound track side of the film. A constant bit rate of 320 kbit/s is used. A charge-coupled device (CCD) scanner in the image projector picks up a scanned video image of this area, and a processor correlates the image area and extracts the digital data as an AC-3 bitstream. The data is then decoded into a 5.1 channel audio source. All film prints with Dolby Digital data also have Dolby Stereo analogue soundtracks using Dolby SR noise reduction and such prints are known as Dolby SR-D prints. The analogue soundtrack provides a fall-back option in case of damage to the data area or failure of the digital decoding; it also provides compatibility with projectors not equipped with digital soundheads. Almost all current release cinema prints are of this type and may also include SDDS data and a timecode track to synchronize CD-ROMs carrying DTS soundtracks. 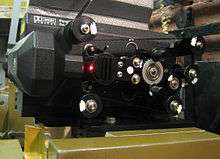 The simplest way of converting existing projectors is to add a so-called penthouse digital soundhead above the projector head. However, for new projectors it made sense to use dual analogue/digital soundheads in the normal optical soundhead position under the projector head. To allow for the dual-soundhead arrangement the data is recorded 26 frames ahead of the picture. If a penthouse soundhead is used, the data must be delayed in the processor for the required amount of time, around 2 seconds. This delay can be adjusted in steps of the time between perforations, (approximately 10.4 ms).

As of 2015, Dolby Digital in the cinema is being gradually replaced with Dolby Surround 7.1, a process that may take up to 2018 to complete.

Dolby Digital logo that is sometimes shown at the start of broadcasts, feature films, and video games

This format has different names: 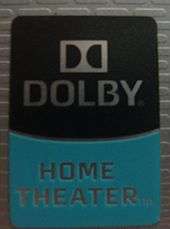 A Dolby home theater badge on a laptop

Dolby Digital Live is available in sound cards using various manufacturers' audio chipsets. The SoundStorm, used for the Xbox game console and certain nForce2 motherboards, used an early form of this technology. DDL is available on motherboards with codecs such as Realtek's ALC882D,[15] ALC888DD and ALC888H. Other examples include some C-Media PCI sound cards and Creative Labs' X-Fi and Z series sound cards, whose drivers have enabled support for DDL.

NVIDIA later decided to drop DDL support in their motherboards due to the cost of involved royalties, leaving an empty space in this regard in the sound cards market. Then in June 2005 came Auzentech, which with its X-Mystique PCI card, provided the first consumer sound card with Dolby Digital Live support.

Initially no Creative X-Fi based sound cards supported DDL (2005~2007) but a collaboration of Creative and Auzentech resulted in the development of the Auzentech Prelude, the first X-Fi card to support DDL. Originally planned to extend DDL support to all X-Fi based sound cards (except the 'Xtreme Audio' line which is incapable of DDL hardware implementation), the plan was dropped because Dolby licensing would have required a royalty payment for all X-Fi cards and, problematically, those already sold.[16] In 2008, Creative released the X-Fi Titanium series of sound cards which fully supports Dolby Digital Live while leaving all PCI versions of Creative X-Fi still lacking support for DDL.

Since September 2008, all Creative X-Fi based sound cards support DDL (except the 'Xtreme Audio' and its based line such as Prodigy 7.1e, which is incapable of DDL in hardware). X-Fi's case differs.

While they forgot about the plan, programmer Daniel Kawakami made a hot issue by applying Auzentech Prelude DDL module back to Creative X-Fi cards by disguising the hardware identity as Auzentech Prelude.[17]

Eventually Creative struck an agreement with Dolby Laboratories regarding the Dolby license royalty by arranging that the licensing cost be folded into the purchase price of the Creative X-Fi PCI cards rather than as a royalty paid by Creative themselves.[16] Based on the agreement, in September 2008 Creative began selling the Dolby Digital Live packs enabling Dolby Digital Live on Creative's X-Fi PCI series of sound cards. It can be purchased and downloaded from Creative. Subsequently Creative added their DTS Connect pack to the DDL pack at no added cost.[20]

E-AC-3 (Dolby Digital Plus) is an enhanced coding system based on the AC-3 codec. It offers increased bitrates (up to 6.144 Mbit/s), support for more audio channels (up to 13.1), and improved coding techniques (only at low data rates) to reduce compression artifacts, enabling lower data rates than those supported by AC-3 (e.g. 5.1-channel audio at 256 kbit/s). It is not backward compatible with existing AC-3 hardware, though E-AC-3 codecs generally are capable of transcoding to AC-3 for equipment connected via S/PDIF. E-AC-3 decoders can also decode AC-3 bitstreams. The fourth generation Apple TV supports E-AC-3.[21] The discontinued HD DVD system directly supported E-AC-3. Blu-ray Disc offers E-AC-3 as an option to graft added channels onto an otherwise 5.1 AC-3 stream, as well as for delivery of secondary audio content (e.g. director's commentary) that is intended to be mixed with the primary audio soundtrack in the Blu-ray Disc player.

Dolby TrueHD, developed by Dolby Laboratories, is an advanced lossless audio codec based on Meridian Lossless Packing. Support for the codec was mandatory for HD DVD and is optional for Blu-ray Disc hardware. Dolby TrueHD supports 24-bit, 96 kHz audio channels at up to 18 Mbit/s over 14 channels (HD DVD and Blu-ray Disc standards currently limit the maximum number of audio channels to eight). It supports metadata, including dialog normalization and Dynamic Range Control.

Although commonly associated with the 5.1 channel configuration, Dolby Digital allows a number of different channel selections. The options are:

Many Dolby Digital decoders are equipped with downmixing to distribute encoded channels to speakers. This includes such functions as playing surround information through the front speakers if surround speakers are unavailable, and distributing the center channel to left and right if no center speaker is available. When outputting to separate equipment over a 2-channel connection, a Dolby Digital decoder can optionally encode the output using Dolby Surround to preserve surround information.

Dolby Digital audio is used on DVD-Video and other purely digital media, like home cinema. In this format, the AC-3 bitstream is interleaved with the video and control bitstreams.

The system is used in bandwidth-limited applications other than DVD-Video, such as digital TV. The AC-3 standard allows a maximum coded bit rate of 640 kbit/s. 35mm film prints use a fixed rate of 320 kbit/s, which is the same as the maximum bit rate for 2-channel MP3. DVD-Video discs are limited to 448 kbit/s, although many players can successfully play higher-rate bitstreams (which are non-compliant with the DVD specification). HD DVD limits AC-3 to 448 kbit/s. ATSC and digital cable standards limit AC-3 to 448 kbit/s. Blu-ray Disc, the PlayStation 3 and the Xbox game console can output an AC-3 signal at a full 640 kbit/s. Some Sony PlayStation 2 console games are able to output AC-3 standard audio as well, primarily during pre-rendered cutscenes.

Dolby is part of a group of organizations involved in the development of AAC (Advanced Audio Coding), part of MPEG specifications, and considered the successor to MP3.

Dolby Digital Plus (DD-Plus) and TrueHD are supported in HD DVD, as mandatory codecs, and in Blu-ray Disc, as optional codecs.

The data layout of AC-3 is described by simplified "C-like" language in official specifications. An AC-3 stream is a series of frames; The frame size code is used along with the sample rate code to determine the number of (2-byte) words before the next syncword. Channel blocks can be either long, in which case the entire block is processed as single modified discrete cosine transform or short, in which case two half length transforms are performed on the block. Below is a simplified AC-3 header. A detailed description is in the ATSC "Digital Audio Compression (AC-3) (E-AC-3) Standard", section 5.4.

A free ATSC A/52 stream decoder, liba52, is available under the GPL license.

Audio codec AC3 is covered by patents. Patents are used to ask to pay a commercial license to publish an application that decodes AC3. This leads some audio app developers to ban AC3 from their apps, although the open source VLC media player supports AC-3 audio without having paid for any kind of patent license.[22]