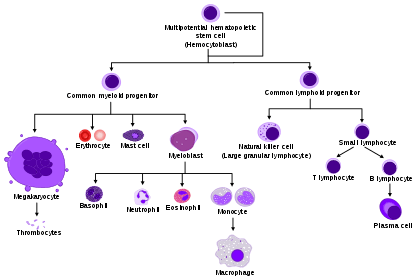 Haematopoiesis (from Greek αἷμα, "blood" and ποιεῖν "to make"; also hematopoiesis in American English; sometimes also haemopoiesis or hemopoiesis) is the formation of blood cellular components. All cellular blood components are derived from haematopoietic stem cells.[1] In a healthy adult person, approximately 1011–1012 new blood cells are produced daily in order to maintain steady state levels in the peripheral circulation.[2][3] 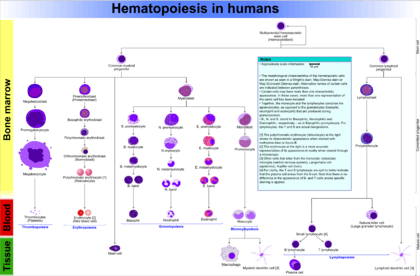 Haematopoietic stem cells (HSCs) reside in the medulla of the bone (bone marrow) and have the unique ability to give rise to all of the different mature blood cell types and tissues.[1] HSCs are self-renewing cells: when they proliferate, at least some of their daughter cells remain as HSCs, so the pool of stem cells is not depleted.This phenomenon is called asymmetric division.[4] The other daughters of HSCs (myeloid and lymphoid progenitor cells) can follow any of the other differentiation pathways that lead to the production of one or more specific types of blood cell, but cannot renew themselves. The pool of progenitors is heterogeneous and can be divided into two groups; long-term self-renewing HSC and only transiently self-renewing HSC, also called short-terms.[5] This is one of the main vital processes in the body.

All blood cells are divided into three lineages.[6]

Sites of haematopoesis (human) in pre- and postnatal periods

In developing embryos, blood formation occurs in aggregates of blood cells in the yolk sac, called blood islands. As development progresses, blood formation occurs in the spleen, liver and lymph nodes. When bone marrow develops, it eventually assumes the task of forming most of the blood cells for the entire organism.[1] However, maturation, activation, and some proliferation of lymphoid cells occurs in the spleen, thymus, and lymph nodes. In children, haematopoiesis occurs in the marrow of the long bones such as the femur and tibia. In adults, it occurs mainly in the pelvis, cranium, vertebrae, and sternum.[7]

In some cases, the liver, thymus, and spleen may resume their haematopoietic function, if necessary. This is called extramedullary haematopoiesis. It may cause these organs to increase in size substantially. During fetal development, since bones and thus the bone marrow develop later, the liver functions as the main haematopoetic organ. Therefore, the liver is enlarged during development.[8]

In some vertebrates, haematopoiesis can occur wherever there is a loose stroma of connective tissue and slow blood supply, such as the gut, spleen or kidney.[9]

As a stem cell matures it undergoes changes in gene expression that limit the cell types that it can become and moves it closer to a specific cell type (cellular differentiation). These changes can often be tracked by monitoring the presence of proteins on the surface of the cell. Each successive change moves the cell closer to the final cell type and further limits its potential to become a different cell type.

Two models for hematopoiesis have been proposed: determinism and stochastic theory.[10] For the stem cells and other undifferentiated blood cells in the bone marrow, the determination is generally explained by the determinism theory of haematopoiesis, saying that colony stimulating factors and other factors of the haematopoietic microenvironment determine the cells to follow a certain path of cell differentiation.[1] This is the classical way of describing haematopoiesis. In stochastic theory, undifferentiated blood cells differentiate to specific cell types by randomness. This theory has been supported by experiments showing that within a population of mouse haematopoietic progenitor cells, underlying stochastic variability in the distribution of Sca-1, a stem cell factor, subdivides the population into groups exhibiting variable rates of cellular differentiation. For example, under the influence of erythropoietin (an erythrocyte-differentiation factor), a subpopulation of cells (as defined by the levels of Sca-1) differentiated into erythrocytes at a sevenfold higher rate than the rest of the population.[11] Furthermore, it was shown that if allowed to grow, this subpopulation re-established the original subpopulation of cells, supporting the theory that this is a stochastic, reversible process. Another level at which stochasticity may be important is in the process of apoptosis and self-renewal. In this case, the haematopoietic microenvironment prevails upon some of the cells to survive and some, on the other hand, to perform apoptosis and die.[1] By regulating this balance between different cell types, the bone marrow can alter the quantity of different cells to ultimately be produced.[12] 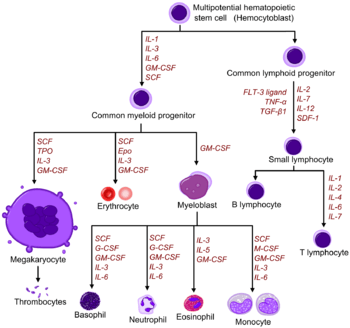 Red and white blood cell production is regulated with great precision in healthy humans, and the production of leukocytes is rapidly increased during infection. The proliferation and self-renewal of these cells depend on growth factors. One of the key players in self-renewal and development of haematopoietic cells is stem cell factor (SCF),[15] which binds to the c-kit receptor on the HSC. Absence of SCF is lethal. There are other important glycoprotein growth factors which regulate the proliferation and maturation, such as interleukins IL-2, IL-3, IL-6, IL-7. Other factors, termed colony-stimulating factors (CSFs), specifically stimulate the production of committed cells. Three CSFs are granulocyte-macrophage CSF (GM-CSF), granulocyte CSF (G-CSF) and macrophage CSF (M-CSF).[16] These stimulate granulocyte formation and are active on either progenitor cells or end product cells.

Growth factors initiate signal transduction pathways, which lead to activation of transcription factors. Growth factors elicit different outcomes depending on the combination of factors and the cell's stage of differentiation. For example, long-term expression of PU.1 results in myeloid commitment, and short-term induction of PU.1 activity leads to the formation of immature eosinophils.[18] Recently, it was reported that transcription factors such as NF-κB can be regulated by microRNAs (e.g., miR-125b) in haematopoiesis.[19]

Other transcription factors include Ikaros[22] (B cell development), and Gfi1[23] (promotes Th2 development and inhibits Th1) or IRF8[24] (basophils and mast cells). Significantly, certain factors elicit different responses at different stages in the haematopoiesis. For example, CEBPα in neutrophil development or PU.1 in monocytes and dendritic cell development. It is important to note that processes are not unidirectional: differentiated cells may regain attributes of progenitor cells.

An example is PAX5 factor, which is important in B cell development and associated with lymphomas.[25] Surprisingly, pax5 conditional knock out mice allowed peripheral mature B cells to de-differentiate to early bone marrow progenitors. These findings show that transcription factors act as caretakers of differentiation level and not only as initiators.[26]

Mutations in transcription factors are tightly connected to blood cancers, as acute myeloid leukaemia (AML) or acute lymphoblastic leukemia (ALL). For example, Ikaros is known to be regulator of numerous biological events. Mice with no Ikaros lack B cells, Natural killer and T cells.[27] Ikaros has six zinc fingers domains, four are conserved DNA-binding domain and two are for dimerization.[28] Very important finding is, that different zinc fingers are involved in binding to different place in DNA and this is the reason for pleiotropic effect of Ikaros and different involvement in cancer, but mainly are mutations associated with BCR-Abl patients and it is bad prognostic marker.[29]

For a decade now, the evidence is growing that HSC maturation follows a myeloid-based model instead of the 'classical' schoolbook dichotomy model. In the latter model, the HSC first generates a common myeloid-erythroid progenitor (CMEP) and a common lymphoid progenitor (CLP). The CLP produces only T or B cells. The myeloid-based model postulates that HSCs first diverge into the CMEP and a common myelo-lymphoid progenitor (CMLP), which generates T and B cell progenitors through a bipotential myeloid-T progenitor and a myeloid-B progenitor stage. The main difference is that in this new model, all erythroid, T and B lineage branches retain the potential to generate myeloid cells (even after the segregation of T and B cell lineages). The model proposes the idea of erythroid, T and B cells as specialized types of a prototypic myeloid HSC. Read more in Kawamoto et al. 2010.[30]