Sumy was founded in 1652 at the bank of the Psel River (a left tributary of the Dnieper) as a Cossack fortress. It was intended to protect Sloboda Ukraine from the Crimean Tatar attacks. After their attacks ceased and the territory was incorporated into the Russian Empire, Sumy evolved into an important economical centre, mainly focusing on sugar industry.

During the Revolution of 1905, Sumy was one of several areas which became famous throughout Russia for in effect having established an independent peasant republic; the Sumy Republic was established by a peasant union.[4]

The city used to be divided into two urban raions (districts), Zarichny and Kovpakovsky, and 13 micro-raions. The first were dissolved in 2006.[5]

The majority of residents are Christians (Eastern Orthodox, Roman Catholics and Protestant or Evangelical Christians). There is also a Jewish minority.

From the beginning of the twentieth century, Sumy was the center of Roman Catholicism in the northeastern Ukraine. The Blessed Virgin Mary Annunciation Church was established in the city in 1901 and consecrated in 1911, but closed by governmental authorities two decades later; the churchhouse was thereafter used for non-religious purposes (e.g., it was used as a gym for Oleksandrivska Gymnasia) until its restoration as a Roman Catholic parish in May 1994, after the disintegration of the Soviet Union. It was reconsecrated in the Spring of 1998.

The Sumy Regional Art Museum was opened in 1920. It was started from nationalized private collections of the town and district. Paintings of Taras Shevchenko, Vladimir Borovikovsky, I. Shyskin, Arkhip Kuindzhi and Tetyana Yablonska are on display, including a Dutch landscape by a painter of Jan van Goyen's circle. Today the museum is one of the most outstanding art centres which contains unique paintings and works of applied art. The building of the early 20th century originally belonged to the State Bank.

The Museum of Local Lore was opened in 1920. In the years of fascist occupation the most important items of its collections were lost. Today it contains unique collections covering archeology and natural history of the Sumy region. It is located in the building of the 19th century which originally was the seat of the district government. In 1905 it was given to the printing house and publishing house of the first Sumy newspapers. In different years the building was visited by A. Kuprin and V. Korolenko, the famous Russian writers.

The Chekhov Museum, located in Chekhov street is an architectural complex representing Lintvarev’s country estate of the 18th and 19th centuries. In 1888 and 1889 a great writer and dramatist Anton Chekhov was dreaming to settle in Luka forever but his dream did not come true. “Abbacia and the Adriatic Sea are wonderful, but Luka and Psiol are better” – he wrote in his letter from Italy to his friends in Sumy in 1894. This is also a place where Anton Chekhov's brother, Nikolai Chekhov, died in 1889.

The Museum of Banking history in the Sumy oblast and the History of Ukrainian Money was founded in 2006 to commemorate the 10th anniversary of the Ukrainian Academy of Banking on the basis of a unique collection of Ukrainian bonds – the paper money out of circulation, which were given to the academy by the National Bank of Ukraine. The exposition of the bonds is arranged in the thematic-chronological order - from the first appearance of money to the present day. In addition to the numerous historical documents, photographs, metal money (coins, souvenir bars), and commemorative medals of the National Bank of Ukraine, there is an exhibition presenting technical appliances used in the banking industry in the late 20th century. 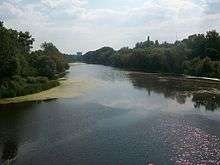 Sumy is located in the northeastern part of Ukraine. So its weather is similar to that in Kharkov. Sumy's climate is a humid continental one: cold and snowy winters, and hot summers. The seasonal average temperatures are not too cold in winter, not too hot in summer: −6.9 °C (19.6 °F) in January, and 20.3 °C (68.5 °F) in July. The average rainfall totals 513 mm (20 in) per year, with the most in June and July.

Sumy is twinned with: