Syria Palaestina was a Roman province between 135 and about 390.[1] It was established by the merger of Roman Syria and Roman Judaea, following the defeat of the Bar Kokhba Revolt in AD 135. Shortly after 193, the northern regions were split off as Syria Coele in the north and Phoenice in the south, and the province Syria Palaestina was reduced to Judea. The earliest numismatic evidence for the name Syria Palaestina comes from the period of emperor Marcus Aurelius.

Syria was an early Roman province, annexed to the Roman Republic in 64 BC by Pompey in the Third Mithridatic War, following the defeat of Armenian King Tigranes the Great.[2] Following the partition of the Herodian Kingdom into tetrarchies in 6 AD, it was gradually absorbed into Roman provinces, with Roman Syria annexing Iturea and Trachonitis.

The Roman province of Judea incorporated the regions of Judea, Samaria, and Idumea, and extended over parts of the former regions of the Hasmonean and Herodian kingdoms of Israel. It was named after Herod Archelaus's Tetrarchy of Judea, but the Roman province encompassed a much larger territory.

The capital of Roman Syria was established in Antioch from the very beginning of Roman rule, while the capital of the Judaea province was shifted to Caesarea Maritima, which, according to historian H. H. Ben-Sasson, had been the "administrative capital" of the region beginning in 6 AD.[3]

Judea province was the scene of unrest at its founding in 6 AD during the Census of Quirinius and several wars were fought in its history, known as the Jewish-Roman wars. The Temple was destroyed in 70 as part of the Great Jewish Revolt resulting in the institution of the Fiscus Judaicus. The Provinces of Judaea and Syria were key scenes of an increasing conflict between Judaean and Hellenistic population, which exploded into full scale Jewish-Roman Wars, beginning with the Great Jewish Revolt of 66–70. Disturbances followed throughout the region during the Kitos War in 117–118. Between 132–135, Simon Bar Kokhba led a revolt against the Roman Empire, controlling parts of Judea but seemingly not Jerusalem, for three years. As a result, Hadrian sent Sextus Julius Severus to the region, who brutally crushed the revolt. Shortly before or after the Bar Kokhba's revolt (132–135), the Roman Emperor Hadrian changed the name of the Judea province and merged it with Roman Syria to form Syria Palaestina, while Jerusalem was renamed to Aelia Capitolina, which certain scholars conclude was done in an attempt to remove the relationship of the Jewish people to the region.[4][5][6]

After crushing the Bar Kokhba revolt, the Roman Emperor Hadrian applied the name Syria Palestina to the entire region, that had formerly included Judea province. Hadrian probably chose a name that revived the ancient name of Philistia (Palestine), combining it with that of the neighboring province of Syria, in an attempt to suppress Jewish connection to the land, although the actual Philistines from which the name derives had disappeared from history during the Neo-Assyrian Empire (911-605 BC).[4][7][8] The city of Aelia Capitolina was built by the emperor Hadrian on the ruins of Jerusalem. The capital of the enlarged province remained in Antiochia. 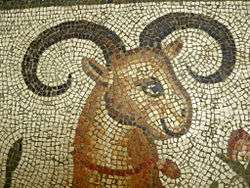 In 193, the province of Syria-Coele was split from Syria Palaestina. In the 3rd century, Syrians even reached for imperial power, with the Severan dynasty. Syria was of crucial strategic importance during the Crisis of the Third Century.

Conflict with Sassanids and emergence of the Palmyrene Empire

Beginning in 212, Palmyra's trade diminished as the Sassanids occupied the mouth of the Tigris and the Euphrates. In 232, the Syrian Legion rebelled against the Roman Empire, but the uprising went unsuccessful.

Septimius Odaenathus, a Prince of the Aramean state of Palmyra, was appointed by Valerian as the governor of the province of Syria Palaestina. After Valerian was captured by the Sassanids in 260, and died in captivity in Bishapur, Odaenathus campaigned as far as Ctesiphon (near modern-day Baghdad) for revenge, invading the city twice. When Odaenathus was assassinated by his nephew Maconius, his wife Septimia Zenobia took power, ruling Palmyra on behalf of her son, Vabalathus. 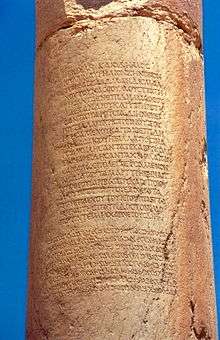 Zenobia rebelled against Roman authority with the help of Cassius Longinus and took over Bosra and lands as far to the west as Egypt, establishing the short-lived Palmyrene Empire. Next, she took Antioch and large sections of Asia Minor to the north. In 272, the Roman Emperor Aurelian finally restored Roman control and Palmyra was besieged and sacked, never to recover her former glory. Aurelian captured Zenobia, bringing her back to Rome. He paraded her in golden chains in the presence of the senator Marcellus Petrus Nutenus, but allowed her to retire to a villa in Tibur, where she took an active part in society for years. A legionary fortress was established in Palmyra and although no longer an important trade center, it nevertheless remained an important junction of Roman roads in the Syrian desert.[9]

Diocletian built the Camp of Diocletian in the city of Palmyra to harbor even more legions and walled it in to try and save it from the Sassanid threat. The Byzantine period following the Roman Empire only resulted in the building of a few churches; much of the city went to ruin.

In c. 390, Syria Palaestina was reorganised into the several administrative units: Palaestina Prima, Palaestina Secunda, and Palaestina Tertia (in the 6th century),[10] Syria Prima and Phoenice and Phoenice Lebanensis. All were included within the larger Eastern Roman (Byzantine) Diocese of the East, together with the provinces of Isauria, Cilicia, Cyprus (until 536), Euphratensis, Mesopotamia, Osroene and Arabia Petraea.

Palaestina Prima consisted of Judea, Samaria, the Paralia, and Peraea with the governor residing in Caesarea. Palaestina Secunda consisted of the Galilee, the lower Jezreel Valley, the regions east of Galilee, and the western part of the former Decapolis with the seat of government at Scythopolis. Palaestina Tertia included the Negev, southern Transjordan part of Arabia—and most of Sinai with Petra, as the usual residence of the governor. Palestina Tertia was also known as Palaestina Salutaris.[11]

A number of events with far-reaching consequences took place, including religious schisms, such as Christianity branching off from Judaism.

The practicing population of the Mosaic faith at the time included the Jews, Samaritans, Arameans, Nabateans and Edomites. Among the Jews and Edomeans, the Jewish–Roman Wars created a crisis of religion, out of which the Rabbinic Judaism emerged.

Following the Jewish–Roman Wars, many Jews left the country altogether for the Diaspora communities, and large numbers of prisoners of war were sold as slaves throughout the Empire. This changed the perception of Jerusalem as the center of faith and autonomous Jewish communities shifted from centralized religious authority into more dispersed one.

After the Jewish–Roman wars (66–135), which Epiphanius believed the Cenacle survived,[12] the significance of Jerusalem to Christians entered a period of decline, Jerusalem having been temporarily converted to the pagan Aelia Capitolina, but interest resumed again with the pilgrimage of Helena (the mother of Constantine the Great) to the Holy Land c. 326–28.

The Romans destroyed the Jewish community of the Mother Church in Jerusalem, which had existed since the time of Jesus.[15] Traditionally it is believed the Jerusalem Christians waited out the Jewish–Roman wars in Pella in the Decapolis.

The line of Jewish bishops in Jerusalem, which is claimed to have started with Jesus's brother James the Righteous as its first bishop, ceased to exist, within the Empire. Hans Kung in "Islam :Past Present and Future", suggests that the Jewish Christians sought refuge in Arabia and he quotes with approval Clemen et al.:[16]

"This produces the paradox of truly historic significance that while Jewish Christianity was swallowed up in the Christian church, it preserved itself in Islam".

Christianity was practiced in secret and the Hellenization of Palaestina continued under Septimius Severus (193–211 AD).[13]

As a large province, the territory of Syria-Palaestina comprised the Levant and the western part of Mesopotamia. In Northern Levant, the mixed pagan population of Phoenicians, Greeks and Romans formed the majority, alongside later arriving migrant Ismaelite Arab societies of Itureans and later also Qahtanite Ghassanids, who migrated to the area of Golantis in 4th century from what is today Yemen.

Indigenous Assyrians were still populating western Mesopotamia and indeed Mesopotamia as a whole, while nomad Arameans, Nabateans and Bedouins, were thriving in the south Syrian Desert. In Southern Levant, until about 200 AD and despite the genocide of Jewish-Roman Wars, Jews had formed a majority of the population.[17] Due to the decline of Jewish population, Samaritans and Greco-Romans became the dominant societies in this region by the end of the 2nd century.

By the beginning of the medieval Roman (Byzantine) period (disestablishment of Syria-Palaestina), the Jews had become a minority and were living alongside Samaritans, pagan Greco-Syriacs and a large Syriac Christian community.[18] Other opinions however, put the majority population of southern Levant on Samaritans or Christian Byzantines.