This article is about the geographic region. For the city, see Samaria (ancient city). For other uses, see Samaria (disambiguation). 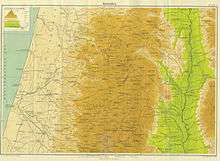 Samaria, as depicted in 1894 by George Adam Smith 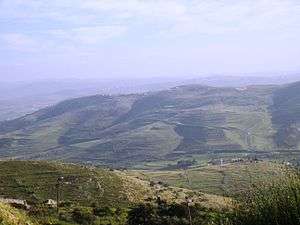 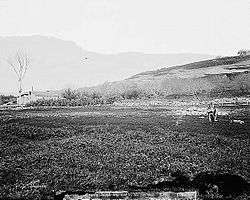 Site of Dothan, where according to the Book of Genesis, Joseph was sold by his brethren

Samaria (/sə.ˈmɛər.i.ə/;[1] Hebrew: שֹׁמְרוֹן‎‎, Standard Šomron, Tiberian Šōmərôn; Arabic: السامرة‎‎, as-Sāmirah – also known as جبال نابلس, Jibāl Nāblus) is a name for the mountainous, central region of the ancient Eastern Mediterranean,[2] based on the borders of the biblical Northern Kingdom of Israel and especially the Israelite tribes of Ephraim and Manasseh. The name "Samaria" is derived from the ancient city of Samaria, the capital of the Kingdom of Israel (Samaria).[3][4][5] 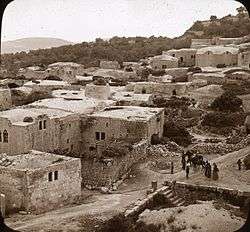 According to the Hebrew Bible, the Hebrew name "Shomron" is derived from the individual [or clan] Shemer, from whom King Omri purchased the site for his new capital city (1 Kings 16:24).[9] In modern times, Samaria was one of six administrative districts of the Mandatory Palestine.[10] Following the occupation of the West Bank by Israel in 1967, the Israeli right began to refer to the territories by their biblical names and argued for their usage on historical, religious, nationalist and security grounds.[8][11]

The fact that the mountain was called Shomeron when Omri bought it may indicate that an earlier etymology of the name may be "watch mountain". In the earlier cuneiform inscriptions, Samaria is designated under the name of "Bet Ḥumri" ("the house of Omri"); but in those of Tiglath-Pileser III and later it is called Samirin, after its Aramaic name.[12]

To the north, Samaria is bounded by the Jezreel Valley; to the east by the Jordan Rift Valley; to the west by the Carmel Ridge (in the north) and the Sharon plain (in the west); to the south by the Jerusalem mountains. In Biblical times, Samaria "reached from the [Mediterranean] sea to the Jordan Valley",[13] including the Carmel Ridge and Plain of Sharon. The Samarian hills are not very high, seldom reaching the height of over 800 metres. Samaria's climate is more hospitable than the climate further south.

The mountain ranges in the south of the region continue into Judaea without a clear division.[2] 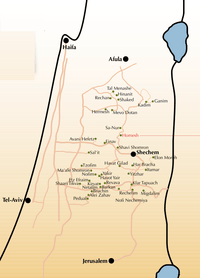 According to the Hebrew Bible, the Israelites captured the region known as Samaria from the Canaanites and assigned it to the Tribe of Joseph. After the death of King Solomon (c. 931 BC), the northern tribes, including those of Samaria, separated from the southern tribes and established the separate Kingdom of Israel. Initially its capital was Tirzah until the time of King Omri (c.884 BC), who built the city of Shomron and made it his capital.

In 726–722 BC, the new king of Assyria, Shalmaneser V, invaded Canaan and besieged the city of Samaria. After an assault of three years, the city fell and much of its population was taken into captivity and deported.[14] Little documentation exists for the period between the fall of Samaria and the end of the Assyrian Empire.[15]

In the Bible, Samaria was condemned by the Hebrew prophets for its "ivory houses" and luxury palaces displaying pagan riches.[16]

In 6 AD the region became part of the Roman province of Judaea, after the death of king Herod the Great.

The New Testament mentions Samaria in Luke 17:11–20, in the miraculous healing of the ten lepers, which took place on the border of Samaria and Galilee. John 4:1–26 records Jesus' encounter at Jacob's Well with the woman of Sychar, in which he declares himself to be the Messiah. In Acts 8:2 it is recorded that the early community of disciples of Jesus began to be persecuted in Jerusalem and were 'scattered throughout the regions of Judea and Samaria'. Philip went down to the city of Samaria and preached and healed the sick there.[18] In the time of Jesus, Iudaea of the Romans was divided into the toparchies of Judea, Samaria, Galilee and the Paralia. Samaria occupied the centre of Iudaea (John 4:4). (Iudaea was later renamed Syria Palaestina in 135, following the Bar Kokhba revolt.) In the Talmud, Samaria is called the "land of the Cuthim".

The modern history of Samaria began when the territory of Samaria, formerly part of the Ottoman Empire, was entrusted to the United Kingdom to administer in the aftermath of World War I as a Mandatory Palestine District of Samaria between 1918–1948. The 1947 UN partition plan called for the Arab state to consist of several parts, the largest of which was described as "the hill country of Samaria and Judea."[19]

As a result of the 1948 Arab–Israeli War, most of the territory was unilaterally incorporated as Jordanian-controlled territory and was administered as part of the West Bank (west of the Jordan river). The Jordanian-held West Bank came under the control of Israel during the 1967 Six-Day War. Jordan ceded its claims in the West Bank (except for certain prerogatives in Jerusalem) to the PLO in November 1988, later confirmed by the Israel–Jordan Treaty of Peace of 1994. In the 1994 Oslo accords, the Palestinian Authority was established and given responsibility for the administration over some of the territory of West Bank (Areas 'A' and 'B').

Samaria is one of several standard statistical districts utilized by the Israel Central Bureau of Statistics.[20] "The Israeli CBS also collects statistics on the rest of the West Bank and the Gaza District. It has produced various basic statistical series on the territories, dealing with population, employment, wages, external trade, national accounts, and various other topics."[21] The Palestinian Authority however use Nablus, Jenin, Tulkarm, Qalqilya, Salfit, Ramallah and Tubas governorates as administrative centers for the same region.

The Shomron Regional Council is the local municipal government that administers the smaller Israeli towns (settlements) throughout the area. The council is a member of the network of regional municipalities spread throughout Israel.[22] Elections for the head of the council are held every five years by Israel's ministry of interior, all residents over age 17 are eligible to vote. In special elections held in August 2015 Yossi Dagan was elected as head of the Shomron Regional Council.[23]

Israeli settlements in the West Bank are considered by the international community to be illegal under international law, but the Israeli government disputes this.[24] 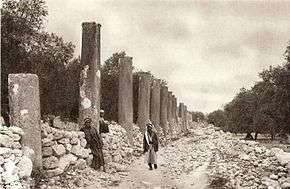 The ancient site of Samaria-Sebaste covers the hillside overlooking the Palestinian village of Sebastia on the eastern slope of the hill.[25] Remains have been found from the Canaanite, Hellenistic, Herodian, Roman and Byzantine era.[26]

Archaeological finds from Roman-era Sebaste, a site that was rebuilt and renamed by Herod the Great in 30 BCE, include a colonnaded street, a temple-lined acropolis and a lower city, where John the Baptist is believed to have been buried.[27]

The Harvard excavation of Samaria, which began in 1908, was headed by Egyptologist George Andrew Reisner.[28] The findings included Hebrew, Aramaic, cuneiform and Greek inscriptions, as well as pottery remains, coins, sculpture, figurines, scarabs and seals, faience, amulets, beads and glass.[29] The joint British-American-Hebrew University excavation continued under J.W. Crowfoot in 1931–35, during which some of the chronology issues were resolved. The round towers lining the acropolis were found to be Hellenistic, the street of columns was dated to the 3–4th century, and 70 inscribed potsherds were dated to the early 8th century.[30]

In 1908–35, remains of luxury furniture made of wood and ivory were discovered in Samaria, representing the Levant's most important collection of ivory carvings from the early first millennium BCE. Despite theories of their Phoenician origin, some of the letters serving as fitter's marks are in Hebrew.[16]

The Samaritans (Hebrew: Shomronim) are an ethnoreligious group named after and descended from ancient Semitic inhabitants of Samaria, since the Assyrian exile of the Israelites.[31] Religiously, the Samaritans are adherents of Samaritanism, an Abrahamic religion closely related to Judaism. Based on the Samaritan Torah, Samaritans claim their worship is the true religion of the ancient Israelites prior to the Babylonian exile, preserved by those who remained in the Land of Israel. Their temple was built at Mount Gerizim in the middle of 5th century BC and was destroyed under the Macabbean (Judean) king John Hyrcanus late in 110 BC, although their descendants still worship among its ruins. The antagonism between Samaritans and Jews is important in understanding the Bible's New Testament stories of the "Samaritan woman at the well" and "Parable of the Good Samaritan".