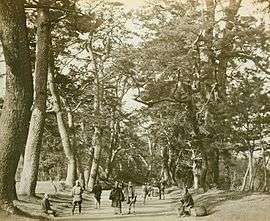 Tōkaidō, photographed by Felice Beato in 1865.

The Tōkaidō road (東海道, East Sea Road) was the most important of the Five Routes of the Edo period, connecting Edo (modern-day Tokyo) to Kyoto in Japan.

Unlike the inland and less heavily travelled Nakasendō, the Tōkaidō travelled along the sea coast of eastern Honshū, hence the route's name.[1] 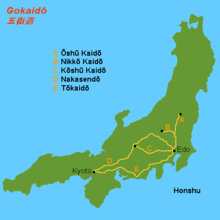 Nissaka-shuku, the 25th station on the Tōkaidō, as illustrated by the ukiyo-e master Hiroshige. This print is from the first (Hoeiko) edition of The Fifty-three Stations of the Tōkaidō. 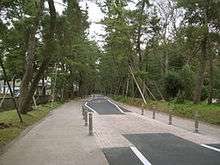 The standard method of travel was by foot, as wheeled carts were almost nonexistent and heavy cargo was usually sent by boat. Members of the higher class, however, traveled by kago. Women were forbidden to travel alone and had to be accompanied by men. Other restrictions were also put in place for travelers, but, while severe penalties existed for various travel regulations, most seem not to have been enforced.

There were government-sanctioned post stations along the Tōkaidō for travelers to rest in. These stations consisted of porter stations and horse stables, as well as lodging, food and other places a traveler may visit. The original Tōkaidō was made up of 53 stations between the termination points of Edo and Kyoto. The 53 stations were taken from the 53 Buddhist saints that Buddhist acolyte Sudhana visited to receive teachings in his quest for enlightenment.[2] At a few points along the route, there were checkpoints where travelers had to present traveling permits to pass.

The Tōkaidō in art and literature

Travel, particularly along the Tōkaidō, was a very popular topic in art and literature at the time. A great many guidebooks of famous places were published and distributed at this time, and a culture of virtual tourism through books and pictures thrived. Jippensha Ikku's Tōkaidōchū Hizakurige, translated as "The Shank's Mare", is one of the more famous novels about a journey along the Tōkaidō.

The famous artist Hiroshige depicted each of the 53 Stations of the Tōkaidō (shukuba) in his work The Fifty-three Stations of the Tōkaidō, and the haiku poet Matsuo Bashō traveled along the road.[3] The Tōkaidō gojūsan tsui (Fifty-Three Pairings along the Tōkaidō Road), created in 1845, is one of the most well-known and fascinating examples of woodblock prints inspired by the road. Japan's three leading print designers of the nineteenth century - Kuniyoshi, Hiroshige, and Kunisada - paired each Tōkaidō rest station with an intriguing, cryptic design. Due to the harsh and punitive Tenpō-era reforms, which attempted to impose a strictly defined morality, prints of celebrity actors, courtesans, and entertainers were outlawed during this time. Crafted to outwit the artistic restrictions imposed by the reforms, the woodcuts in the Parallel Series became popular visual puzzles that were frequently reproduced. Because of the ingenious approach to the Tōkaidō theme, the Tōkaidō gojūsan tsui has been praised as one of the most innovative and important works from the late Edo period. Its three designers followed their individual interests and strengths, and yet shared a common composition - dominant figures against distant landscapes. They used a variety of motifs, including stories from kabuki theater, poetry, famous tales, legends, landmarks, and local specialties.[4]

In the early 1980s, inspired by Hiroshige, American artist Bill Zacha traveled the Tokaido stations. He created a series of 55 serigraphs, each depicting one stop along the Tokaido way, and printed 100 copies of each design. These were collected in the 1985 book Tokaido Journey, along with Bill's recollections (in both English and Japanese) of traveling the road and the people he encountered.[5]

The British painter Nigel Caple travelled along the Tōkaidō Road between 1998 and 2000 making drawings of the 53 stations along the Tokaido. His inspiration was the Hoeido Edition of woodblock prints entitled The Fifty-three Stations of the Tōkaidō by Utagawa Hiroshige. These drawings by Nigel Caple formed the basis for a series of paintings and culminated in a touring exhibition and lectures during 2001-2002. Locations included Hertfordshire University and The British Museum. The exhibition was part of the UK’s Japan Festival 2001.[6] 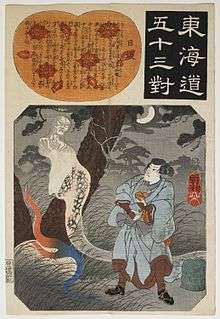 The video game Tōkaidō Gojūsan-tsugi, released by Sunsoft for the Famicom in July 1986 and later ported to other Nintendo platforms, features a firework maker protagonist who must travel the Tōkaidō to visit his fiancee, while thwarting attacks from a rival businessman.

In 1619, the Ōsaka Kaidō (大阪街道) was established, adding four more stations after Ōtsu-juku. These additions extended the route to Kōraibashi in Osaka. This extension was also called the Kyōkaidō (京街道), or was described as being a part of the 57 stations of the Tōkaidō.

Today, the Tōkaidō corridor is the most heavily travelled transportation corridor in Japan, connecting Greater Tokyo (including the capital Tokyo as well as Japan's second largest city Yokohama) to Nagoya (fourth largest), and then to Osaka (third largest) via Kyoto. The Tokyo-Nagoya-Kyoto-Osaka route is followed by the JR Tōkaidō Main Line and Tōkaidō Shinkansen, as well as the Tōmei and Meishin expressways. A few portions of the original road can still be found, however, and in modern times at least one person has managed to follow and walk much of it.[7]