The Tōkaidō Main Line (東海道本線, Tōkaidō-honsen) is a major Japanese railway line of the Japan Railways Group (JR Group) network, connecting Tokyo and Kōbe stations. It is 589.5 km (366.3 mi) long, not counting its many freight feeder lines around the major cities. The high-speed Tokaido Shinkansen largely parallels the line.

The term "Tōkaidō Main Line" is largely a holdover from pre-Shinkansen days; now various portions of the line have different names which are officially used by JR East, JR Central, and JR West. Today, there are no passenger trains that operate over the entire length of the line (other than certain overnight services; see below), so longer intercity trips require several transfers along the way.

The Tokaido Main Line is owned and operated by three JR companies:

The Tokaido Main Line in the Greater Tokyo Area has rapid services called Rapid Acty (快速アクティー, Kaisoku akutī) and Commuter Rapid (通勤快速, Tsūkin Kaisoku). It runs on dedicated tracks parallel to the Yamanote Line in central Tokyo, the Keihin-Tōhoku Line between Tokyo and Yokohama, and the Yokosuka Line between Tokyo and Ōfuna. Some Shōnan-Shinjuku Line trains share the segment south of Yokohama to Ōfuna and Odawara.

The Ueno-Tokyo Line, a JR East project, extended the services of the Utsunomiya Line, the Takasaki Line, and the Joban Line to Tokyo Station, allowing for through services to and from the Tokaido Line from March 2015.[1]

Almost all trains along this section of the line have "Green Cars" with forward-facing seats, which can be used after paying an additional fee.

The Tokaido Line between Atami and Maibara is operated by JR Central, and covers the Tōkai region - Shizuoka Prefecture, Aichi Prefecture, and Gifu Prefecture.

Both the Mino-Akasaka and Tarui branch lines separate from the Main Line at Minami-Arao junction (南荒尾信号場), located 3.1 km west of Ōgaki Station.

Between Ōgaki and Sekigahara, there is a 25 per mil grade. In 1944, a single track bypass was built to avoid this steep slope of the main line and the old westbound track was removed.

The western part of the Tōkaidō Main Line from Maibara to Kōbe is operated by JR West and forms the main trunk of the company's Urban Network in the Osaka-Kobe-Kyoto metropolitan area. Although the line is divided into three segments, known as the Biwako Line, JR Kyoto Line, and JR Kobe Line, they are part of a single contiguous network, with many services traversing multiple sections. The Biwako Line includes a segment of the Hokuriku Main Line. Some services on the Kosei, JR Takarazuka and Gakkentoshi lines run through onto the Tōkaidō Main Line.

The westernmost section between Osaka and Kōbe is part of the JR Kobe Line, which continues west to Himeji on the Sanyō Main Line. Although Kōbe is the official terminus of the Tōkaidō Main Line, most trains continue to Nishi-Akashi, Himeji and beyond.

Overnight trains on the Tōkaidō Line go from Tokyo to western Honshū and Shikoku. 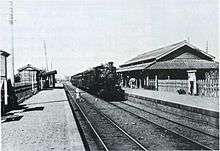 The Tōkaidō route takes its name from the ancient road connecting the Kansai region (Kyoto, Osaka) with the Kantō region (Tokyo, then Edo) through the Tōkai region (including Nagoya). Literally, it was the Tōkai road, or Road through Tōkai. The Tōkaidō Line does not follow the old road exactly, since the latter diverges at Nagoya toward the Mie Prefecture coastline; to follow it by train, the Kansai Main Line and Kusatsu Line would have to be followed from Nagoya to Kusatsu. The largest population centers in Japan are along this route - Tokyo, Yokohama, Nagoya, Kyoto, Osaka and Kobe. These centers have grown to occupy an ever more dominant role in the country's government, financial, manufacturing and cultural life.[3]

Historically, one of the first priorities of Japanese railway planners was to build a line from Tokyo to the Kansai region, either following the Tokaido route or the northern Nakasendō route. This decision remained unresolved as regional needs were addressed. The first railway in Japan was the line from Shinbashi to Sakuragicho in Yokohama, which opened in 1872; another segment of today's Tokaido Main Line, between Kyoto and Kobe, opened in 1877.

In 1883, the government decided to use the Nakasendo route, and construction of several segments commenced (including the modern-day Takasaki Line). Railways were opened between Ogaki and Nagahama (1884) and between Nagoya and Kisogawa (1886) in line with the Nakasendo plan. However, by 1886, it was clear that the Tokaido route would be more practical, and so the Nakasendo plan was abandoned.

The lines between Kisogawa and Ogaki, Yokohama and Kozu, and Hamamatsu and Obu were completed in 1887, and the first line from Tokyo to Kobe was completed in 1889, when Kozu and Hamamatsu were connected through the present-day Gotemba Line corridor, and the final segments were completed between Kasumigahara and Otsu. At the time, there was one Tokyo-Kobe train in each direction per day, taking over 20 hours each way.

The "Tokaido Line" name was formally adopted in 1895. In October 1895, following the Sino-Japanese War, through service to the Sanyo Railway (now Sanyo Main Line) began. Express service between Tokyo and Kobe began in 1896, sleeper service in 1900, and dining car service in 1901.

In 1906, all privately run main lines were nationalized under the newly created Japan Imperial Railway, which, at the time had a network of just over 7000 km. Automatic couplers were introduced on all freight wagons in 1926. In 1930, the first Tsubame ("swallow") express was introduced, reducing the Tokyo - Kobe travel-time to nine hours - a significant reduction from the twenty hours required in 1889 and fifteen in 1903.[3]

Infrastructure improvements included the completion of double track on this route in 1913, and the opening of the 7.8 km long Tanna Tunnel, which shortened the route by omitting a detour round the mountains between Atami and Numazu. This was the last major change to the alignment of the route.

By the early 1950s the Tōkaidō Line had become the main transportation artery of Japan. Although it was only 3 percent of the railway system by length, it carried 24 percent of JNR's passenger traffic and 23 percent of its freight, and the rate of growth was higher than any other line in the country. By 1956 electrification was completed along the Tokyo-Osaka section and with the introduction of new Kodama trains, travel time was reduced to six and a half hours. The line became so popular that tickets regularly sold out within ten minutes of being put on sale, one month in advance of the travel date.[3]

The capacity constraints on the Tokaido Main Line had been clear prior to World War II, and work started on a new 1,435 mm (4 ft 8 1⁄2 in) standard gauge "bullet train" line in 1940. Intercity passenger traffic between Tokyo, Nagoya and Osaka largely transferred to the Tōkaidō Shinkansen after it was completed in 1964. Since then, the Tokaido Main Line has been used as a commuter and freight line, serving a very small number of long-distance passenger trains (mainly overnight and sleeper services).

Following the Hanshin earthquake on January 17, 1995, the line was shut down between Takatsuki and Kobe, with certain segments remaining impassable until April 1. 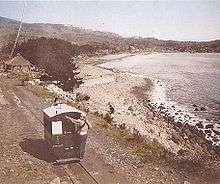 The Yoshihama line after conversion to steam power, circa 1920 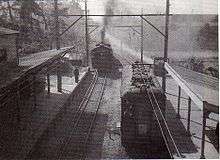 This article incorporates material from the corresponding article in the Japanese Wikipedia.