For other uses, see Taha (disambiguation). 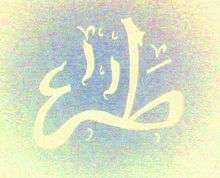 Calligraphy of the letter "Taa'" and "Haa'"

Sūrat Ṭā-Hā (/ˈtɑːˈhɑː/; Arabic: سورة طه‎‎) is the 20th sura (chapter) of the Qur'an with 135 ayat (verses). It is named "Ta-Ha" because the sura starts with the Arabic letters طه (see Muqatta'at). It is a Meccan sura, from the second Meccan period.[1] The main theme of the sura is about the existence of God. It addresses this theme through stories about Moses and Adam.[2] Sura 20 displays several thematic and stylistic patterns described by Angelika Neuwirth in Jane McAuliffe's book "The Cambridge Companion to the Qur'an."[3] These include the eschatological prophecies of the Qur'an, signs of God's existence, and debate. Additionally, sura 20 employs what has been termed the "ring structure" to reinforce its central theme.

This is the Sura that convinced Umar to revert to Islam.[4]

The Nöldeke chronological system, developed by Theodor Nöldeke, is a widely accepted modern approach to the organization of the Qur'an. This system groups the suras of the Qur'an into four time periods, depending on when they are thought to have been revealed. The units are: The first, second, and third Meccan periods, and the Medinan period.[1] The suras are categorized based upon thematic and linguistic commonalities with other suras. Sura 20 is the 55th sura in the Nöldeke chronological system. There are 48 (N1-N48) suras in the first Meccan period, according to Nöldeke. The second Meccan period consists of fewer (21) suras (N49-N69).[1] Being the 55th sura in this classification, sura 20 is closer to the first Meccan suras than the third Meccan suras, but exhibits a blend of properties from earlier and later suras of the Qur'an.

Sura 20 focuses upon one theme, and is structured in such a way as to reinforce this theme repeatedly. Sura 20 begins with an introduction which proclaims the greatness of God. In the body of the sura, there are two distinct stories, one about Moses and one about Adam, each of which is broken into smaller sections. Both stories are prefaced by instructions from God to Muhammad, and followed by a discussion of judgment day and the punishment of the disbelievers. To conclude the sura, there is another section restating and reinforcing the main theme, followed by a brief instruction to Muhammad. This repetitive pattern is what Carl Ernst terms the ring structure in his book "How to Read the Qur'an".[1] The first part of the sura, up until the story of Adam, and the second part are, thematically and structurally, copies of each other. The story about Moses gives a much longer, more detailed description to introduce the theme, and the shorter story of Adam serves to summarize and repeat the theme already discussed. The introduction and conclusion paragraphs, including the verses where God addresses Muhammad, are the bookends to the sura, and bind the stories together.[2]

This section is an introduction to the sura. It begins with God addressing Muhammad, then lists several of God's characteristics and praises Him. In this section, there is also a mention of the Qur'an as a reminder of God's existence, a theme that is seen throughout the Qur'an. One of the two verses in this sura mentioned in al-Wahidi's "Asbab al-Nuzul" is verse 2. According to al-Wahidi, God sent this verse to Muhammad because the Quraysh were saying that Muhammad was distressed because he left their religion, and that God only sent down the Qur'an to distress Muhammad.[5]

Verses 2–3: "It was not to distress you [Prophet] that We sent down the Qur'an to you, but as a reminder for those who hold God in awe…"[2] Verse 8: "God—There is no god but Him—the most excellent names belong to Him."[2]

This section recounts the story of Moses's encounter with Pharaoh, and how Moses's people were tested by God. Moses is originally tasked by God to go to Pharaoh, who has erred, and try to show him the right path. Moses is triumphant over Pharaoh because he is helped by God, but is then chased from the land by Pharaoh. After escaping, Moses leaves his people to confer with God. During his absence, his people are led awry by al-Samiri, and begin to worship a golden calf instead of God. Upon his return, Moses is furious. He exiles al-Samiri, and chastises his brother Aaron for allowing the people to worship anything other than the one true God. The main theme of the sura, that God's existence is obvious to those who are willing to perceive it and those who are not willing will be punished, is quite obvious in this story. Al-Samiri is punished for encouraging the people to worship the golden calf, but the others are willing to worship God and are forgiven. The name "al-Samiri" is most often translated as "the Samaritan".[6] Given this, there is a clear parallel between the story of Moses in sura 20 and the Jewish tradition concerning Samaritans. In Jewish tradition, Samaritans are hated. This is because, after their escape from captivity in Babylon, the pure monotheists (Jews) who tried to reestablish a nation in Jerusalem were strongly opposed by the neighboring Samaritans. The symbolism of this name is important. Using "the Samaritan" as the name of the man who led Moses's followers astray, and thus opposed Moses's pure monotheism, evokes the Jewish hatred of Samaritans and encourages the Qur'an's followers to hate al-Samiri similarly. It subtly hints that, in God's eyes, the worst people are those who try to make others err.

One of the most interesting aspects of this section is the first verse, verse 9. The wording of this verse suggests some familiarity with biblical stories and, specifically, the story of Moses. This presumption that listeners know biblical stories is seen throughout the Qur'an.[2]

This section again refers to the revealed nature of the Qur'an, and discusses the Day of Judgment. It gives a brief description of the events that will take place on judgment day. Disbelievers will be punished, but believers need not fear. This account of judgment day is an example of the eschatological nature of the Qur'an, as described by Angelika Neuwirth.[3] Also in this section, in verse 113, is a specific reference to the Qur'an in Arabic. This is intriguing for two reasons. First of all, it is not often stated explicitly that the Qur'an is in Arabic. Second of all, it suggests that God wants to warn one group (those who can understand Arabic) more than others.

Verse 99: "…We have given you a Qur'an from Us."[2] Verses 111–112: "Those burdened with evil deeds will despair, but whoever has done righteous deeds and believed need have no fear of injustice or deprivation."[2] Verse 113: "We have sent the Qur'an down in the Arabic tongue and given all kinds of warnings in it, so that they may beware or it may make them take heed."[2]

This section begins with a proclamation of God's greatness, and then another address from God to Muhammad. Then, God relates the story of Adam. When God created Adam and asked the angels to bow before him, all but Iblis did not bow. Iblis (Satan) was punished and made the enemy of man. Satan tempted Adam, and Adam gave in, straying from God. But, God forgave Adam. As with Samiri, Iblis led others away from God, and was punished for this. But, those who erred (Adam and the people of Moses) were forgiven, and allowed to return to God's guidance.

Verse 114: "Exalted be God, the one who is truly in control. [Prophet], do not rush to recite before the revelation is fully complete…"[2] Verse 116: "When We said to the angels, 'Bow down before Adam,' they did. But Iblis refused."[2] Verse 121–122: "…Adam disobeyed his Lord and was led astray—later his lord brought him close, accepted his repentance, and guided him."[2]

This section restates what was said before: Those who follow God will be rewarded, and those who do not will be punished on the Day of Judgment.

Verse 126: "…You ignored Our revelations when they came to you, so today you will be ignored."[2] Verse 127: "…The greatest and most enduring punishment is in the Hereafter."[2]

Instructions to the believers, verses 128–132

This section contains another of the patterns discussed by Neuwirth, the signs of God's existence.[3] It references the ruins of old cities as signs that God exists and can easily destroy people. Also, this section instructs believers to pray, and not to long for others' possessions. Verse 131 is the second verse of the sura that is mentioned in Asbab al-Nuzul. Wahidi says that this was sent down because Muhammad once desired food to entertain a guest, but could not afford it. The Jewish man selling the food refused to sell it without a security, and Muhammad was furious with this.[5] To appease his prophet, God sent down this verse.

Verse 131: "And do not gaze longingly at what We have given some of them to enjoy, the finery of this present life: We test them through this, but the provision of your Lord is better and more lasting."[2] Verse 132: "Order your people to pray, and pray steadfastly yourself."[2]

The conclusion includes another of the elements Neuwirth discusses: debate.[3] In the conclusion, there is a debate between the disbelievers and Muhammad. The disbelievers wonder why God does not bring them a sign, and in the final verse God instructs Muhammad what to reply to them.

Verse 135: "[Prophet], say, 'We are all waiting, so you carry on waiting: you will come to learn who has followed the even path, and been rightly guided.[2]'"