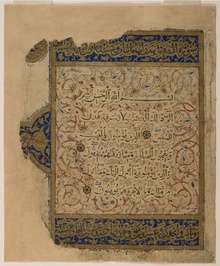 The Cow or Sūrat al-Baqarah (Arabic: سورة البقرة‎‎, "The Cow") is the second and longest chapter (Surah) of the Qur'an.[1] It is a Medinan sura (revealed to Muhammad when he was at Medina), with the exception of verse 281 which Muslims believe was revealed during The Farewell Pilgrimage.[2] It is also considered to be one of the first chapters revealed after the Hijra from Mecca to Medina.[3] The chapter comprises 286 verses (ayat) according to the division of Ali, the most widely accepted count among all Muslim denominations,[2] and includes the single longest verse in the Qur'an (2:282).[4] The surah's name references verses 66–72 which recall the story of a heifer sacrificed by the Israelites.[2]

Surah al-Baqarah enjoins fasting on the believer during the month of Ramadan.[5]

Al-Baqarah is the longest surah of the Quran, having 286 verses. According to Muslim belief, this Medinan Surah was not revealed at once to Muhammad, but the various Islamic social circumstances and conditions are discussed among verses.[6] Verse 281 is believed by Muslims to have been revealed during The Farewell Pilgrimage in Mecca.[2] It is also considered to be one of the first chapters revealed after the Hijra from Mecca to Medina.[3]

The surah addresses a wide variety of topics, including substantial amounts of law, and retells stories of Adam, Abraham and Moses. A major theme is guidance: urging the pagans (Al-Mushrikeen) and the Jews of Medina to embrace Islam, and warning them and the hypocrites (Munafiq) of the fate God had visited in the past on those who failed to heed his call.[6] The stories in this chapter are told to help the reader understand the theological conception of truth in Islam.[7] Condemnation of alcoholic beverages and gambling is also first found in the chapter,[8] and it is one of only four chapters in the Qur'an to refer to Christians as Nazarenes instead of the more frequent terms People of the Book or "Helpers of Christ."[9]

As a part of Lutheran efforts at translating the Qur'an in the 17th century, itinerant German orientalist Christian Ravis translated al-Baqarah along with Al-Fatiha and published bilingual versions in Amsterdam in 1646.[11]

The surah includes a few Islamic rules related to varying subjects, such as: prayers, fasting, Holy War on the path of God, the pilgrimage to Mecca, the change of the direction of prayer (Qiblah) from Jerusalem to Mecca, marriage and divorce, commerce, debt, and a great many of the ordinances concerning usury.[6] 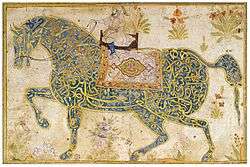 Verse 255 is "The Throne Verse" ( آية الكرسي ʾāyatu-l-kursī). It is the most famous verse of the Qur'an and is widely memorized and displayed in the Islamic world due to its emphatic description of God's omnipotence in Islam.

Verse 256 is one of the most quoted verses in the Qur'an. It famously notes that "there is no compulsion in religion". Two other verses, 285 and 286, are sometimes considered part of "The Throne Verse".[12]

Verse 216 is noted for ordaining Jihad.