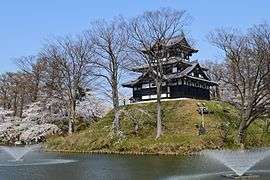 Takada domain (高田藩, Takada han), was a feudal domain under the Tokugawa shogunate of Edo period Japan. It is located in Echigo Province, Honshū. The domain was centered at Takada Castle, located in what is now part of the city of Jōetsu in Niigata Prefecture.[1][2][3] It was also known as Fukushima Domain (福嶋藩, Fukushima han).

During the Sengoku period, the area around Takada was controlled by the Uesugi clan. After Toyotomi Hideyoshi relocated Uesugi Kagekatsu to Aizu, he assigned the area round Takada to his general Hori Hideharu, who had distinguished himself in various battles. During the Battle of Sekigahara, he sided with Tokugawa Ieyasu; however as Echigo Province had many supporters and former retainers of the Uesugi clan, he was ordered to remain in Echigo on guard duty. After the establishment of the Tokugawa Shogunate, his son Hori Tadatoshi faced any problems with restless peasants, religious disputes, and an internal family dispute which resulted in his dispossession and exile. He was replaced by Matsudaira Tadateru, the 6th son of Tokugawa Ieyasu, who build Takada Castle. However, he was also dispossessed in 1616 after falling out of favour with Tokugawa Hidetada at the Siege of Osaka. A junior branch of the Sakai clan then briefly ruled Takada from 1616 to 1618, followed by Matsudaira Tadamasa from 1619-1623. Takada was then assigned to Matsudaira Mitsunaga, from another branch of the same Echizen-Matsudaira clan, from 1618 to 1681. This gave takada a period of much-needed stability; however, he was also dispossessed following an O-Ie Sōdō. Takada was then ruled as tenryo territory directly by the Tokugawa shogunate from 1681-1685.

A junior branch of the Sakakibara clan was then installed from 1741; and continued through the Meiji Restoration in 1868. During the Boshin War, the domain sided with the imperial cause, and after the Aizu War, many of the former samurai from Aizu were exiled to Takada. The head of the Sakakibara was ennobled with the title of Viscount in the kazoku system of peerage.[4]

As with most domains in the han system, Takada Domain consisted of several discontinuous territories calculated to provide the assigned kokudaka, based on periodic cadastral surveys and projected agricultural yields.[5][6]