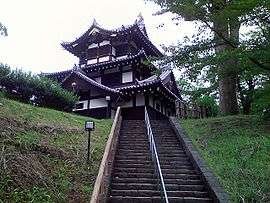 Jōetsu has a humid subtropical climate (Köppen climate classification Cfa). Owing to its location at the foot of Mount Hotaka facing onshore winds from the Sea of Japan, Jōetsu is the wettest low-lying part of the northern hemisphere temperate zone apart from the Owase region of the Kii Peninsula, receiving an average of around 2.8 metres (110.2 in) of precipitation per year. As a comparison, Forks on the windward side of Washington’s Olympic Peninsula receives 110 inches (2.79 m) and Rize on the Black Sea coast of Turkey 2,530 millimetres (100 in). The cold winds from the combined power of the Siberian High and Aleutian Low give Jōetsu an average of 6.3 metres (250 in) of snowfall that however tends to melt significantly even during the winter. On the 26th of February 1945, Jōetsu received as much as 3.77 metres (148 in) of snow in one day. The heaviest annual snowfall, since the beginning of regular snowfall measurements in 1953, was 14.94 metres (590 in) in the 1985/1986 season and the heaviest monthly total precipitation 942 millimetres (37 in) in January 1945, whilst the driest month was August 1985 with 16 millimetres (0.63 in).

The area of present-day Jōetsu was part of ancient Echigo Province, and the location of the Nara period kokufu of the province. During the Sengoku period, it was the center of the holdings of the Uesugi clan and notably Kasugayama Castle was a significant base for Uesugi Kenshin. The Uesugi were transferred by Toyotomi Hideyoshi and the area was later part of Takada Domain under the Edo period Tokugawa Shogunate. After the Meiji restoration, the towns of Takada and Naoetsu were created with the establishment of the municipalities system. Takada was elevated to city status on September 1, 1911 and Naoetsu on June 1, 1954.