The temperance movement is a social movement against the consumption of alcoholic beverages. Temperance movements typically criticize excessive alcohol consumption, promote complete abstinence (teetotalism), or use its political influence to press the government to enact alcohol laws to regulate the availability of alcohol or even its complete prohibition. 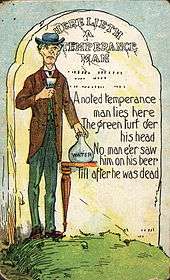 A cartoon from Australia

The temperance movement began in the early 19th century (around the 1820s). Before this, although there were pieces published against drunkenness and excess,[1] total abstinence from alcohol (i.e. teetotalism) was very rarely advocated or practiced. There was also a concentration on hard spirits rather than on abstinence from alcohol and on moral reform rather than legal measures against alcohol.[2]

An early temperance movement began during the American Revolution in Connecticut, Virginia and New York state, with farmers forming associations to ban whiskey distilling. The movement spread to eight states, advocating temperance rather than abstinence and taking positions on religious issues such as observance of the Sabbath.[3] The American Temperance Society was formed in 1826, within 12 years claiming more than 8,000 local groups and over 1,250,000 members.[4]

Temperance societies were being organized in England about the same time, many inspired by a Belfast professor of theology, and Presbyterian Church of Ireland Minister Rev. John Edgar,[5] who poured his stock of whiskey out of his window in 1829. He mainly concentrated his fire on the elimination of spirits rather than wine and beer.[2][6][7] On 14 August 1829 he wrote a letter in the Belfast Telegraph publicizing his views on temperance. He also formed the Ulster Temperance Movement with other Presbyterian clergy, initially enduring ridicule from members of his community.[8]

The 1830s saw a tremendous growth in temperance groups, not just in England and the United States, but also in British colonies, especially New Zealand[9] and Australia.

In the 1830s a more extreme form of temperance emerged called teetotalism, which promoted the complete abstinence from alcoholic beverages. This movement originated in Preston, England, in 1833.[10][11] The Catholic temperance movement started in 1838 when the Irish priest Theobald Mathew established the Teetotal Abstinence Society in 1838.[12] In 1838, the mass working class movement for universal suffrage for men, Chartism, included a current called "temperance chartism". Faced with the refusal of the Parliament of the time to give the right to vote to working people, the temperance chartists saw the campaign against alcohol as a way of proving to the elites that working-class people were responsible enough to be granted the vote. 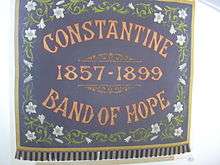 During the Victorian period, the temperance movement became more radical, advocating the legal prohibition of all alcohol, rather than just calling for moderation. It was also perceived to be tied in with both religious renewal and progressive politics, particularly female suffrage.

There was also a new focus on the working class and children; the Band of Hope was founded in Leeds in 1847 by the Reverend Jabez Tunnicliff and it aimed to save working class children from the parents of drink by teaching them the importance and principles of sobriety and teetotalism. In 1855, a national organisation was formed amidst an explosion of Band of Hope work. Meetings were held in churches throughout the UK and included Christian teaching. The group also campaigned politically for the curtailment of the influence of pubs and brewers. The organization also became quite militant, organizing rallies, demonstrations and marches to influence as many people as possible to "sign the pledge" of allegiance to the society and to resolve to abstain "from all liquors of an intoxicating quality, whether ale, porter, wine or ardent spirits, except as medicine."[13]

In this period there was local success at restricting or banning the sale of alcohol in many parts of the United States (with the Maine law being passed in 1851), New Zealand[14] and the United Kingdom. However, in the United States there was a setback for the Temperance movement as both sides relied on alcohol duty to finance the American Civil War and a number of states stopped prohibition, although this was reversed in the post war period in particular with the efforts of the fast expanding Anti-Saloon League focused on establishing dry states and dry counties.

Transition to a mass movement 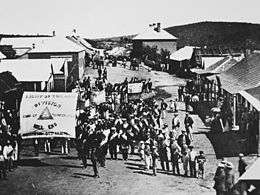 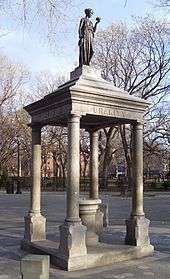 The temperance movement was a significant mass movement at this time and encouraged a general abstinence from the consumption of alcohol. A general movement to build alternatives to replace the functions of public bars existed, so the Independent Order of Rechabites was formed in England, with a branch later opening in America as a friendly society that did not hold meetings in public bars; there was also a movement to introduce temperance fountains across the United States—to provide people with reliably safe drinking water rather than saloon alcohol[15]—as well as a variety of temperance halls and coffee palaces as replacements for bars. Numerous periodicals devoted to temperance were also published[16] and temperance theatre, which had started in the 1820s, became an important part of the American cultural landscape at this time. 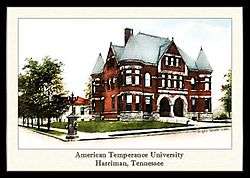 Many of the most important prohibitionist groups, such as the avowedly prohibitionist United Kingdom Alliance and the US-based (but international)[17] Woman's Christian Temperance Union, were started in this time.[18] In 1898 the Pioneer Total Abstinence Association was formed by James Cullen, an Irish Catholic, and spread to other English-speaking Catholic communities.[19] The Anti-Saloon League was an organization that began in 1893 in Ohio.

During this time, there was also a growth in non-religious temperance groups linked to left-wing movements, such as the Scottish Prohibition Party, which was founded in 1901 and went on to defeat Winston Churchill in Dundee in the 1922 general election.

The movement gained further traction during the First World War with the imposition of sharp restrictions on the sale of alcohol in many combatant countries in order to preserve resources for war use. In the UK the Liberal government passed the Defence of the Realm Act 1914 when pub hours were licensed, beer was watered down and was subject to a penny a pint extra tax,[20] and in 1916 a State Management Scheme meant that breweries and pubs in certain areas of Britain where armaments were made were nationalized.

At the end of the first world war there was the successful passage of the Eighteenth Amendment in the United States, introducing prohibition and the repeated near success of national prohibition in New Zealand.[21] Australian states and New Zealand introduced restrictive early closing times for bars during and immediately after the First World War.[22] In Canada in the 1920s imports of alcohol were cut off by provincial referendums.

Norway introduced partial prohibition in 1917, which became full prohibition through a referendum in 1919 although this was overturned in 1926. However, Finland introduced prohibition in 1915, but repealed it two decades later in 1935 after an upsurge in violent crime associated with criminal opportunism and the illegal liquor trade. Iceland did so at the same time, but liberalized consumption of spirits in 1923, although beer was still illegal until 1989. 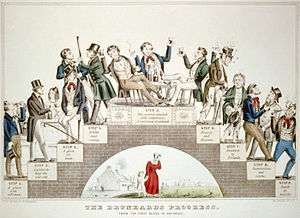 The Drunkard's Progress: a lithograph by Nathaniel Currier supporting the temperance movement, January 1846

The temperance movement started to wane in the 1930s, with prohibition being criticised as unhealthily distorting drinking habits,[22] encouraging criminals and discouraging economic activity. The legislative tide largely moved away from prohibition with the repeal of prohibition in the United States on December 5, 1933 and the gradual relaxation of licensing laws throughout the mid and late 20th century. In Australia early hotel closing times began being wound back in the 1950s and 1960s.[23]

There was some success during this time in the Third World, with temperance in some communities (such as Gujarat and Sri Lanka) being associated with anti-colonialism, while in other countries it is associated with religious revival.

The temperance movement still exists in many parts of the world, although it is generally less politically influential than it was in the early 20th century. In youth culture, temperance is an important part of the straight edge scene, which also stresses abstinence from other drugs.

The Salvation Army, which claims a membership of over 1.5 million and a presence in 126 countries,[24] continues to require that its members refrain from drinking alcohol as well as smoking, taking illegal drugs, and gambling.[25] Abstaining from alcohol is also a feature of The Church of Jesus Christ of Latter-day Saints (LDS Church), alongside abstinence from illegal drugs, tobacco, and tea.

The consumption of alcohol is prohibited in many Muslim countries.

Fitzpatrick's Herbal Health in Lancashire, England, is thought to be the last original Temperance Bar. 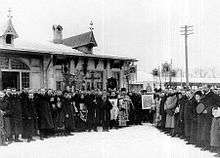 Pushkin, Saint Petersburg, group members of the temperance movement, the participants of the procession in front of the Tsarskoe Selo railway station (1912)