Terrassa (Catalan pronunciation: [təˈrasə]) is a Spanish city in the east central region of Catalonia, in the province of Barcelona, comarca of Vallès Occidental, of which it is the cocapital along with Sabadell.

The city is located in the Catalan Prelitoral depression (Depressió Prelitoral), at the feet of the Prelitoral mountain range (Natural reserve of Sant Llorenç del Munt) and the average altitude of the city is 277 meters above sea level. It is 20 and 18 kilometres from Barcelona and Montserrat respectively. 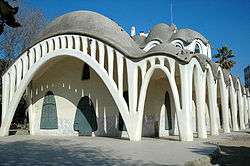 The Masia Freixa of Terrassa, sea of parabolic arches

The remains that have been found indicate that the area where Terrassa stands has been inhabited since prehistory. In 2005, during the construction of a tunnel for one of the city's railway lines, a prehistoric site was found in the Park of Vallparadís , with stone tools and fossils of hunted animals dating back 800,000 to 1,000,000 years, making this is one of the oldest prehistoric sites in Europe.

Terrassa originated as the Roman town of Egara (Municipium Flavium Egara), which was founded during the time of the emperor Vespasian (69-79 CE) alongside the torrent of Vallparadís (nowadays an urban park) close to the Iberian town of Egosa, on the site of which some ceramics and coins have been found.

The episcopal see of Ègara already existed by about 450 CE, and a Provincial Council was held there in 615. The cathedral continued to exist until 718, when it was taken over during the Muslim conquest. Today the ancient Visigothic-Romanesque churches of Sant Pere de Terrassa stand on the site. Other important remains from the Middle Ages are the castle of Vallparadís (from 1344 to 1413 a Carthusian monastery and today a municipal museum) and the tower of the castle-palace of the count-king).

In the 19th century the city played an important role in the industrial revolution, specializing in woollen fabrics, and today there is a major Modernista legacy as a result of the city's importance at that time. Particularly notable Modernista buildings include the Masia Freixa (1907), the Vapor Aymerich, Amat i Jover textile mill (1907) (now the Museum of Science and Industry of Catalonia), the Principal theater (1920), the city hall (1902), the Alegre de Sagrera house/museum (1911), the Industrial School (1904), the Gran Casino (1920), the Parc de Desinfecció (1920), and the Independència market (1908). Terrassa is a partner city of the Art nouveau network , a European network of co-operation created in 1999 for the study, preservation and development of Art Nouveau.

Terrassa from the west; some neighborhoods can be seen. 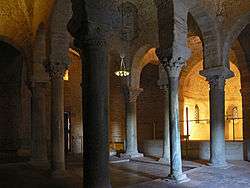 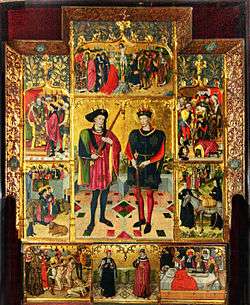 These three churches were built close to the site of old Ègara to be the seat of the Ègara Diocese, which was founded around 450 CE and remained in existence until the 8th century. This episcopal complex follows the Byzantine model of antiquity, with two churches (Sant Pere and Santa Maria) and a mausoleum (Sant Miquel). After a long period of construction, the churches were finished in the then-current manner about the 11th and 12th centuries and in Romanesque style, on the site of the pre-Romanesque buildings of the Visigothic period. The church of Santa Maria contains outstanding works of art, and there are murals dating from the Romanesque period to the Gothic. There is also an altar stone dating from the 10th century and medieval and Romanesque tombstones (one of which documents the name of the Roman town of Egara). In the transept there are three Gothic altarpieces.

The city is heir to a rich medieval, Modernista and industrial legacy, and possesses an extensive network of libraries, historical archives and museums.

The Municipal Council has 27 seats and according to the result of the local elections of May 2015 is formed by:

The municipal government is formed by a coalition between PSC and CiU. The Mayor is Jordi Ballart (PSC).

Terrassa is well connected with Barcelona's port and airport by highway and railway. The C-58 and C-16 also link the city with (Manresa), (Girona, France), and (Tarragona).

The railway reached Terrassa in 1856, and nowadays two lines serve the city. The first, operated by RENFE, connects with Barcelona and Lleida, and the second, operated by FGC, with Barcelona. FGC is extending its line to the north of the city, building three new stations; one of them will act as a rail hub with the RENFE line. This extension is known as the Terrassa Metro. An exact completion time for this project has yet to be determined.

Transport inside the city is provided by 14 bus lines operated by a municipal company (Transports Municipals d'Ègara). In the future, when the three new FGC stations and the two planned for the RENFE line are in use, the railway will also serve as urban transport.

A lot of musicians and actors are based in Terrassa because of the large number of music schools, a long amateur theater tradition and the local seat of the University of Drama. From 1982 the Terrassa Jazz Festival is specially outstanding, with guests like Stan Getz, Chet Baker, Dexter Gordon, Tete Montoliu, Dizzy Gillespie.

Terrassa was a pioneer in the introduction of field hockey and korfball in Catalonia and played an important role in the introduction of basketball. The most important sport in the city is field hockey. During the Barcelona Olympic Games in 1992, Terrassa was the city where the field hockey competition was played. The great number of hockey players from Terrassa who have participated in the Olympic Games over the years has led to Terrassa's being referred to as the "most Olympic city in the world". Between 1928 and 2004, Terrassa sent 124 athletes to the Olympic Games, the majority of whom were hockey players. Three local field hockey clubs play in the main Spanish league championship: 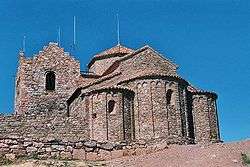 Romanesque monastery at the top of la Mola (1107 m), the highest point of the natural reserve of Sant Llorenç del Munt i Serra de l'Obac

Terrassa is the home and birthplace of FC Barcelona and Spain national football team midfielder Xavi.

The city's castells teams are the Minyons de Terrassa and the Castellers de Terrassa. On November 22, 2015, Terrassa's Plaça Vella was the scene of the world's first successful 4 de 10 amb folre i manilles, completed by the Minyons.[3]

Terrasa has a local newspaper, the Diari de Terrassa, that is published daily from Tuesday to Saturday, as well as several radio stations: Ràdio Terrassa/Cadena SER Vallès on 828 AM and 89.4 FM, with more than 75 years of history behind it, being one of the pioneering radio stations in Catalonia and Spain; the municipal radio (Noucincpuntdos, 95.2 FM); and Radio Star de Terrassa, the city's cultural station, on 100.5 FM, which was founded in 1984 and is one of the historic local radios of Catalonia.

Also the city has several local channels - TV20 Locàlia Vallès and Canal Terrassa, with an audience of more than 50,000 viewers. In addition, there is the free newspaper Terrassa Societat, published monthly with a circulation of 50,000, and Terrassa Month, published of Monday through Friday and also covering local events. Since 2005 the municipal digital newspaper e-newsterrassa.com, in Catalan, has been on line (today as for 2013 this digital newspaper has been taken down now). The municipal Web site www.terrassa.cat receives no fewer than 150,000 monthly visitors. As for 2013, current and working digital newspaper in Terrassa is Diari de Terrassa i Catalunya InfoTalQual.com 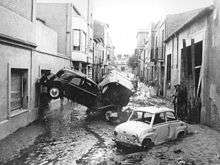 Results of the 1962 flood in Terrassa the day after. Picture obtained in the Tobella's archive.

The 25th September 1962, after a long dry season, between 212 and 252 litres of rain per square metre fell in three hours. It caused rivers Llobregat and Besòs and their tributaries to overflow, creating a water avenue that caused 700 victims and lots of material losses.

The Vallès Occidental comarca was the most damaged. In particularly Terrassa, with 327 victims. The reason of these numbers was that building was permitted around two dry streams used to bring rain water to the Llobregat river. They met in a wedge shape and were not properly channelized. When the streams overflowed created what was called "the dead triangle", with more than a hundred victims only in the Ègara neighbourhood.[4]