In theoretical computer science and mathematics, the theory of computation is the branch that deals with how efficiently problems can be solved on a model of computation, using an algorithm. The field is divided into three major branches: automata theory and language, computability theory, and computational complexity theory, which are linked by the question: "What are the fundamental capabilities and limitations of computers?".[1]

In order to perform a rigorous study of computation, computer scientists work with a mathematical abstraction of computers called a model of computation. There are several models in use, but the most commonly examined is the Turing machine.[2] Computer scientists study the Turing machine because it is simple to formulate, can be analyzed and used to prove results, and because it represents what many consider the most powerful possible "reasonable" model of computation (see Church–Turing thesis).[3] It might seem that the potentially infinite memory capacity is an unrealizable attribute, but any decidable problem[4] solved by a Turing machine will always require only a finite amount of memory. So in principle, any problem that can be solved (decided) by a Turing machine can be solved by a computer that has a finite amount of memory.

The theory of computation can be considered the creation of models of all kinds in the field of computer science. Therefore, mathematics and logic are used. In the last century it became an independent academic discipline and was separated from mathematics.

Automata theory is the study of abstract machines (or more appropriately, abstract 'mathematical' machines or systems) and the computational problems that can be solved using these machines. These abstract machines are called automata. Automata comes from the Greek word (Αυτόματα) which means that something is doing something by itself. Automata theory is also closely related to formal language theory,[5] as the automata are often classified by the class of formal languages they are able to recognize. An automaton can be a finite representation of a formal language that may be an infinite set. Automata are used as theoretical models for computing machines, and are used for proofs about computability.

Language theory is a branch of mathematics concerned with describing languages as a set of operations over an alphabet. It is closely linked with automata theory, as automata are used to generate and recognize formal languages. There are several classes of formal languages, each allowing more complex language specification than the one before it, i.e. Chomsky hierarchy,[6] and each corresponding to a class of automata which recognizes it. Because automata are used as models for computation, formal languages are the preferred mode of specification for any problem that must be computed.

Another important step in computability theory was Rice's theorem, which states that for all non-trivial properties of partial functions, it is undecidable whether a Turing machine computes a partial function with that property.[8] 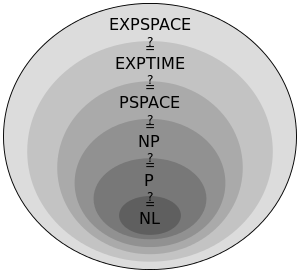 A representation of the relation among complexity classes

Complexity theory considers not only whether a problem can be solved at all on a computer, but also how efficiently the problem can be solved. Two major aspects are considered: time complexity and space complexity, which are respectively how many steps does it take to perform a computation, and how much memory is required to perform that computation.

In order to analyze how much time and space a given algorithm requires, computer scientists express the time or space required to solve the problem as a function of the size of the input problem. For example, finding a particular number in a long list of numbers becomes harder as the list of numbers grows larger. If we say there are n numbers in the list, then if the list is not sorted or indexed in any way we may have to look at every number in order to find the number we're seeking. We thus say that in order to solve this problem, the computer needs to perform a number of steps that grows linearly in the size of the problem.

To simplify this problem, computer scientists have adopted Big O notation, which allows functions to be compared in a way that ensures that particular aspects of a machine's construction do not need to be considered, but rather only the asymptotic behavior as problems become large. So in our previous example we might say that the problem requires

Perhaps the most important open problem in all of computer science is the question of whether a certain broad class of problems denoted NP can be solved efficiently. This is discussed further at Complexity classes P and NP, and P versus NP problem is one of the seven Millennium Prize Problems stated by the Clay Mathematics Institute in 2000. The Official Problem Description was given by Turing Award winner Stephen Cook.

Aside from a Turing machine, other equivalent (See: Church–Turing thesis) models of computation are in use.

Lambda calculus
A computation consists of an initial lambda expression (or two if you want to separate the function and its input) plus a finite sequence of lambda terms, each deduced from the preceding term by one application of Beta reduction.
Combinatory logic
is a concept which has many similarities to

-calculus, but also important differences exist (e.g. fixed point combinator Y has normal form in combinatory logic but not in

appear, then terms of the form 'g(5)=7' or 'h(3,2)=10' might appear. Each entry in this sequence needs to be an application of a basic function or follow from the entries above by using composition, primitive recursion or μ recursion. For instance if

, then for 'f(5)=3' to appear, terms like 'g(5)=6' and 'h(5,6)=3' must occur above. The computation terminates only if the final term gives the value of the recursive function applied to the inputs.

Markov algorithm
a string rewriting system that uses grammar-like rules to operate on strings of symbols.

Register machine
is a theoretically interesting idealization of a computer. There are several variants. In most of them, each register can hold a natural number (of unlimited size), and the instructions are simple (and few in number), e.g. only decrementation (combined with conditional jump) and incrementation exist (and halting). The lack of the infinite (or dynamically growing) external store (seen at Turing machines) can be understood by replacing its role with Gödel numbering techniques: the fact that each register holds a natural number allows the possibility of representing a complicated thing (e.g. a sequence, or a matrix etc.) by an appropriate huge natural number — unambiguity of both representation and interpretation can be established by number theoretical foundations of these techniques.

In addition to the general computational models, some simpler computational models are useful for special, restricted applications. Regular expressions, for example, specify string patterns in many contexts, from office productivity software to programming languages. Another formalism mathematically equivalent to regular expressions, Finite automata are used in circuit design and in some kinds of problem-solving. Context-free grammars specify programming language syntax. Non-deterministic pushdown automata are another formalism equivalent to context-free grammars. Primitive recursive functions are a defined subclass of the recursive functions.

Different models of computation have the ability to do different tasks. One way to measure the power of a computational model is to study the class of formal languages that the model can generate; in such a way to the Chomsky hierarchy of languages is obtained.

(There are many textbooks in this area; this list is by necessity incomplete.)

Books on computability theory from the (wider) mathematical perspective