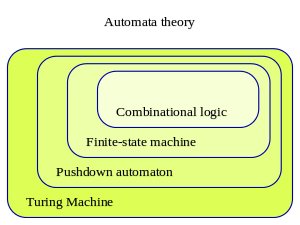 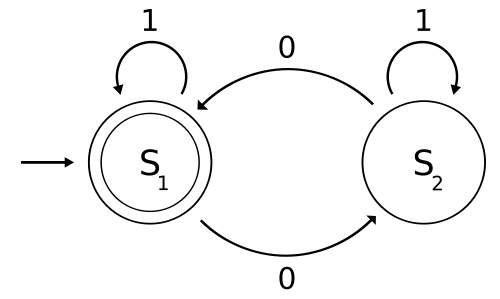 The study of the mathematical properties of such automata is automata theory. The picture is a visualization of an automaton that recognizes strings containing an even number of 0s. The automaton starts in state S1, and transitions to the non-accepting state S2 upon reading the symbol 0. Reading another 0 causes the automaton to transition back to the accepting state S1. In both states the symbol 1 is ignored by making a transition to the current state.

Automata theory is the study of abstract machines and automata, as well as the computational problems that can be solved using them. It is a theory in theoretical computer science and discrete mathematics (a subject of study in both mathematics and computer science). The word automata (the plural of automaton) comes from the Greek word αὐτόματα, which means "self-acting".

The figure at right illustrates a finite-state machine, which belongs to a well-known type of automaton. This automaton consists of states (represented in the figure by circles) and transitions (represented by arrows). As the automaton sees a symbol of input, it makes a transition (or jump) to another state, according to its transition function, which takes the current state and the recent symbol as its inputs.

Following is an introductory definition of one type of automaton, which attempts to help one grasp the essential concepts involved in automata theory/theories.

In short, an automaton is a mathematical object that takes a word as input and decides either to accept it or reject it. Since all computational problems are reducible into the accept/reject question on words (all problem instances can be represented in a finite length of symbols), automata theory plays a crucial role in computational theory.

Automaton
A deterministic finite automaton is represented formally by a 5-tuple (Q,Σ,δ,q0,F), where:

Accepting word
A word w ∈ Σ* is accepted by the automaton if qn ∈ F.

Recognized language
An automaton can recognize a formal language. The language L ⊆ Σ* recognized by an automaton is the set of all the words that are accepted by the automaton.

Automata are defined to study useful machines under mathematical formalism. So, the definition of an automaton is open to variations according to the "real world machine", which we want to model using the automaton. People have studied many variations of automata. The most standard variant, which is described above, is called a deterministic finite automaton. The following are some popular variations in the definition of different components of automata.

Different combinations of the above variations produce many classes of automaton.

Automata theory is a subject matter that studies properties of various types of automata. For example, the following questions are studied about a given type of automata.

Automata theory also studies if there exist any effective algorithm or not to solve problems similar to the following list.

The following is an incomplete list of types of automata.

The following is an incomplete hierarchy in terms of powers of different types of virtual machines.[1]

Each model in AT plays important roles in several applied areas. Finite automata are used in text processing, compilers, and hardware design. Context-free grammar (CFGs) are used in programming languages and artificial intelligence. Originally, CFGs were used in the study of the human languages. Cellular automata are used in the field of biology, the most common example being John Conway's Game of Life. Some other examples which could be explained using automata theory in biology include mollusk and pine cones growth and pigmentation patterns. Going further, a theory suggesting that the whole universe is computed by some sort of a discrete automaton, is advocated by some scientists. The idea originated in the work of Konrad Zuse, and was popularized in America by Edward Fredkin.

Automata simulators are pedagogical tools used to teach, learn and research automata theory. An automata simulator takes as input the description of an automaton and then simulates its working for an arbitrary input string. The description of the automaton can be entered in several ways. An automaton can be defined in a symbolic language or its specification may be entered in a predesigned form or its transition diagram may be drawn by clicking and dragging the mouse. Well known automata simulators include Turing’s World, JFLAP, VAS, TAGS and SimStudio.[2]

One can define several distinct categories of automata[3] following the automata classification into different types described in the previous section. The mathematical category of deterministic automata, sequential machines or sequential automata, and Turing machines with automata homomorphisms defining the arrows between automata is a Cartesian closed category,[4][5] it has both categorical limits and colimits. An automata homomorphism maps a quintuple of an automaton Ai onto the quintuple of another automaton Aj.[6] Automata homomorphisms can also be considered as automata transformations or as semigroup homomorphisms, when the state space,S, of the automaton is defined as a semigroup Sg. Monoids are also considered as a suitable setting for automata in monoidal categories.[7][8][9]

One could also define a variable automaton, in the sense of Norbert Wiener in his book on The Human Use of Human Beings via the endomorphisms