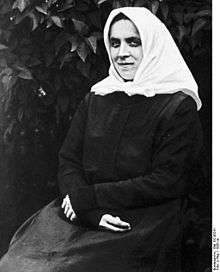 She was born in the village of Konnersreuth in Bavaria, Germany, where she lived all her life. She was born into a large family with little income. She was a member of the Third Order of St. Francis.

On 10 March 1918, Therese Neumann was partially paralyzed after falling off a stool while attending to a fire in her uncle's barn.[1] She sustained more falls and injuries during this period. After one particular fall she claimed to have lost much of her eyesight, and in 1919 she claimed to have been blinded completely. Bedridden, she reportedly developed horrible bed sores that sometimes exposed bone.[1]

Therese reported that her eyesight was restored on 29 April 1923—the day Therese of Lisieux was beatified in Rome. Therese Neumann had been praying novenas in advance of this day.[1] On 17 May 1925 Therese of Lisieux was fully canonized as a saint in the Catholic Church. Therese Neumann said the saint called to her and then cured her of her paralysis and bed sores.[1]

On 7 November 1925 Neumann took to her bed again, and on 13 November claimed to have been diagnosed with appendicitis. According to her account, while prepared for surgery she convulsed violently and stared at the ceiling finally saying, "Yes." She asked her family to take her to the church to pray immediately. She then announced that she had been cured of all traces of appendicitis.[1]

Physicians and skeptics have disputed Neumann's claims of miraculous cures.[2] According to skeptical investigator Joe Nickell on one occasion Neumann claimed to have healed herself from blindness, but whilst "blind" she was examined and her pupils responded normally to light. Nickell suspected that Neumann's claims were performed by "hysterical hypochondria" or "outright fakery".[2]

Therese would later apparently develop the stigmata. She said that on 5 March 1926, the first Friday of Lent, a wound had appeared slightly above her heart, but that she had kept this secret. However, she did report a vision of Jesus at Mount of Olives with three Apostles.[1]

On 12 March, she said she had another vision of Christ at Mt. Olivet, along with the crowning of thorns. She also claimed that the wound above her heart reappeared on this day, and she spoke to her sister about it. She claimed the wound also reappeared on Friday of the following week. By 26 March, she was claiming the same wound accompanied by a vision of Christ bearing the cross and a similar wound on her left hand. Blood was observed on her clothing, and she no longer attempted to keep the information to herself.

On Good Friday, Neumann, according to her own testimony witnessed the entire Passion of Christ in her visions. She displayed wounds on her hands and feet accompanied by blood apparently coming from her eyes. Blood poured from the wounds, however - according to Josef Hanauer's book The Swindle of Konnersreuth - onlookers did not actually see the bleeding in action, only the blood itself.[3]

On Easter Sunday, she claimed a vision of the resurrection of Christ. For several consecutive Fridays after that, she stated she was experiencing the Passion of Christ, apparently suffering in her own body along with all his historic agonies. She claimed to have especially suffered the Passion on Good Friday each year.

On 22–23 March 1928 Neumann's stigmata claims were investigated at her home by a group of observers including bishops and physicians.[4] Professor Martini the director of the University Hospital Bonn observed Neumann and wrote a report about her stigmata. He found her behaviour suspicious as the blood would only appear from her wounds when he was asked to leave the room.[2] According to Martini:

"The fact that two or three times the observers were made to go out just at the moment when a fresh effusion of blood evidently came to cover the wounds arouses the suspicion, on the contrary, that during this time something happened which needed to be hidden from observation. It was for the same reason that I disliked her frequent manipulations behind the raised coverings."[4]

A psychoanalytic study of Neumann has suggested that her stigmata resulted from post-traumatic stress symptoms expressed in unconscious self-mutilation through abnormal autosuggestibility.[5]

From 1923 until her death in 1962, Therese Neumann professed to have consumed no food other than The Holy Eucharist, nor to have drunk any water from 1926 until her death.[6]

Montague Summers in his book The Physical Phenomena of Mysticism speaks of her supposedly supernatural ability to survive for long periods without food or water.[7]

In July 1927, Neumann's claims of inedia were examined at her house. She was physically examined and tested by the physician Otto Seidl and four Franciscan nurses, for fifteen days (July 14 to 28). Neumann was not observed to have eaten anything, however, suspicion was generated. At the beginning she had weighed 121 pounds which dropped during the test period to 112.5 pounds. By the last day her weight had returned to normal. Historian Ian Wilson commented the evidence indicated that Neumann "went back to normal food and drink intake". The test was never repeated and her family denied permission for any further tests.[8]

Wilson found the inedia claims of Neumann suspicious. He noted that she "had a vigorous, stocky build throughout most of this time, and all reason tells us that it would be impossible to survive so long without food or drink."[8]

Otto Seidl who wrote a report in 1928, described Neumann as a hysteric. A recent medical paper that examined Seidl's report commented that "while under surveillance by four nuns for 14 days, Neumann exhibited no intake of nourishment; weight measurements and urine tests however suggest[ed] the opposite.... As far as medical records go, Therese Neumann's is one of a series of surprisingly similar cases of stigmata development, conversion disorder, and alleged absence of nutrition. In nosological terms, these would be classified today as dissociative disorders."[9] 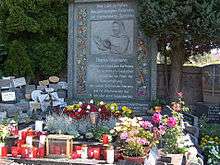 It was claimed that during some of her Friday trances, she would utter phrases identified by witnesses as ancient Aramaic. She was also said to have been able to understand Hebrew, Greek, and Latin.[10]

During the Third Reich, Therese Neumann was the target of ridicule and defamation, as the Nazis knew about her dissenting views and feared her growing popularity. She was observed by the Gestapo.[11] She was never physically harmed, though her family home, parish church and priest's house all received direct attacks. She encouraged Fritz Gerlich to continue his opposition to Hitler and his national-socialist party. Gerlich was subsequently killed for his opposition.

Paramahansa Yogananda visited her and wrote about her case in his book Autobiography of a Yogi, published in 1946. He wrote an entire chapter, Therese Neumann, The Catholic Stigmatist of Bavaria, which reverently gives a vivid first-hand description of one of her Friday Passion trances.[12]

Reinhard Lorenz from Meißen (R.L.M.), a medium from the New Salems Society, received a message about Neumann in 1929, allegedly coming from God the Father. It was published in "Das Wort", the periodical of the movement.[13]

On 18 September 1962, Therese Neumann died from cardiac arrest, after having suffered from angina pectoris for some time.

The Roman Catholic Church has neither confirmed nor denied the inedia (from which she suffered according to her critics), nor her stigmata. The "Resl", as she is colloquially known, nonetheless attained a place in popular piety — a petition asking for her beatification was signed by 40,000 people. In 2005, Gerhard Ludwig Müller, Bishop of Regensburg, formally opened the Vatican proceedings for her beatification.