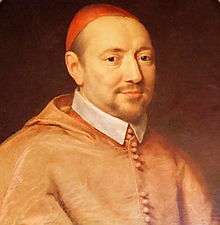 Pierre de Bérulle, Cong. Orat. (4 February 1575 – 2 October 1629), was a French Catholic priest, cardinal and statesman, one of the most important mystics of the 17th century in France. He was the founder of the French school of spirituality, who could count among his friends and disciples Vincent de Paul and Francis de Sales. 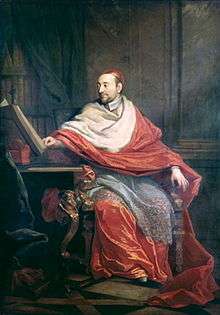 Bérulle was born in the Château of Cérilly, near Troyes in Champagne, into two families of distinguished magistrates on 4 February 1575.[1] The château de Cérilly is situated in the modern department of Yonne, while the village adjacent to it, Bérulle, is in Aube. He was educated by the Jesuits at Clermont and at the Sorbonne in Paris. He published his first work, his Bref Discours de l'abnegation interieure, in 1597. Soon after his ordination as a priest in 1599, he assisted Cardinal Duperron in his public controversy with the Protestant Philippe de Mornay, and made numerous converts.

With the co-operation of his cousin, Madame Acarie (the Blessed Marie of the Incarnation, O.C.D.) in 1604 he introduced the Discalced Carmelite nuns of the reform of Teresa of Avila into France.[1]

In 1608, Vincent de Paul moved to Paris, where he came under the influence of Abbé (later Cardinal) Pierre de Bérulle, whom he took as his spiritual director. De Bérulle was responsible for De Paul taking up an appointment to the parish of Clichy.[2]

A mainstay of the Counter-Reformation in France, in 1611 Bérulle founded in Paris the Congregation of the French Oratory, on the model of the one founded in 1556 by St. Philip Neri at Rome. Owing to the differences of time and place the French congregation varied in some important respects from the Italian Oratory.[1] Whereas in the Italian congregation the houses were independent of one another, de Bérulle placed the government of all the houses in the hands of the superior-general.[3]

Bérulle was a chaplain to King Henry IV of France, and several times declined his offers to be made a bishop. He obtained the necessary dispensations from Rome for Henrietta Maria's marriage to Charles I, and acted as her chaplain during the first year of her stay in England. In 1626, as French ambassador to Spain, he concluded the favourable Treaty of Monzón, to which his enemy Cardinal Richelieu found objections. After the reconciliation of King Louis XIII with his mother, Marie de Medici, through his agency, he was appointed a councillor of state, but had to resign this office, owing to his pro-Habsburg policy, which was opposed by Richelieu. For religious reasons, Cardinal Bérulle favored the allegiance of France with Austria and Spain, the other Catholic powers, while Cardinal Richelieu wanted to undermine their influence in Europe.[4] He was made cardinal by Pope Urban VIII on 30 August 1627, but never received the red hat.

Pierre de Bérulle died October 2, 1629 in Paris, while celebrating Mass, and was buried in the chapel of the Oratorian College of Juilly.[4]

Bérulle is generally regarded as being an initiator of the French School of Spirituality, a powerful spiritual, missionary, and reform movement that animated the Church in France in the early seventeenth century. The movement was characterized by: a deep sense of God’s grandeur and of the Church as the Body of Christ, a certain pessimistic Augustinian view of man that nonetheless stresses positive potential through God, and a strong apostolic and missionary commitment.[2]

Bérulle's depiction of the mystical journey through Mary to Christ, and through Christ to the Trinity is a hallmark of the French School of spirituality.[5]

The term 'School' is potentially problematic, though, because the other commonly cited members of this 'School', such as Saint John Eudes and the Venerable Jean-Jacques Olier, Saints Louis-Marie Grignion de Montfort and Jean-Baptiste de la Salle, do not simply develop the thought of Bérulle, but all have their own significant insights. The 'School' does not therefore have simply one founder (a role Bérulle has sometimes been cast in). However, the many common elements among these writers (such as an emphasis on living in the Spirit of Jesus, particular forms of meditative prayer, a pedagogy institutionalised in particular seminaries and schools), means that it can be considered as a distinct tradition of spirituality.[6]

Bérulle encouraged Descartes' philosophical studies, and it was through him that the Samaritan Pentateuch, recently brought over from Constantinople, was inserted in Lejay's Bible Polyglotte (1628–45).

Pope Urban VIII called Bérulle the "apostle of the incarnate Word" and was an opponent of the abstract school of mysticism that by-passed the humanity of Christ. Bérulle was a product of his own age. Highly influenced by sixteenth and seventeenth century deference to monarchs, well aware of the honor due to kings and princes, Berulle projected the same attitudes onto spirituality. In his Discours Bérulle emphasized the incarnate Word of Jesus, and the abasement, self-surrender, servitude and humiliation— all Bérulle's words— of his Incarnation.[7]

The chief works of Cardinal de Bérulle are: