Tiara Air N.V., operating as Tiara Air Aruba, was an airline headquartered and Oranjestad, Aruba in the Dutch Caribbean.[1] The airline, which began operations in 2006, operated scheduled flights to Bonaire, Colombia, Curacao, the United States and Venezuela. The airlines fleet consisted of the Shorts 360 and Boeing 737 aircraft for passenger operations, with a Learjet 35 for ambulance and private operations.

Tiara Air resumed its operations after being affected by the issues resolving the Venezuela currency crisis.

The airline was founded by Alejandro Muyale, whose family owns and performs Ground Handling Services at the Queen Beatrix International Airport in Aruba for over 30 years under the name of General Air Services (GenAir), as well as offering services in Curacao for over 6 years under the name Antillean Flight Services (AFS). Mr. Muyale fulfilled his dream of applying for certification with the Department of Civil Aviation (DCA) in Aruba. The Economic Authority had been granted an aircraft, a 36-seater Shorts 360 with a second aircraft purchased soon afterwards - both from Pacific Coastal Airlines in Canada. Mr. Muyale named the airline after his daughter Tiara Muyale. The word "tiara" is derived from Latin, meaning the word"crown".[3] The company logo of Tiara Air, includes a crown on top of the T, representing a Tiara.

In 2008, it was announced that the airline would replace its two Shorts 360, with Saab 340A's with much greater range as well as introducing new routes in the region and expanding services to current destinations.[4] As of December 2012, the airline still operates its two shorts 360, although a Saab 340 had been leased on occasion. 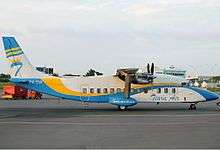 In 2010, Tiara Air was the official airline for the Aruba International Film Festival. Because of this, an official billboard-like sticker was added on the fuselage of one of the airline's Shorts 360 (P4-TIB). The aircraft carried this special livery between Spring 2010 and Summer 2010. The following years, a poster size sticker was added near the main exit door of both aircraft as promotion for the festival.[5]

Due to the Venezuelan Airline Crisis, Tiara Air suspended its services in 2014 with several attempts to restart. In early 2016, it was revealed that the airlines formed a partnership with Venezuela's Avior Airlines which would result in Avior's aid to the airline financially as well as leasing aircraft to the airline to help with its reestablishment. The airline, restarted services to Curacao in April 2016 and will recommence service to Las Piedras in May 2016 using one of its remaining Shorts 360.

In March 2011, the airline announced it would be soon offering Air Ambulance and Private Jet Services which will be operated by a Learjet 35. The ambulance service will be operated with advanced life support-equipment and medical and nursing staff that are 24 hours on call. Service will currently be offered to Aruba, Bonaire and Curaçao.[6] Private Jet services are available though request.

In April 2011, Tiara Air and the Aruban government recently announced a collaboration with Curaçao's national airline Insel Air. The collaboration should enforce optimal use of the touristic routes to Aruba.

In order to serve passengers best, the agreement is valid for all routes that both airlines operate. The Aruban government also stated that it was committed to release an AOC (Air Operating Certificate) to Insel Air within three months, making it possible for Insel Air to also proceed as an Aruban airline under the name "Insel Air Aruba."

Due to the AOC, Insel Air Aruba will be able to operate many touristic flights to Aruba, therefore creating more inbound flights for the island.[7]

According to Mr. E.K. Heerenveen, Chief General and International Affairs, "In this new agreement Insel Air Aruba will operate three Fokker 50 and one MD-80 increasing the total availability of seats to 50.000 a month. Due to the cooperation with Tiara Air an extra 40.000 seats per month will be added, totaling to 90.000 seats per month.

Entry in The Jet Era

Early 2011, Tiara Air announced it will begin service to 3 new Colombian destinations, after complying with all the requirements and norms based on the rules and regulations of the Aeronautics of Colombia, better known as RAC. The petition for Tiara Air was approved to provide International Air Transport service to both passengers and cargo in the newly announced Colombian routes. In November 2011, the airline announced plans to lease its first official Jet aircraft with which it will be using to expand the airline's network into further Destinations in Colombia and Venezuela, as well as the introduction of flights to the United States.[8] The aircraft arrived in Aruba on 16 February 2012. The second 737-300 is planned for 2013. The airline held a campaign on their official Facebook page for their fans to pick a name for the upcoming addition to the fleet. The name had to have an affinity to with Aruba. Around 400 people participated and the campaign came to a tie between the names "Shoco" and "Arawak", with "Arawak" being the winner.[9]

Along with the introduction of the airline's 737-300, the airline, along with the Aruba Airport Authority N.V.(AAA) opened a hangar to cope with a demand for a hangar to perform maintenance on the airline's fleet. The 42x45 meter hangar, located on the Southwisde of the Reina Beatrix International Airport, was welcomed with a soft opening on July 13, 2012, and is capable of handling an aircraft with the wingspan of a Boeing 737-500 and the maximum load of a Boeing 737-400, and during the opening, Tiara Air Aruba's own Boeing 737-300 was towed into the hangar effortlessly. The hangar is equipped with a system of fire suppression existing of both sprinklers and foam under pressure which is automatically activated in case of fire. It has offices, restrooms and showers and storage space for parts. These areas are fully air-conditioned. The floor of the hangar is completely covered with a special seal meant to repel dust according to international standards of hangars.[10]

As of 2016, the Boeing 737-300 has been returned to its lessor, but will be replaced with larger Boeing 737-400's as part of the airlines restructuring and partnership with Avior Airlines.

The currently uses KIU System for its reservations and check-in, which began in 2011. Prior to using the KIU System, the airline previously used the E-Sav reservation system.

In 2011, through a campaign to promote the island of Aruba, Tiara Air had been branded as the official airline of Aruba. Because of this, most of Tiara Air's fleet had received the official logo of Aruba applied on their fuselage. The modified livery on the Shorts 360 features yellow and blue stripes on the lower part of the fuselage with a grey belly, the logo's signature T and the crown featured on the vertical stabilizer and Tiara Air written above the forward emergency exits along with the star of the Aruban flag. The wheel pants are also grey of color and feature the aircraft type on it written as SD-360 on the aircraft. One aircraft features the official Aruba logo on the forward fuselage with a blue tail with the T and crown in white. The website is also featured.

The 737 features a similar livery with the Aruba on the forward fuselage along with the yellow and blue stripes but does not have a grey belly. The airline also has the blue tail with the white T and crown. The airline's logo is featured above the emergency exit doors on each side and the website is featured on the engines. The aircraft is named "Arawak". Since mid-September 2012, the T on the tail has been modified and the website on the engines have been removed and the logo above the emergency exits have been replaced by the before mentioned website.

Tiara Air's first official livery, was painted on the airline's first SD3-60 (P4-TIA), and featured two waving (yellow and blue) lines on the fuselage with the logo's T and the crown featured on the vertical stabilizer and the waving Aruba flag on the top part. The logo was featured on both sides of the fuselage and the company's slogan (written in Papiamentu) "Na Ora, Comodo y Sympatico" (roughly translated) "On Time, Accommodating and Sympatico" written on the left side. The airline's website was also featured on the Wheel Pants and on top of the aircraft's back exits. The second aircraft (P4-TIB) entered the fleet with a hybrid of its previous owner -Pacific Coastal Airlines- and the Tiara Air logo near the emergency exits. The aircraft then returned to the fleet in 2009, after a C-Check, all white with stickers applied representing Tiara Air, but were later removed until the aircraft received its latest colors. At one point the aircraft also wore a large sticker promoting the Aruba International Film Festival in 2010.

During the airline's operations, the airline's logo has gone through revisions instead of completely changing the font or style in any drastic way.

Tiara Air had operated scheduled flights to 10 destinations across the Dutch Caribbean, Colombia, the United States and Venezuela from Aruba. Scheduled flights were also operated between the islands of Bonaire and Curacao.[11]

Tiara Air's most served destination is to Las Piedras/Punto Fijo. The route was once served by Santa Bárbara Airlines, but since the airline suspended flights between Aruba and Las Piedras, Tiara Air began operating daily scheduled service to Las Piedras.

As of January 2015, the Tiara Air fleet consisted of the following aircraft:[12]

Future plans included acquiring leased Boeing 737-400's and Fokker 50's as part of a partnership with Avior Airlines. Other aircraft operated as leased from other airlines include:

Although fairly small, the airline offered in-flight amenities on board all of its passenger aircraft. On board the Shorts 360, flights longer than 30 minutes offered a juice box and cookies. Early morning flights such as to Bonaire & Curaçao offered Pastechi's (a type of Empanada) along with juice boxes, as well as a copy of one of three different newspapers. On flights to Maracaibo and Riohacha, the airlines served cheese sandwiches instead of the Pastechi's. On board the Boeing 737, complimentary meals were offered.

On 5 December 2011, Tiara Air Aruba performing flight 3P 208 (with registration P4-TIA) from Las Piedras/Punto Fijo Josefa Camejo International Airport to Queen Beatrix International Airport in Oranjestad, with 29 passengers and 4 crew, made an emergency landing in Aruba, after the aircraft hit a donkey on the runway of Las Piedras/Punto Fijo with its right main gear just after becoming airborne causing the right main gear to be bent backwards. The crew decided to continue to Aruba because of better facilities available at Aruba, which is a distance of 50 mi (81 km). The aircraft landed safely at Aruba with no injury on board, although the right main gear had sustained substantial structural damage and was partially collapsed, no injuries occurred.[13]